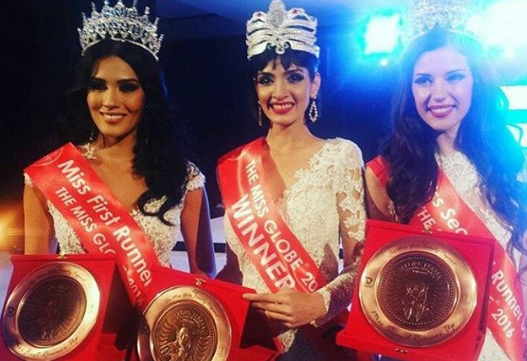 Dimple Patel of India was crowned 2016 Miss Globe at the 25Expo City, Tirana,  Albania on November 25th. Forty young women from around the world competed in the 43rd edition of the pageant. Patel is the first woman from her country to win the title. She was crowned by outgoing queen Ann Colis of the Philippines

Patel's court includes 1st runner-up Yenny Carrillo of Colombia and 2nd runner-up Kristiana Skurra of Albania. Completing the top 10 are the contestants from

Airing Of Miss Universe Pageant In The Philippines Gets Time Slot

DAVAO CITY, Philippines (Philippines News Agency) —The Philippines' hosting of the next prestigious Miss Universe pageant on Jan. 30, 2017 will be aired live on all TV networks at around 8 a.m. to 9 a.m., a tourism official said.
Department of Tourism (DOT) Undersecretary for Media Affairs Kat De Castro made this confirmation in a press conference in Davao City on Saturday urging those interested in seeing the pageant in the Mall of Asia (MOA) Arena to “come early.”
De Castro said that an inter-agency task force composed of the DOT, the Philippine National Police (PNP), the Armed Forces of the Philippines (AFP), the Department of the Interior and Local Government (DILG), the Department of Transportation (DOTr) and the Department of Finance (DOF) was also formed to make sure the staging of the pageant runs smoothly.
She noted that the DOTr and the Metropolitan Manila Development Authority (MMDA) will make sure that traffic is kept at the minimum during the pageant.
“One of the orders of President (Rodrigo) Duterte is when we do the final show, people will not experience traffic because it’s happening on a Monday morning,” De Castro said.
The pageant’s ancillary events will, meanwhile, be held in other parts of the country including Davao, Bicol, Cebu and Vigan. There will also be photoshoots done in Baguio, Palawan, Siargao, Tacloban and Iloilo.
Last November 16, major partners signed an agreement to secure the hosting of the pageant in the Philippines.
DOT earlier said that the private sector would shoulder production costs of the pageant, estimated at $11-15 million.
The official host of the prestigious pageant will be the DOT and the group of former Ilocos Sur Gov. Luis Chavit Singson, LCS Holdings, while its partners include Okada Manila, Solar Entertainment Inc. and SM Lifestyle Entertainment Inc.
The Philippines already hosted the Miss Universe pageant twice, in 1974 and 1994.

It's Official: The Philippines Will Host The 65th Edition Of Miss Universe 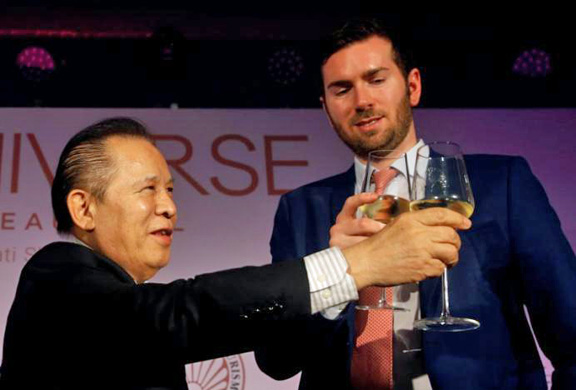 Kazuo Okada, (L) chairman of Tiger Resort, Leisure and Entertainment Inc. and Shawn McClain, VP of Business Development and Marketing at the Miss Universe Organization, take part in the press launch of 65th annual Miss Universe competition to be held in the Philippines on January 30, 2017, during a news conference in Makati city, Metro Manila, Philippines November 16, 2016.
REUTERS/Erik De Castro

Officials and organizers of the Miss Universe 2016 competition confirmed on Wednesday the next pageant will be held in Manila, the capital of the Philippines, in January 2017.

Singson said he was glad to see the Miss Universe pageant "back home."

McClain said the Miss Universe Organization wants to host the pageant in Manila again for its "energetic" and "engaged" fan base.

The live broadcast of the competition draws 500 million viewers worldwide, including many from the Philippines, according to McClain.

The Philippines was the first Asian country to host the annual competition in 1974 and again held the pageant in 1994.

(Reporting by Reuters TV in Manila; Editing by David Gregorio)

***Side Note: I called the Miss Universe Organization early this afternoon to get clarification about the 65th edition of the pageant. I was transferred to the voicemail of MUO Public Relations Director, Jackie Shahinian, to whom I had previously sent two e-mails that remained unanswered (I also sent one to MUO President Paula Shugart). I left a voicemail message for Jackie to call me back. In my e-mails I had asked when MUO would send out a press release confirming the date and the venue of the next pageant. That was a week ago. I find it odd that MUO has not posted an official announcement, even though the current Miss Universe Pia Wurtzbach has been telling the world via her social media that the 65th edition will indeed be held in the Philippines on January 30, 2017 at the Mall of Asia Arena in Manila. Usually, I rely on MUO's official press release to confirm everything, and I was not about to make any travel arrangements to the Philippines without first verifying with MUO, especially when a rumor arose claiming that  the pageant would be cancelled.

Anyway, I am so relieved to know that the venue and date have been officially announced at today's press conference at the Makati Shangri-La.

And since Paula Shugart has not responded to my e-mails, and that she has not been visible lately in the last few months, I would guess that she has either resigned or has been dismissed from her position and that Shawn McClain has now taken her place.


And she keeps the crown!
In July, Miss Universe Honduras Sirey Morán was stripped of her crown, title and being able to participate in the upcoming Miss Universe pageant.
In an announcement, the organization claimed that she had not complied with her contract, according to LatinTimes.
The beauty queen and pageant executives didn't see eye-to-eye when it came to what events and functions she was attending.

When the disagreement happened between both parties, Sirey issued the following statement to E! News: "It is very unfortunate this has happened and I am very disappointed and hurt, violence is never the answer."

She continued, "I am working with proper authorities here in the United States and Honduras and I am confident in how they are handling this situation for me."

Parker — who won the contest in 1994 while representing South Carolina — was caught stealing a pricey pair of headphones at Los Angeles International Airport on Wednesday, TMZ reported.

The 44-year-old, who also works as an L.A. news anchor, reportedly snatched a pair of $200 headphones — belonging to an LAPD detective — from the TSA screening area, according to the gossip site.

Police caught Parker on a security camera and pulled her off her flight before take-off.

Parker could face a charge of misdemeanor theft due to the cost of the gear, TMZ reports.

Parker has received two Emmys for her work as a television journalist. The 44-year-old has also played a journalist on TV in series like "Major Crimes," "Lie To Me," "Monk" and "Days of our Lives."

This is the first time Parker has found herself publicly in trouble with the law.