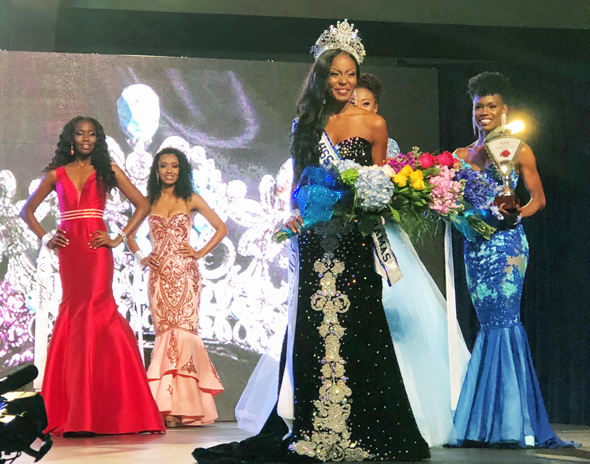 BRINIQUE GIBSON, a 22-year old beauty representing New Providence, was crowned Miss World Bahamas 2018 in the Imperial Ballroom of the Atlantis Paradise Island on Sunday, May 27. She was crowned by her predecessor Geena Thompson. Gibson will now represent the Bahamas in Miss World 2018 pageant to be held in Sanya, China on December 8. Gibson's court includes 1st Princess Serena Greene from Grand Bahama and 2nd Princess Shelly Elisee from the University of the Bahamas who advanced to the top 6 via online voting. Rounding up the top 6 were Angel Cartwright of Long Island, Angel Culmer of Andros, and Chinasa Outten of Balmoral Island. 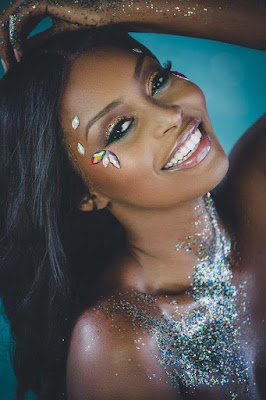 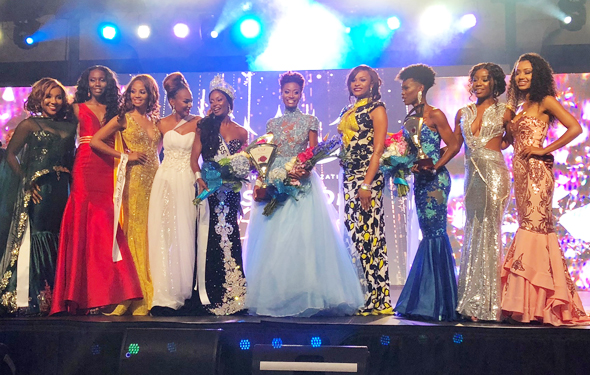 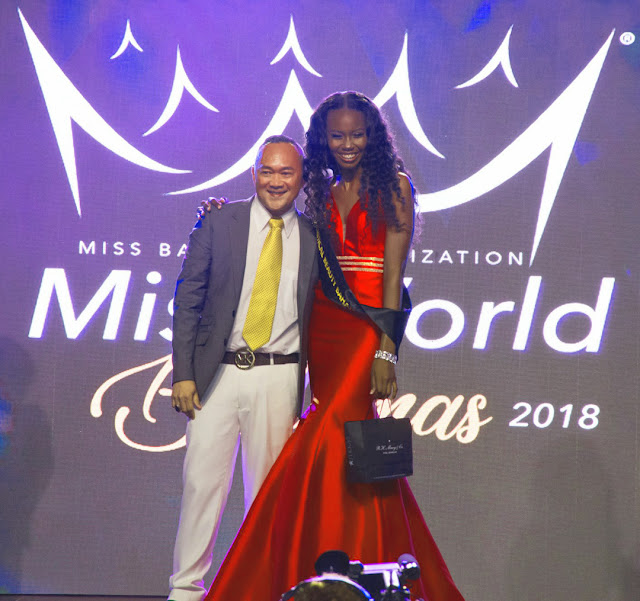 With ANGEL CULMER, Miss World Andros, who won the Miss Critical Beauty Bahamas 2018 award. Her prizes include $300 worth of fashion accessories and $200 in cash.

This was the third time for me to judge the Miss Bahamas pageant, and I have to say that the production has become bigger and better, as well as the sponsorship and prize package. A big thank you to MBO President Michelle Malcolm for being a gracious host. Initially, she had assigned me as a social media correspondent but due to the high-caliber quality of this year's contestants, she reassigned me to judge instead. I think she made the right decision! The Bahamas has selected a strong contender for Miss World this year! 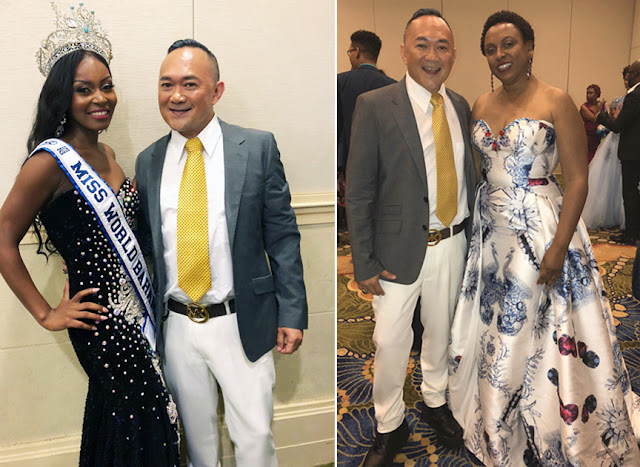 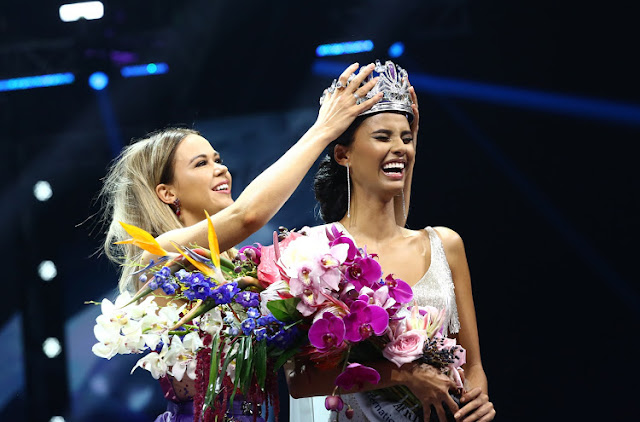 Two new South Africans queen were crowned during the 60th edition of Miss South Africa pageant on May 27, 2018 at the Sun Arena. Tamaryn Green was crowned as  Miss Universe Africa 2018 and she will represent her country at Miss Universe 2018 whose date and venue have not been announced. Thulisa Keyi was declared as the winner of Miss World South Africa 2018 title and will now represent South Africa at Miss World 2018 later this year in China. Completing the top five were Karishma Ramdev, Noxolo Ndebele and Thandokazi Mfundisi. 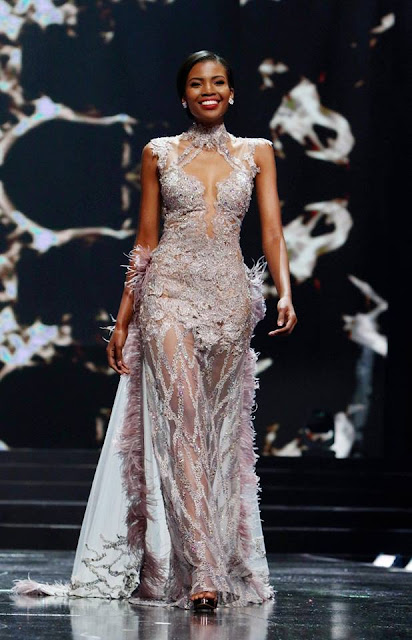 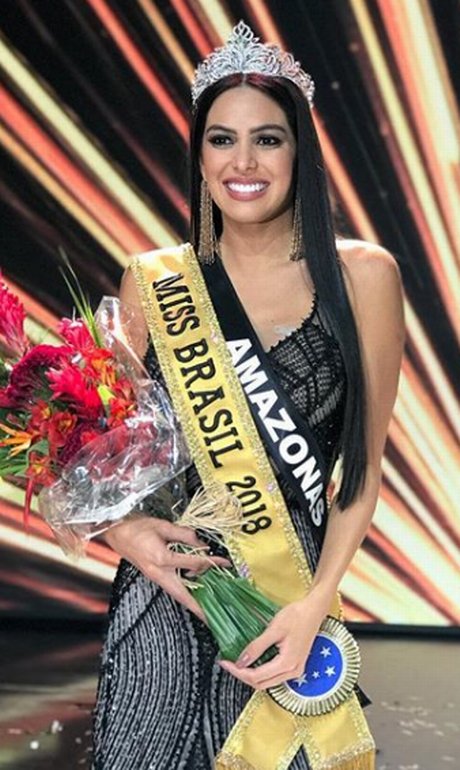 Mayra Dias, representing the state of Amazonas, was crowned Miss Brasil Be Emotion 2018 in Rio de Janeiro last Saturday, May 26. The journalist defeated 26 other young women from all over Brazil for the coveted crown.  The other top three finalists included Teresa Santos from Ceará, and Maria Isabel from Bahia. Dias will now represent Brazil in the next edition of Miss Universe who date and venue have yet to be confirmed. 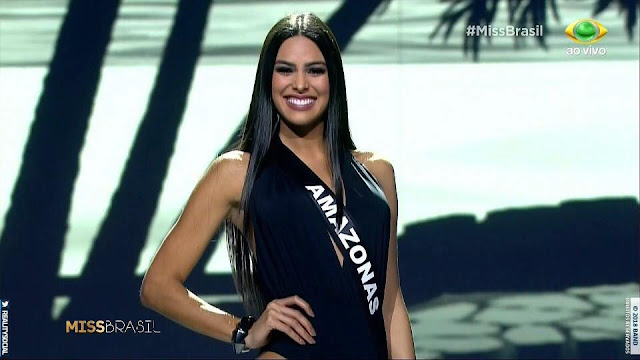 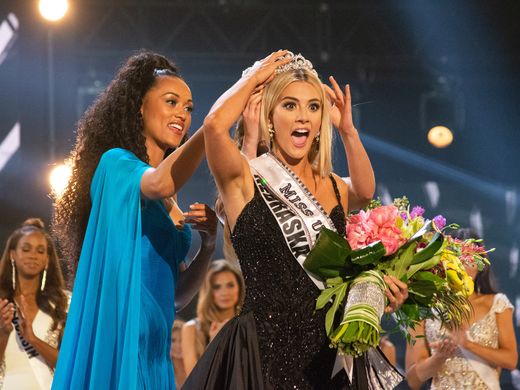 Miss Nebraska, Sarah Rose Summers, has been named Miss USA.
Cheers rang out, confetti flew and celebratory music blared as Summers — a 23-year-old from Omaha — accepted the sash, the dazzling crown and a bouquet of flowers on Monday evening. She takes over from Kára McCullough of the District of Columbia and now goes on to represent the United States in the Miss Universe competition.
For the next year, she'll be a spokeswoman for the Miss Universe Organization. Her responsibilities will include performing charitable acts, attending galas and fundraisers, and making special appearances, among many other duties.
By nabbing the Miss USA crown, Miss Nebraska joins Miss Kansas — the winner Friday of the 2018 Miss Teen USA crown, also in Shreveport — for a heartland sweep of the events held this year in Shreveport and Bossier City. 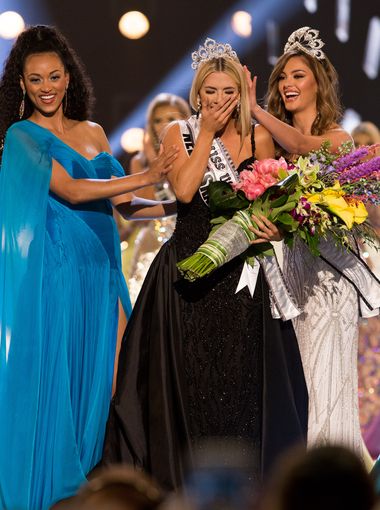 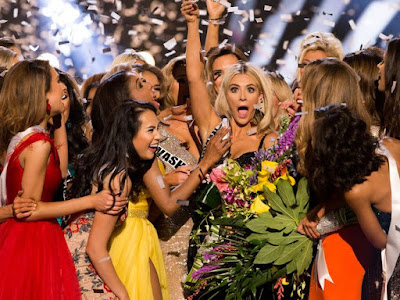 Next, the top 10 were announced and presented in evening gowns. The 10 represented South Dakota, Georgia, Maine, New Jersey, Nebraska, Florida, Nevada, Tennessee, North Carolina and California.
The field then was cut in half, leaving five to answer a question from the judges. The five finalists were Nevada, Florida, Nebraska, North Carolina and South Dakota.
Two more competitors were cut, leaving the top three: Nebraska, North Carolina and Nevada. The three were asked the same question and presented for "the final look."
After scores were tallied, the runner-ups and winner were declared: second runner-up, Miss Nevada Carolina Urrea; first runner-up, Miss North Carolina, Caelynn Miller-Keyes; and winner, Miss Nebraska Sarah Rose Summers.
The Miss USA finals were co-hosted by model and former Miss Teen USA winner Vanessa Lachey and her husband, Nick Lachey, who rose to fame with 98 Degrees.
Lee Brice, a Grammy-nominated American country singer, performed as the 10 contestants presented their evening gowns. Lachey's band performed as the three finalists presented their final looks.
Fashion expert Carson Kressley and supermodel Lu Sierra checked in with behind-the-scenes footage, analysis and commentary about the competition.
On Friday, Hailey Colborn, of Kansas, was crowned the 2018 Miss Teen USA. 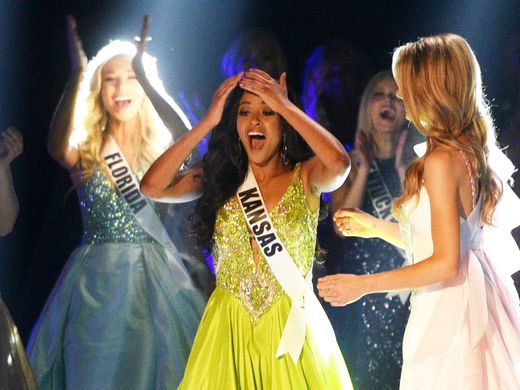 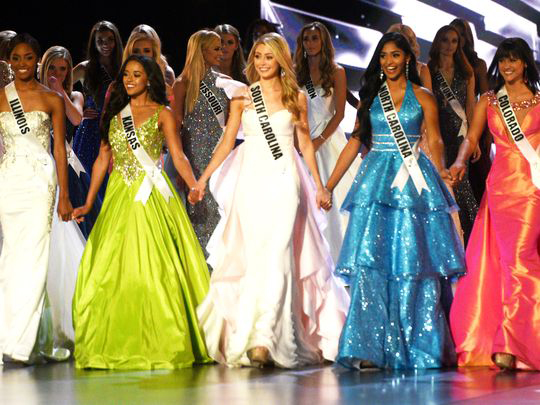 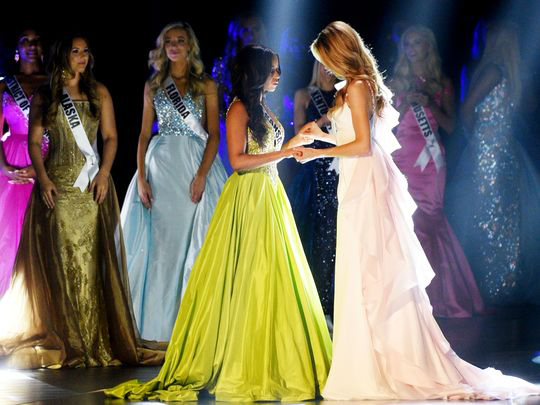 The 2018 Miss Teen USA finals competition Friday evening at George's Pond.
(Photo: Henrietta Wildsmith/The Times)
And in an outpouring of cheers and tears, Miss Teen Kansas was deemed winner and given the crown by her predecessor, the 2017 Miss Teen USA Sophia Dominguez-Heithoff. 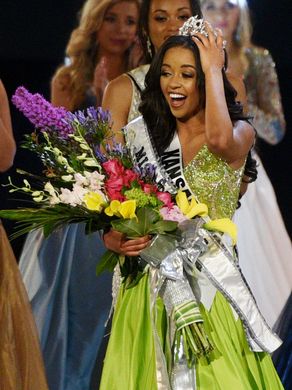 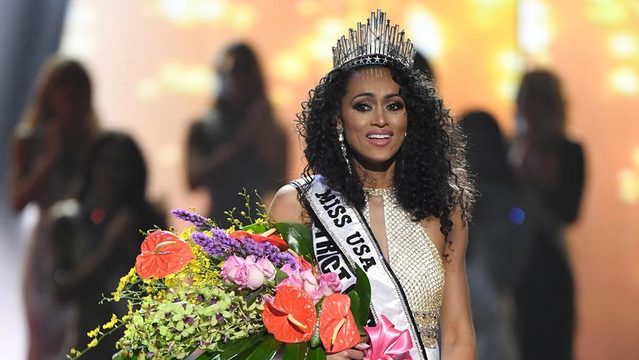 Miss USA 2017 Kara McCullough (pictured) will crown her successor at the 2018 Miss USA pageant at George’s Pond at Hirsch Coliseum in Shreveport, Louisiana.

Well, well, what do you know? The 2018 Miss USA winner will now be chosen by a "selection committee" - which is a politically correct term for "judges." For some reason, the Miss Universe Organization (MUO) has found the word "judge" rather unpleasant and trivial. Not only that, but the "selection committee" will comprise of an all-female jury. That's right. Miss USA has gone sexist! Not one male judge on the panel, not even a gay one. Hmmm.
Here's the report from The Shreveport Times:
The selection committee has been announced for the 2018 Miss USA competition that will be held in Shreveport on May 21.
For the first time, Miss USA will be chosen by a selection committee comprised of female entrepreneurs, business leaders, and industry experts—including former Miss USA contestants—offering a depth of expertise, insight and sustained commitment previously unavailable from one-off telecast judges.
The committee’s diverse perspectives and industry knowledge will help The Miss Universe organization to determine the woman who will become integral to the ongoing growth of the company as a spokesperson for the brand.
The selection committee includes:
Natasha Curry: Award-winning television host and anchor of HLN’s Weekend Express with Natasha Curry; Miss Washington USA 1998.
Jamie Kern Lima:  Founder & CEO of IT Cosmetics, which recently became the largest acquisition in L’Oreal history, making Jamie the first female CEO in L’Oréal’s 100+ year history; 2017 Forbes Magazine’s Most Successful Self-Made Women List; Miss Washington USA 2000.
Crystle Stewart: Television host, model and actress; founder of MISS Academy (Manners, Image, Style, and Success), an organization committed to translating traditional values through pop culture; Miss USA 2008.
Lilliana Vazquez: Emmy Award-winning host and producer, TODAY show contributor and style expert.
Denise White: Founder and CEO of EAG Sports Management, one of the most powerful and influential sports management and PR/crisis management firms of professional sports; Miss Oregon USA 1994.
The 2018 Miss USA pageant will air live from George's Pond in Shreveport on the Fox network at 7 p.m. CST May 21. 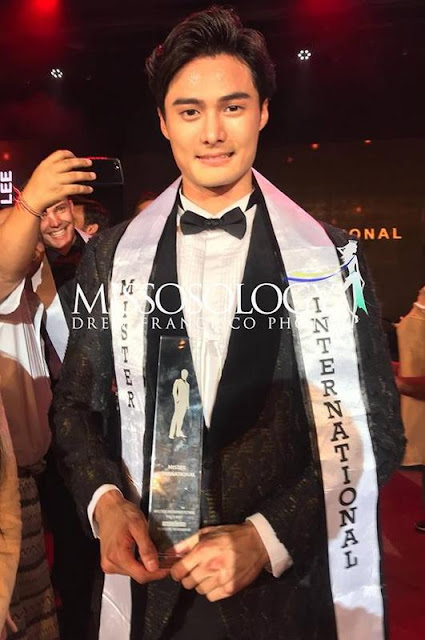 Seung Hwan Lee of Korea won the 12th edition of Mister International held in Yangon, Myanmar on April 30th. He succeeds Paul Iskandar of Lebanon who could not attend the finals due to "unforeseen circumstances." Lee is the first man from his country to win the title. The 2017 pageant was supposed to be held last November but was postponed until April 2018. Technically, Lee is the winner for 2017.
Completing Lee's court are first runner-up Manuel Molano of Colombia and second runner-up Dwayne Geldenhuis of South Africa. The remaining top five included Minh Trung of Vietnam and Alessandro Costantini of Switzerland. 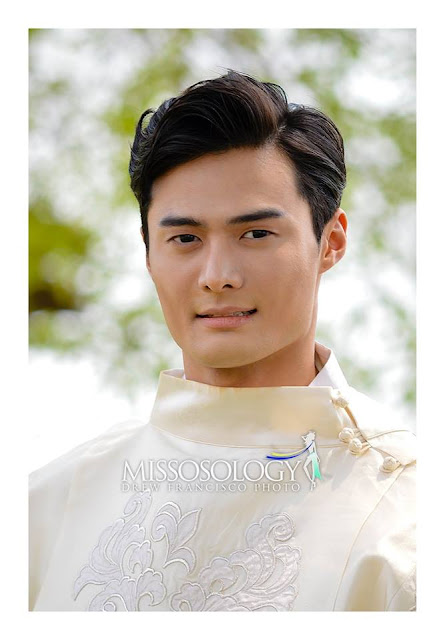