The Miss Bahamas Organization (MBO) crowned three new Bahamian queens for 2015 on Sunday night, September 13, at the Atlantis Paradise Theatre in Nassau.  Proclaimed Miss World Bahamas 2015 was Chantel O'Brian, 21, who will represent the Bahamas in 2015 Miss World pageant in Sanya, China on December 19.  Miss Universe Bahamas 2015 is  Toria Penn, 27, who will compete in the next edition of Miss Universe whose date and venue have not been confirmed.  And Miss Earth Bahamas 2015 is Darronique Young, 25, who will compete in 2015 Miss Earth pageant to be held in Vienna, Austria on December 5.  O'Brian was crowned by 2014 Miss World Bahamas, Rosetta Cartwright. Young was crowned by 2014 Miss Earth Bahamas Vandia Sands. Penn was crowned by MBO President Michelle Malcolm.

Sienna Evans, 18 (farthest left) was named first runner-up for Miss Universe Bahamas, while Tavette Darville, 25 (farthest right) was named first runner-up for Miss World Bahamas. The new queens were crowned in two separate shows. The winner of Miss Earth Bahamas 2015 was chosen from the five contestants competing for Miss Universe Bahamas 2015.  Darronique Young is the first Miss Earth Bahamas to be crowned under the tutelage of Miss Bahamas Organization (MBO) which recently acquired the franchise. This year is also special because it marks MBO's tenth anniversary. 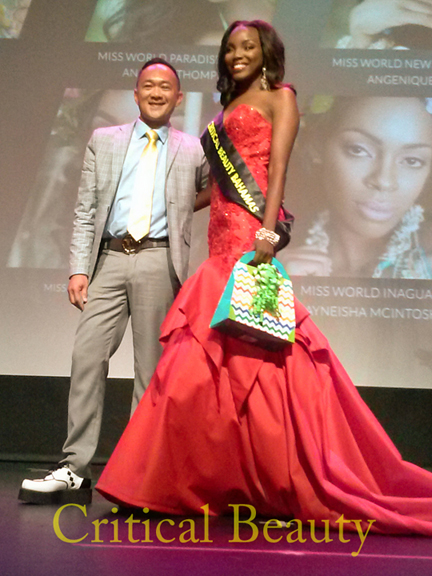 Critical Beauty director Rafa Delfin was part of the judging panel for Miss World Bahamas 2015. He presented the Miss Critical Beauty Bahamas 2015 award to the contestant who best demonstrated the perfect balance of style and substance. The lucky winner was Chantel O'Brian, Miss World Grand Bahama.

One of the highlights of the event was the presentation of Celeste Marshall, Miss Universe Bahamas 2012, who had just won 1st runner-up in the recently concluded Top Model of The World 2015 contest. In the photo above, Celeste is cheered by the crowd as she is interviewed by co-hosts Leslia Brice and Jerome Sawyer.

This was my first time to judge the Miss World Bahamas pageant, but my second visit in the Bahamas (I judged Miss Universe Bahamas in 2013). I would like to express my deepest and sincerest gratitude to the entire staff of the Miss Bahamas Organization, specially to its formidable and beautiful president, Michelle Malcolm, for inviting me to serve in the judging panel. Lastly, I also wish them a very happy tenth anniversary and all the best of luck in their future pageants!