Following Guy Rinaldo's death in 1992, Antoine de Villejoie was chosen by his colleagues as the new president of CMF. His presidency was officially recognized on May 11, 1993 by the Appellate Court in Aix-en-Provence. On June 20, 1995, a court reconfirmed De Villejoie's presidency and discredited Mulmann's "Comité Miss France," stating that her committee lacked the same moral traits that the original committee - the one that Rinaldo founded on October 21, 1954 - had. Mulmann, now even more bitter than ever, continued to express her hatred towards the real CMF. She launched her own "Société Miss France" with her son Xavier Poirot and adopted the title "Miss France" as a commercial brand - which is illegal because it infringes on the copyright of CMF that has owned the title since 1954. This infraction proved once again Mulmann's desperate attempt to make the world believe that she is the real president of CMF and that CMF was created by her husband Louis de Fontenay.

If the father was a crook, and the mother is a liar, then the son must have a short fuse. Xavier Poirot has gained the reputation for being a short-tempered and violent man. One time, during an outburst of anger, he hit his mother on the head with a lamp (was she not wearing a hat?). The neighbors had to call the police and Mulmann had to be consoled by her friend Geneviève Leblanc. In January 1988, Xavier attacked T.V. personality Jean-Claude Bourret after the latter featured a show about the Miss France controversy. Bourret, who happens to practice martial arts, knocked Poirot out in a second. Bourret exclaimed, "This young man was badly brought up and his behavior needs a spanking, so I gave him one right after he hit me."

One of Poirot's most publicized manifestation of fury occurred twenty years ago when a former Miss France, Isabelle Turpault (1983), accused Poirot of punching her in the face in broad daylight as she was shopping at Champs-Elysées. Poirot later admitted to the crime; he reasoned that he had to defend his mother whose reputation was being damaged by Turpault who had posed in transparent attire for a magazine. Mulmann fired Turpault and defended her son by stating that he was a "gentle and nice boy" who would never hurt anyone (France Soir) and that "he was at his grandparents' house in Lorraine" during the incident (Le Parisien).

THE CASE OF THE TWO MAREVAS 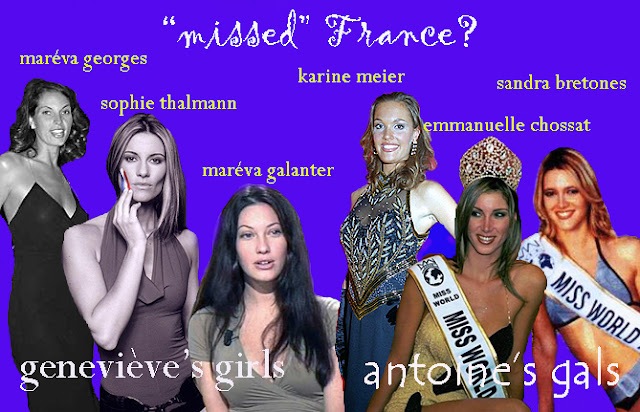 There is substantial reason to believe that the 1991 election of Maréva Georges on the television channel TF1 was fixed. According to the newspaper Le Provençal (January 15, 1991), Georges knew from the beginning of December 1990 that she would be crowned Miss France 1991 on December 30, 1990! As a matter of fact, Jean-Pierre Giran, the dean of the university that Georges was attending (Aix-en-Provence), said that she had asked him - a few weeks before her election - to move the exam dates because she was expecting to participate in the 1991 Miss Universe pageant in Los Angeles. Why was she so certain of becoming Miss France?

The election of Georges was not as subtle as that of Miss France 1999, Maréva Galanter. In an interview published in the magazine Entrevue (issue no. 79), Galanter hesitated to elaborate on the charges that her election as Miss Tahiti was fixed. Who would not suspect her victory when her own agent is a member of the Miss Tahiti Committee, that a distant uncle (entertainer Sacha Distel) is the jury president, and that her grandmother is the one who has been making Mulmann's hats for over two decades? During a televised coronation night on channel TF1, viewers were asked to vote for their favorite delegate by telephone. Each call cost 3 francs and 71 centimes for 2 francs and 23 centimes per minute. That year, the voting system has not changed: 2/3 for the nine members of the jury, 1/3 for the public consisting of millions of televiewers. Mulmann, of course, did not abide by this system; she hinted that the perception of televiewers was not as fair as that of the jury.

Mulmann wanted to modify the system to favor Galanter, and not the popular delegate from Berry, Aurélie Rudler who received over 300,000 telephone votes, yet ended up only as second runner-up, nor the first runner-up from Paris, Pamela Semmache, whom most viewers thought was much prettier than Galanter. The press suggested that the pageant was fixed, that the viewers' votes did not count for anything, and that TF1 profited from the naïveté of the viewing public. During her reign, Galanter posed nude in an issue of Entrevue - an act that horrified Mulmann who stated that Miss France should be a fashion ambassador with a healthy mind and body. Mulmann requires Miss France to maintain a wholesome image during her reign and during the next five years. Galanter regretted posing nude and apologized to Mulmann who forgave the Polynesian beauty.

Several former delegates, disappointed by the corrupt elections on TF1, expressed their resentment in various regional newspapers. Some called or wrote to CMF to complain. One ex-queen, Sophie Thalmann (1998), went as far as publishing her unpleasant experience with Mulmann and her son Xavier Poirot in her book,  Ça fait quoi d'être Miss France? L'envers du diadème. Some of the most amusing anecdotes include the moment when Mulmann gathered the leftovers from a cocktail party and put them in her purse - a habit that she apparently picked from Louis Poirot who, during parties in the 1960s, would carry a bag in which he would throw pieces of cheese and other edibles.

Page after page, Thalmann would complain about Mulmann's odious character and of their numerous "catfights" through faxes. She also suffered from Xavier Poirot's fury. In the magazine Gala, Mulmann - referring to Thalmann's book - accused the beauty queen of lying - this coming from someone who is the queen of fraud herself! De Villejoie stated in Vérité? that his office - after each election on TF1 - would receive numerous letters from televiewers who demand that questions be asked to certain delegates. Some people, disheartened by the methods used on TF1, would also complain. De Villejoie communicated with TF1 officials on several occasions, but they never replied back, even when de Villejoie volunteered to offer resolutions. 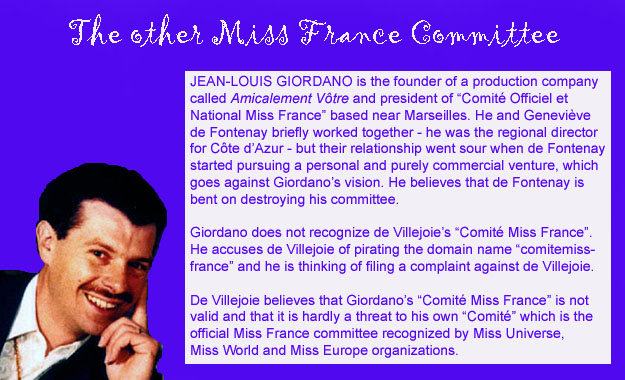 NEXT PAGE: THE BIAS IN THE MEDIA