The prelims will take place tomorrow at the Mandalay Bay Resort & Casino and everyone wants to know which designer will dress which girl and so forth. Expect Miss Puerto Rico Mariana Vicente to look sharp during the evening gown competition. Unlike past Puerto Rican queens who had been dressed by famed Puerto Rican designer Carlos Alberto, Mariana will be wearing a gown by another big Puerto Rican designer, Luis Antonio. That's right. National director Desirée Lowry ditched Alberto for a younger - and perhaps more versatile Antonio. In an exclusive interview with Antonio for Héctor Joaquín Blog, the designer reacts to Alberto's statements - published in today's El Nuevo Día, which suggest that the "beauty queen designer" is sad that he is not dressing the candidate of his country; the article mentions that Alberto is dressing up the delegates from Ireland, Mexico, Colombia and Slovak Republic, though this remains to be confirmed. 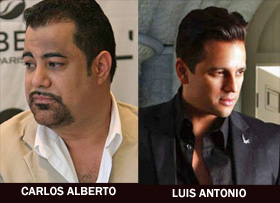 Taken aback by Alberto's claims, Antonio - who is already in Las Vegas - commented to Héctor Joaquín via telephone [my translation]: "First of all, Carlos Alberto is a designer who made a name for himself only by dressing up beauty queens, which I admire, but personally in my career as a designer, I've had the honor and pleasure to dress not only beauty queens but also Hollywood actresses like Jennifer Lopez, Jennifer Morrison at the Golden Globes Awards, Jamie-Lynn Sigler from the HBO series 'The Sopranos,' and my clothes have travelled all over the world, which makes me feel proud and satisfied. I congratulate Carlos Alberto for his work which has gained international exposure, but we're not in the same category. Besides, this year, the image that Mariana has presented so far is that of an international model, and more than your typical beauty queen - and that's one of the reasons why they selected me to design all the clothes that Mariana will be wearing during the preliminaries and the finals."

Does it really matter which designer dresses up a beauty queen, as long as she looks fabulous? Share your thoughts in CB Facebook!