Hector and I interviewed several girls during the Press Junket yesterday morning from 7:30 to 9:00 AM at the Penthouse Lounge of the Mandalay Bay Casino & Resort. But first, a shout out to MUO staff members Brittany and Jennifer for assisting with our press credentials and facilitating the interviews. Thank you, girls!

Forty-seven girls showed up at the event and some looked more presentable than others. I can tell you that the pics hardly do justice at all, and some girls look much better in photos than in person. Hector and I took turns interviewing the girls in English and Spanish, as well as taking photos and videos of them. We had the opportunity to speak with the following contestants, and here are our impressions of each of them:

Puerto Rico - Mariana Vicente looks like a precious, porcelain doll and is very spontaneous, but her tight and short dress made her appear like a little girl. She has definitely the best pair of legs!

Mexico - Ximena Navarrete has a beautiful face, but she hardly smiled and didn't seem to like being interviewed. She also looked tired and as if she didn't want to be there. Originally, she was on my top 5 list, but now I don't even want her to be in top 15. The most disappointing in the bunch.

Brazil - Debora Lyra is stunning, charming, captivating! She has lost a lot of weight and looks spectacular! She said she would love to be in the entertainment industry and perhaps have her own show in the U.S. I couldn't get enough of this young woman - she's simply divine! She makes my top 10 easily.

Great Britain - When I asked Tara Vaitiere Horos how is she different from past British representatives, she said that she is much more prepared and focused in winning. Though she seemed to speak with an authentic English accent, Tara is very much proud of the fact that she is the first elected Miss Great Britain of Latin (Colombian) roots. This young woman is so much prettier in person and I am glad I was able to chat with her. 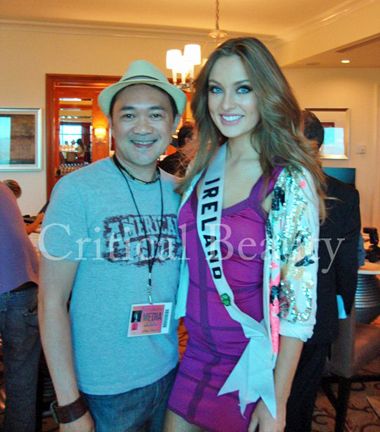 Ireland - OMG! Rozanna Purcell is like the coolest gal in the bunch! The cameras love her and she certainly knows how to work it! She is gorgeous, funny, warm, affectionate and a doll! I asked her if her lips were real and she said, "I will have my father tell you that they are!" And when I pointed at her bosom, she exclaimed: "I am flat!" We both laughed! Ignore what her detractors say about her on the message boards. Rozanna is here to win! Ireland may very well have its first Miss Universe!

Haiti - Sarodj Bertin looks so much better in person; she's very tall and looked sexy in a two-piece dress with animal print that showed her midriff. When I asked her if she wanted to run for presidency in her country, she said she is not interested in politics and that she could help her country more as a private citizen. She strikes me as someone sincere, sweet, stylish and intelligent and I definitely want her to be in top 5!

Bahamas - Undeniably Braneka Bassett is the best representative from her country in Miss Universe so far! This former Janice Dickinson model has got what it takes to be Miss Universe - she exudes a lot of class, elegance, poise and of course, beauty. When I asked her how she and her roommate Miss Trinidad and Tobago are getting along, she said that she feels like they're sisters. I sensed Braneka can do no wrong and she is very determined to win!

Japan - Maiko Itai is perhaps the most stylish and the best-dressed Asian candidate. I told her that I was sad that her director Ines Ligron could not come to Las Vegas, and she gave me an impish, sad gesture. Maiko is soft-spoken, refined, and has a beautiful skin.

USA - Rima Fakih is the kind of girl that you want to be friends forever. Rima is profound, warm, genuine and much prettier in person. Talking with her is like talking with an old friend. She's very attentive. About her topless photo, I jokingly asked her if she has received any death threats from Al-Qaeda or Hezbollah, she gleefully replied, "Not yet!" I didn't ask her about her religious beliefs (though I was tempted to), but I did tell her that pageants should stop asking girls questions related to sex, politics or religion, and she agreed. Rima wants the world to know that her boss Donald Trump is doing an excellent job running the pageant, at least from a business perspective. Go USA! Americans are proud of you! 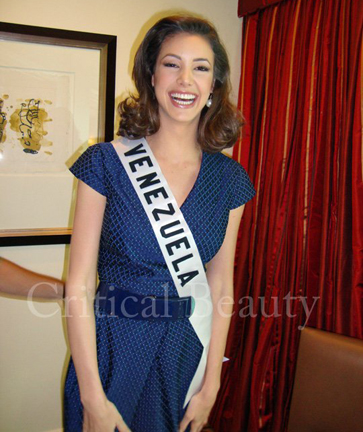 Venezuela - Is it possible for Venezuela to win three times in a row? A resounding yes! Marelisa Gibson is the most exquisite candidate from Latin America this year. She is tall and poised, and exudes remarkable calm, confidence, and elegance. When we asked her about the political situation in her country, she said that she would like to tell Venezuelans that beauty pageants should unite her people regardless of their political differences. Marelisa has the looks of a loveable and glamorous Hollywood movie star and it was too hard to find any faults in her (I didn't see any), She was the only contestant in the group that actually said goodbye to Hector and me after the interview, which touched us both.

Philippines - Venus Raj, perhaps the most hyped candidate this year, lives up to the hype. Hector and I are in love with her for everything that she is - humble, stunning, articulate, intelligent, stylish, and simply mesmerizing. As a Filipino American, I am very proud that Venus is representing the land of my birth. I hardly sensed anything fake about her; she's pure joy to talk to - even more so when we spoke in Filipino. She's real, she doesn't put on airs, and yeah, she's got it! Oh baby, she's got it! The Philippines is back in the game, and Venus is her name!

In the original list of countries to be interviewed that I had sent to MUO a week earlier, I had included Lebanon and Egypt, but at yesterday's Press Junket I didn't even have the chance to see them. A staff advised me that the two candidates - looking disenchanted - left after being interviewed by the news media that included Telemundo and Primera Hora. And speaking of media coverage, there were several media outlets - in print, electronic or television - that came to the event. Hector and I noticed that most of these so-called reporters or journalists took more time taking pictures of the girls than actually interviewing them. One reporter only interviewed two contestants. The majority of reporters came from Latin America. NBC did not even show up. Among online and electronic media, Critical Beauty is proud to have interviewed the most number of contestants.

After the Press Junket, Hector and I attended the rehearsals that started at 2:30 PM, and then the Preliminaries that began at 7:00 PM. My thoughts on the prelims should be posted within the next few hours, so come back soon!