By  Armin Amari  for Critical Beauty 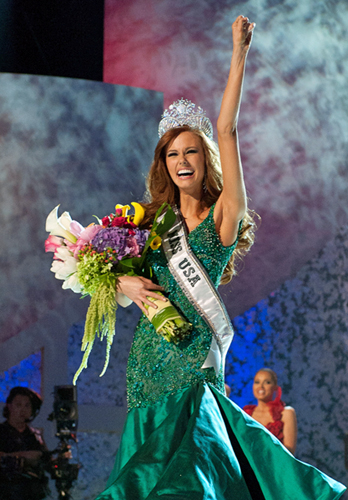 21 year-old Alyssa Campanella, who represented the state of California, beat out 50 other contestants to win the title of Miss USA 2011 held at Planet Hollywood Resort & Casino Theater in Las Vegas on June 19th. Campanella’s victory marked the pageant’s 60th year. Never in Miss USA history has a contestant vying for the national crown been so favoured and overwhelmingly hyped like Campanella. She topped almost all lists belonging to pageant pundits, fans and betting agencies. However, this massive wave of favouritism is not too surprising considering Campanella’s past pageant success (she placed 1st runner-up to Hilary Cruz at Miss Teen USA 2007) and Miss California USA co-director, Shanna Moakler, fervently worked the message boards posting new images and information about her protégée night and day for months leading up the competition. I never thought I would experience Christmas in June but this year’s Miss USA pageant reminded me of the yuletide holiday by way of several quirky similarities. 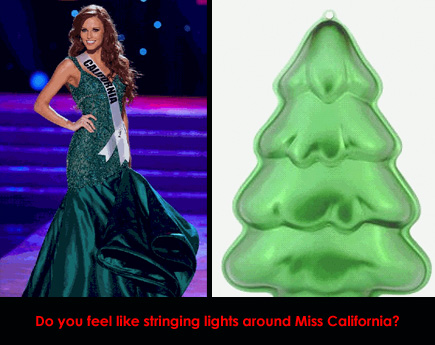 THE TREE : Alyssa Campanella’s green evening gown was polarizing to say the least. While some thought the Sherri Hill frock was fashion forward (the design was a cheap replica of Versace couture) others thought that Miss California looked like a mobile Christmas tree, complete with ornaments, if you count the earrings. Many gasped as Campanella tripped during the presentation show evening gown competition (was I the only one who heard "Timber!" being yelled in the distance?) and consequently fans started to question her future success in the competition. However, like the iconic Christmas conifer, Miss California was able to leave her festive impression on the judges and by the end of the 2 hour live telecast, the catwalking Christmas tree was topped with its final and most glittering adornment, the prized star (Diamond Nexus crown).


THE ELVES : A mere two days before the live finale, the Miss Universe Organization published the list of "celebrity" judges who would determine the final results of the pageant. I do not know where MUO found this bunch of yokels but aside from the ravishingly gorgeous Miss Universe 2006, Zuleyka Rivera, none of the other retarded elves were qualified to judge a beauty contest. Lil Jon was wearing sunglasses during the entire show (real cool, you idiot!) and Caroline Manzo couldn’t even read the interview question that was obviously written for her by pageant officials. I think it is high time that MUO gets the memo that these D-class celebrities do not yield higher ratings because a) they are losers and b) a two day notice is not enough time for the fans of these celebrity wannabes to tune in. Speaking of elves, co-anchor, Kelly Osbourne, looked as if she was plucked out of Santa’s toy shop and brought to Las Vegas. While her garden gnome looks are not television friendly, I actually liked her honest commentary on the pageant and especially the evening gowns since Susie Castillo was in pageant mode and tried to sugar coat everything. I’m just glad Castillo wasn’t patted down the wrong way at the airport on her way to Las Vegas or we’d never hear the end of it!


THE PRESENTS : This year, a special present was given to one of the 51 contestants in the form of direct entry into the semifinals by means of a fan choice vote. For weeks, Americans cast their votes ultimately allowing Miss New Mexico, Brittany Toll, to compete for the title of Miss USA 2011 only to be instantly eliminated after the swimsuit round. However, the real gifts of the night were the commemorative clips of vintage Miss USA pageants as well as the attendance of 36 past title holders. The Miss USA winners, ranging from having won in 1953 all the way to 2010, celebrated the pageant’s 60th year with a reunion and autograph signing a few days before the finals. Many even brought the gowns, sashes and crowns that they wore the nights they won. It was a great treat to see photos of this event and to know that security was able to keep sticky fingered pageant enthusiasts from snatching away any memorabilia for their personal collections (you know who you are)! However, the segment given to the formers during the live telecast was abysmal. I realize MUO is given strict time guidelines by NBC but having the cameras pan the audience while all the invited formers were sitting isn’t what I call a salute. You know something isn’t right when the USO receives better recognition at Miss USA than past Miss USA queens. That was one gift I wanted to return for store credit! 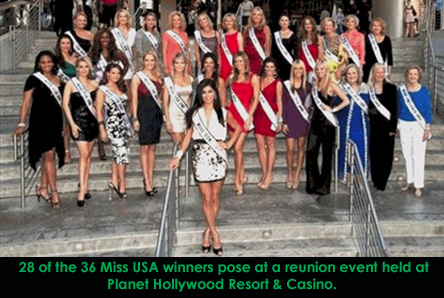 TOO MUCH EGG NOG : You know the feeling you get in the pit of your stomach when you’ve downed 13 glasses of egg nog? Well, I experienced that same sensation on more than one occasion during this year’s telecast, the first and foremost being the lame fan interactive voting scorecard, which turned out to be more than annoying. The meter effect was highly distracting, the scorecard itself was cut off and hard to see, and fans at home were complaining that the function either did not work for them or that the segments were so quick that by the time they punched in their personal scores, the next contestant was already out on stage. Instead of building enthusiasm and excitement in fans, this cheap gimmick enraged the hell out of most of us. Thanks ipowow and MUO for using us as guinea pigs in this failed experiment. 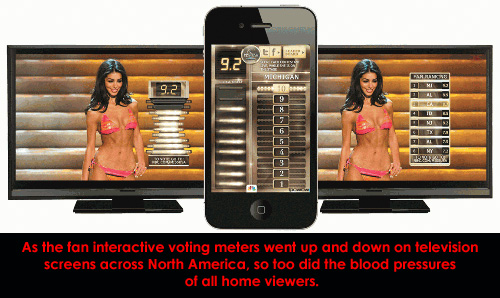 The elimination format employed for this year’s telecast was also rather wonky. Initially, I enjoyed the Top 16 results as the delegates were standing by geographic region. However, as the night progressed, it was apparent that Dick Clark Productions was unsuccessful in keeping suspense when semifinalists were eliminated in groups. After the swimsuit round, it was crystal clear that groups 2 and 4 were going to advance based on the women comprising each. Furthermore, my heart goes out to the semifinalists who placed 10th, 9th and 5th since they would have been able to advance one more round had the pageant followed the 15-10-5 format of previous years (this year 16-8-4 was used), which is probably why MUO decided not to televise the judges’ scores this time around.

Dressed in a Pee Wee Herman suit that was 3 sizes too small and paired with vintage L.A. Gear high tops, Tiny Tempah, looked like a total bozo. I don’t know why a rap song was chosen for the evening gown competition because it was totally confusing. The Top 8 didn’t know whether to walk gracefully or to strut their stuff (the super stunning Miss Tennessee, Ashley Durham, fell victim to this the most) and having the contestants pose at a piano being played by a greased up Kevin Federline look-a-like didn’t scream elegance or runway show. Too bad I wore out the mute button on my remote control from last year’s Miss Universe telecast or I would have watched the evening gown segment with no volume!

Speaking of tongue-tied twits, host Andy Cohen’s pronunciation of Ximena Navarrete’s name (he called her Zeemenuh Navarté) made me question what the hell he is doing as television host. In addition, Miss Alabama, Madeline Mitchell, personified pageant patty with her Lu Parker "educator" inspired responses to her on stage interview questions. She definitely should have placed behind Miss Texas, Ana Rodriguez, who aced both interview rounds with her wit, humour and finesse! 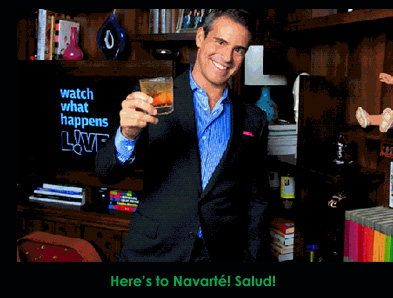 And props to MUO for totally snubbing the current Miss Teen USA, Kamie Crawford, who was standing right next to "Navarté" just before the coronation. But Kamie wasn’t the only African-American who was left high and dry since none of the black contestants were able to penetrate the semifinals despite strong showings from Miss Illinois, Angela Sparrow, and Miss District of Colombia, Heather Swann.


THE ANGEL & THE DEVIL : What’s Christmas without a little religious symbolism? After Campanella’s questionable presentation show performances, many pageant fans kept an eye out for other contestants who could capture the crown with their fresh faces, fluid catwalk and seductive stares. The two who emerged as front-runners were diametrical opposites: Miss Massachusetts, Alida D’Angona (the angel), and Miss Michigan, Channing Pierce (the devil). While angelic Alida won the hearts of many with her flawless face, vibrant personality and a classic white Gionni Straccia gown, pissed-off Pierce dazzled with her modelesque moves, her "who gives a f—k?" attitude and a dramatic black gown (The Devil Wears Marchesa)! Ironically, both exceptional competitors were excluded from the Top 16, which shocked many since D’Angona was being hailed as Campanella’s biggest threat going into the finals. Coached by Critical Beauty creator Rafa Delfin, Alida’s beauty matched her brains and her exclusion was definitely Satan’s doing! But no fear, Miss Massachusetts is worthy of getting her wings as a Victoria's Secret angel and there is no doubt that she will go as far as the heavens! 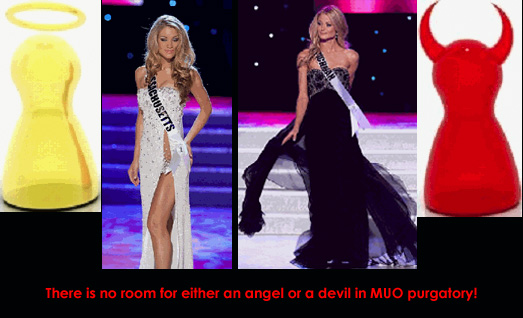