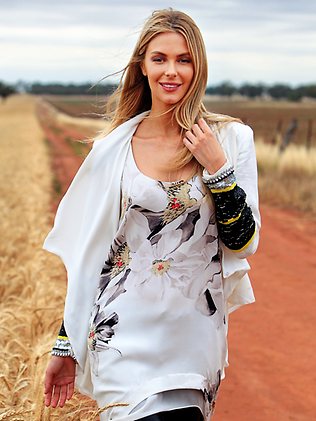 Aussie models Miranda Kerr, Abbey Lee Kershaw, Jennifer Hawkins (photo above) and Elle Macpherson have all made the model rich list.
Grazia magazine published a list of the 11 highest paid models in the world in their latest issue and listed Kershaw’s earnings as more than the Royals.
They reported the Melbourne-born model earns $100, 000 a week, making her one of the highest paid models on the planet.
Supermodel mum Kerr has a net worth of $11.4 million, while Hawkins earns $5 million a year.
However, industry veteran Macpherson dwarfs all of their salaries with a total worth of $57 million.
Kathy Ireland was listed as the richest model in the world with a fortune of $333 million. Controversial supermodel Kate Moss is worth $75 million, while her rival Naomi Campbell has $47 million.
Tipped by Forbes to become the “world’s first billionaire supermodel”, Gisele Bundchen is well on her way there with an estimated fortune of $238 million.
Runway stalwarts Claudia Schiffer and Heidi Klum are worth $52 and $68 million respectively.
TV personality Tyra Banks is another one of the big earners with profits from her television and beauty empire worth $85 million.
The latest issue of Grazia is out now.
SOURCE:  Adelaide Now, 3/19/2012