March 11, 2012
When you think “pageant queen,” you might get an image of a little girl on Toddlers and Tiaras aged a couple decades -- someone who’s been competing and earning crowns for years. But that’s not true of Kelsey Beck, a Harvard sophomore, self-acclaimed tomboy, and this year’s Miss Boston. 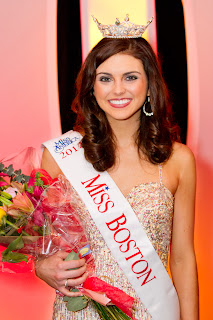 “I have never done pageants before, but my mom was Miss Florida back in the day, and it paid for her entire undergraduate education,” Beck said. “So it’s always been in the back of my mind as a way for me to help my parents with scholarships.”

The 20-year-old Winter Park, Fla., native was recruited by Harvard for volleyball, but she decided that this past season would be her last so that she could focus her time on academics and community involvement instead. “And what better time, since I’m not playing volleyball anymore, to give [pageants] a try,” Beck said.


Now that she’s won the Miss Boston title, Beck will spend the next few months preparing for June’s Miss Massachusetts pageant, in which she’ll compete against other local pageant winners like Miss New Bedford, Miss Foxboro, and Miss Taunton for a spot in the Miss America pageant. She’ll also be making public appearances and doing volunteer work, including implementing the “Adopt a Grandparent” program in local elementary schools, as part of her Miss Boston duties.

“This year’s pageant exceeded all of our expectations. We are proud to have Kelsey as Miss Boston 2012, and we look forward to preparing her for the Miss Massachusetts competition,” Miss Boston executive director Stephanie Janes told Wicked Local. “Kelsey will be a great representative of our organization, as well as a wonderful role model for young women.”

Beck said that her supporters -- friends, family, and other members of the Harvard community -- have continued to encourage her, even after her Miss Boston win. Loren Galler-Rabinowitz, a Harvard graduate and former Miss Massachusetts, reached out to offer her support before the pageant. “It was so nice to have someone reach out to me and know that I was being encouraged and supported,” Beck said.

Beck said that she believes her personal platform issue, advocating for the elderly, will help her stand out in the Miss Massachusetts pageant. Her parents brought her to visit nursing homes beginning at a young age, laying the foundation for her future career goals: law school and becoming an elder care attorney.

“My platform definitely plays into my future because I am so passionate about it,” Beck said. “I would love to, as an elder care attorney, educate families of the options they have available to them. I believe there is a lack of knowledge when it comes to caring for your elderly, your family, as they get older.” In addition to her dedication to her platform, Beck said that she believes she can be a role model by helping others find their purpose in life.

“I have always looked at pageant women as role models,” she said, “and I have such great things to say about the Miss Boston organization as a whole because it does foster the passionate, driven young woman, which is very similar to the Harvard woman, whom I can identify with.”