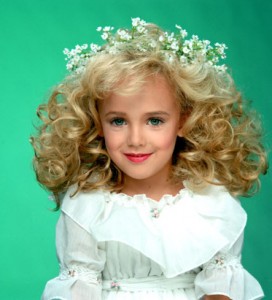 (CBS News) Years before the TLC show "Toddlers and Tiaras" hit the small screen, there was JonBenet Ramsey (above), a six-year-old beauty queen whose Dec. 26, 1996, murder gripped the nation.
Now, 15 years later, the children beauty pageant circuit has come to the forefront, with the culture glamorized on television, and JonBenet's dad finds it bizarre.
What did JonBenet's father, John Ramsey, have to say about the beauty pageant culture now?
John told ABC News that he has only caught snippets of the series, but says, "It's very bizarre ... And, it certainly - Patsy [JonBenet's mother] and JonBenet didn't approach it that way ... They just did it for fun."
"Patsy had just come out of cancer treatments, I think deep down she didn't know how long she had to live and how much time she had to spend with her child, so she tried to pack a lot into a day," he explained.
Still, even back then, he didn't like all aspects of the beauty competitions.
"I saw an element of competitiveness that I thought was unhealthy," he said, adding, "I used to always tell her [JonBenet] that it's your talent that counts, don't worry if you're not always the prettiest."
John visited "Good Morning America" to talk about his new book, "The Other Side of Suffering."
JonBenet's killer still has not be found. At one point, her parents were under investigation, but have since been cleared. JonBenet's mother died in 2006 of ovarian cancer.
SOURCE: CBSNews, 3/14/2012