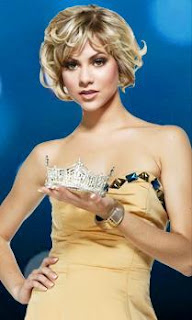 (CNN) -- Kirsten Haglund was 19 when she became Miss America in 2008, one of the youngest beauty queens ever to win the national title. She used that platform to speak about what for her was a very sensitive subject: eating disorders.
"I realized what's making an impact on other people's lives is not this perfect image of the American ideal," she said. "It's a true human story of struggle and triumph."
Unlike many of her fellow contestants, Haglund didn't spend her childhood competing in pageants. Instead, the Michigan native dreamed of performing as a professional ballerina. The pressures of trying to live out that dream led her into the nightmare of anorexia nervosa at age 12.
Anorexia nervosa is an eating disorder that causes people to obsess about their weight and the food they eat, according to the Mayo Clinic. People with the disease try to maintain a weight that's unhealthy for their age and height.
Read more.
SOURCE: CNN, 3/15/2012