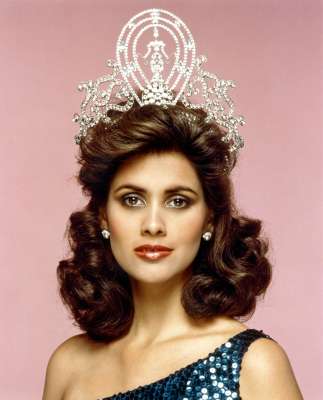 Miss Spain Was Crowd Favorite
The 1985 pageant was held in Miami, Florida for the second consecutive year. The opening number was not as elaborate a production as the 1984 spectacle in which ethnic folk dancers representing Mexico, Spain, Scotland, Cuba, Panama, Ukraine, Africa and the Caribbean danced along with the contestants as they stepped off a luxury yacht docked by the theater. This year's pageant seemed aesthetically drab to me. But it was a progressive year in that a Mexican-born woman represented the USA and a black African [Zaire] was named as a finalist for the very first time in Miss Universe history.


The interviews: Miss Ireland became a model because she could not find a job as a teacher, Miss Uruguay taught aerobics to "old" people aged 30-50, Miss Chile opined that the neutering of animals was a "shame", Miss Canada liked tall men, and Miss Brazil told us she wanted to keep some of the prize money for herself. Miss Puerto Rico recounted all the natural disasters impacting her local pageants, Miss Zaire did not seem to understand the most basic questions, Miss USA told us about the extra $55,000 in cash and prizes she won in Texas, Miss Spain exalted the modeling profession, and Miss Venezuela talked about her grandparents who were retired in Arkansas!

For the swimsuit segment, the Top Ten emerged from an oyster shell "under the water." I thought the 'floating bubbles' effect was indeed effective. The Miami Little Sisters serenaded the semi-finalists during the evening gown competition. The final question was "What do today's young women want to tell the world?" None of the women answered the question directly. Miss Venezuela's response was that all youth should work hard to get ahead, Miss Uruguay gave her love to everyone, Miss Zaire thanked her friends for their support, Miss Puerto Rico advised everyone to be "faithful" and "keep on working," and Miss Spain expressed her urgency in wishing peace to all troubled nations.

The first runner-up Miss Spain Teresa Sanchez of Sevilla was the crowd favorite. As in the case of Miss Italy who also finished second [in 1987], Teresa has been highly acclaimed by countless fans and critics as being the true winner cheated of a Universal title. Interestingly enough, Teresa's pedigree was not at all as impressive as Roberta's. Miss Italy in the 1987 contest was the flesh-and-bones daughter of Miss Italy 1959. Teresa was not even officially Miss Spain, but first runner-up to Miss Spain as well!! A stroke of luck allowed Teresa to participate in the 1985 Miss Universe pageant when the real Spanish queen could not fulfill her ambassadorial responsibilities. An identical situation "would crop up" in 1999 when 'Miss Spain' finished in third place. As for Teresa, I concede that she was a very lovely contender (and pretender?) to the Universal throne, but not as confident nor as intelligent as other semi-finalists in her cohort including the eventual winner, Deborah Carthy-Deu of Puerto Rico.

The 10 Semi-finalists
by Juan Prado
Miss Universe 1985 in Wikipedia
Photo courtesy of the Miss Universe Organization
at 4:00 AM