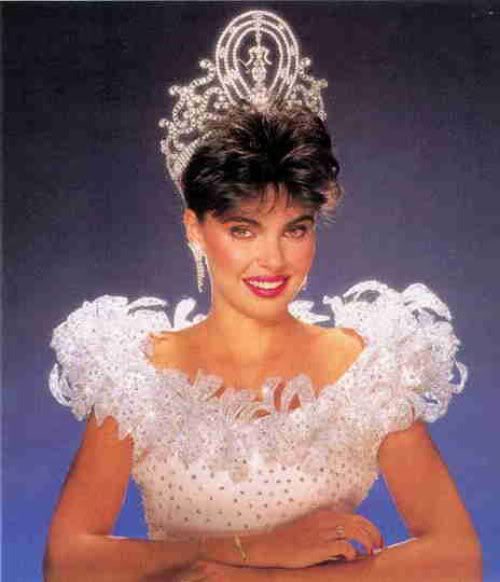 THE "NAVEL" of the Universe - where the Atlantic and Pacific meet - was the gathering place for the 1986 Miss Universe contestants. Panama has given the world the only first runner-up to become Miss Universe. In the mid-1980s, this Central American nation hosted the delegates from North, South, East, and West. The Parade of Nations featured envoys from Luxembourg, Cote d'Ivoire, Sri Lanka, and Belize. Gloria Estefan and the Miami Sound Machine were introduced as the musical guests. The theme for the opening number was a marriage between yesterday and tomorrow. Against a background in which Panama's tallest skyscraper soared into the heavens, the Ballet Folkl?rico de Panam? overwhelmed the stage with flowing white skirts and straw hats.

The TV audience is treated to a Catalina fashion swimsuit segment in which all of the seventy-plus delegates are showcased modeling their own exclusively-designed suits amidst the natural splendor of Panama's beaches. The law of averages taught viewers to predict the Top Ten by observing which contestants received the highest preliminary swimsuit scores displayed on the screen. The ten semi-finalists hailed from Africa, Europe, and the Americas. There was no Asian, Middle Eastern, or South Pacific presence in the Top Ten this year--making it difficult to experience this as a truly global event. It did not help matters to notice the gigantic bronze "medallion" on which only the North and South American continents [the Western Hemisphere] were etched.

Miss Brazil charmed the audience by confessing [in Portuguese] she drove a car without a driving permit, Miss Colombia expressed her love of travel, Miss Puerto Rico talked about the car she won as Miss Puerto Rico being stolen, Miss USA admitted to having a superstitious grandmother who gambled, and Miss Zaire shocked Bob Barker by telling him she had about a dozen brothers and sisters!! Miss Switzerland gave up her 'computer operator' job to become Miss Switzerland, Miss Venezuela formulated an advertising campaign to promote Panama as a tourist destination ["Mi Nombre es Panama"], Miss Poland challenged Bob on how he knew she was planning to visit Chicago, Miss Finland surprised Bob with listing 'pizza' as one of the things she missed most about Finland, and Miss Chile demonstrated how laborious Bob's job could be if the contestant seemed totally 'out of it.'

The swimsuit competition followed in which the Top Ten modeled sapphire-blue Catalina swimsuits to the elevator music version of Sade's "Sweetest Taboo." The musical number featuring all the delegates was a jungle fantasy in which every Miss was a jungle animal ruled by an evil queen (in the person of the reigning Miss Universe Deborah Carthy-Deu) who seduces and entraps a lone safari explorer. The evil queen, the explorer, and all the 'animals' conclude this number by sipping 'champagne' and dancing the night away! The evening gown segment highlighted the adorable Little Sisters singing their corny and cheesy "You Are My Universe" medley for the very last time (thank goodness).

For Deborah's final walk, all the contestants surround a throne set on a high dais at center stage. Deborah sits on the throne moments before her successor is announced. A raven-haired South American beauty from Venezuela, Barbara Palacios Teyde, is led to the High Throne on the arm of Bob Barker.