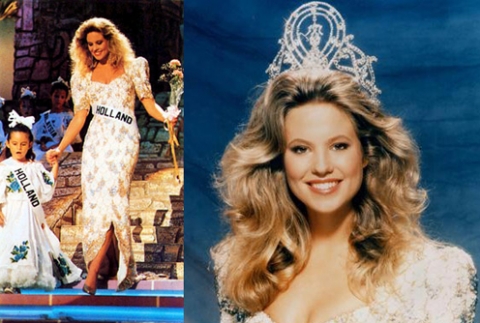 Holland Takes It All

THIS is the second time that the pageant was held in Mexico. In 1978, the pageant was held in the Mexican resort city of Acapulco. This year's pageant took place in beautiful Cancun off the coast of the Pacific Ocean. This is also the first year that a representative from St. Vincent & the Grenadines participated. Actor John Forsythe, actress Emma Samms and former Miss Universe from Canada, Karen Baldwin, hosted the pageant. Despite lavish stage production, camera direction proved to be abysmal.

The jury comprised mainly of American judges, and they had clearly in mind who the winner would be - Miss Holland (Angela Visser) who ranked first in all three categories. Fluent in several languages, Angela dazzled the judges and the audience with her eloquence, poise, personality, beauty and intelligence - the things true beauty queens are made of. Holland has had a poor performance in the pageant since 1965 when Anja Schnuit was selected as fourth runner-up. Angela's victory was remarkably significant since it was the first time that Holland ever won the title!

- Karen Baldwin's questions during the semi-finals interview appeared serious and provocative. The average duration of each interview was about 3 and 1/2 minutes, which gave each semi-finalist ample time to think and respond. Karen's style did not feel rushed, as compared to previous and current male hosts.

- Miss Chile's frequent reference to the great Chilean poet, Gabriela Mistral proved to be refreshing. It was impressive how she quoted a poem by Mistral about children! When was the last time a semi-finalist actually read great works of literature?

- Miss Sweden and Miss Finland were roommates and both made the semi-finals. - Miss Holland's puzzled look as she tried to understand the word "upbringing". Finally she was able to seize its meaning and gave an excellent answer.

- The appearance of 1953 Miss Universe from France, Christiane Martel De Alem?n who now lives in Mexico. There's little hint of elegance in the show until Christiane appears to receive an award and looking lovely as ever.

Downers
- Despite its lavish stage production, stage direction proved to be abysmal. The Parade of Nations was disappointing. The contestants only announced the countries they were representing, while gyrating to the Caribbean rhythm of the pop song "Hot, Hot, Hot".

- Camera direction was equally unsatisfactory. Individual shots of the contestants during the Parade of Nations were too abrupt, thus making it nearly impossible for the television viewer to appreciate the candidates.

- John Forsythe should have been coached as how to properly use the microphone; there had been one or two moments when the viewers could hardly hear what he was saying because he was not speaking directly to the microphone (Emma Samms noticed this gaffe!).

- During the swimsuit competition, each contestant was given the opportunity to say something about herself; sometimes one could hardly understand what a contestant was saying due to poor audio reception, or simply due to incomprehensible English of the candidate or of the interpreter whose voice sometimes drowned out the candidate's own voice.

- Emma Samms had barely finished her spiel when Karen Baldwin cut her off by introducing Miss Germany (Andrea Stelzer)as the first candidate to be interviewed during the semi-finals.

- Miss Poland (Joanna Gapinska) and her struggle with communicating in English. - And lastly, one could never forget how Forsythe had missed introducing one of the judges, Phil Richards, in sequential order! Notice Richards's look of disbelief when his name was skipped off! After having introduced all the judges, a stage hand (and this was blatantly shown in front of the camera) signaled Forsythe that he had failed to mention Richards. Eventually, Forsythe introduced Richards amidst a chaotic panning of the camera.