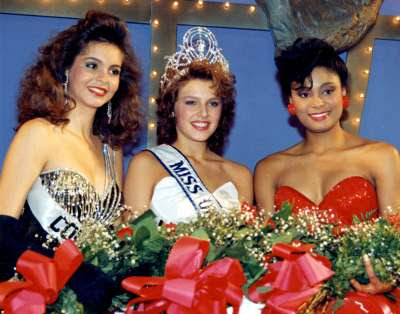 The Belle From Hell (Norway)

30th Anniversary Event on TV
1990 was the 30th anniversary of the Miss Universe telecast on CBS. Hollywood, as the capital of unreserved glamor and material excess, was touted as the most appropriate host city for this milestone year in the pageant's history at the beginning of the prosperous 1990s. There were numerous cosmetic changes to the face of the Miss Universe broadcast.

During the Parade of Nations, we see a close-up of each delegate in both swimsuit and evening gown along with all three preliminary competition scores including the all-decisive interview category. The number of semi-finalists was still ten, but six finalists would be chosen to field a round of judges' questions. I never cared for this segment because it consisted of boiler-plate questions and boiler-plate responses. A severe cut would be made to the Top Three who would participate in the ritual of the final question, and the sound-proof isolation booth would now only accommodate two finalists instead of four.

For the better, the semi-final interview format remained unscathed. Miss India spoke elegantly about the differences between American and Indian women, Miss Colombia asserted Colombia's role in the drug cartel situation, Miss Mexico reveled in her jump-into-the-bullring episode, Miss Turkey pointed out challenges faced by Turkish youth, and Miss Chile defended the ethics and prestige of the accounting profession. Miss Bolivia envisioned changing her country's educational system, Miss Czechoslovakia [see Critical Note**] expressed her high hopes in light of the dramatic political and economic changes in Eastern Europe, Miss Venezuela preached about protecting the environment, Miss USA's interview centered on her being a good role model, and Miss Norway projected her future as a nurse helping sick children in Africa.

For the swimsuit competition, the semi-finalists' vital statistics [age, height, weight, etc.] were listed for the last time ever. The Little Sisters were an expected feature of the evening gown event by now. The first Top Three in Universal history: USA, Norway, and Colombia. The final question was: "If you were a judge tonight, for whom would you vote as the new Miss Universe?" Miss USA would vote for her roommate Miss Trinidad/Tobago for being a great friend, Miss Norway would vote for Miss Iceland for cheering everybody up when they were 'down,' and Miss Colombia would not vote but agree with the real judges' decision and be happy for the winner.

Miss Colombia Lizeth Mahecha and Miss USA Carol Gist came in third and second place, respectively. Miss Norway, Mona Grudt, was crowned the first Miss Universe of the 1990s and was the last winner to take the victory walk during the reading of the Miss Universe creed.

Photo courtesy of the Miss Universe Organization
at 5:46 PM