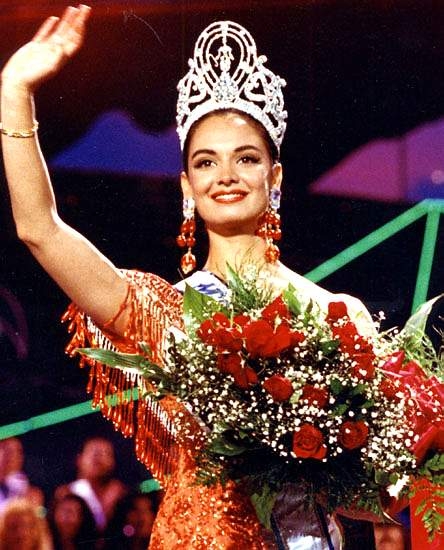 
THE 1991 PRODUCTION struck me as very smooth, sleek, and modern. The seventy-or-so delegates file into the Aladdin Theater in Las Vegas to this year's theme song, "One World, One Universe." The Parade of Nations was effectively presented by continental design for the third consecutive year as opposed to the alphabetical order used for decades. I was overwhelmed by the Andean beauty of Miss Chile in her fantasy costume of white feathers. A platinum blonde Miss Curacao, wearing a violet-blue costume depicting the sea, took her place among the South American delegates. It took quite a while after the early 1990's for the pageant to do away with the annoying "Islands" classification and recognize the Caribbean and South Pacific contestants as such. Just in time to revert to the old alphabetical order in 1998!! Anyway, in 1991, Eastern bloc nations participating for the first time were honored with a special mention: Miss Romania and Miss Bulgaria. Miss USSR, grouped with the Asian candidates, symbolized the Russian core of the collapsing Soviet empire. The national costume presentation featured at least two contestants from sub-Saharan Africa: Miss Nigeria (a regular participant since 1987) and Miss Ghana in her copper-colored tribal robes and turban representing her "Land of Gold." An overly-enthusiastic Miss Mexico, encouraged by the theater's noisiest cheering section, introduced herself in a traditional Mexican "charro" outfit in various shades of green!!!

The two color commentators were Leeza Gibbons and Angela Visser, and this was the second year in which the TV audience is treated to juicy backstage "dish." The delegates assemble on stage wearing their 'lipstick' red Catalina swimsuits with matching wrap-around 'skirts.' Dick Clark, in his second year as emcee, announces the Top Ten: Jamaica, France, Yugoslavia, Paraguay, Curacao, USSR, Venezuela, Netherlands, USA, and Mexico. The swimsuit competition quickly follows with voice-overs by the semi-finalists. We find out Miss France is the third woman in her family to represent France in an international beauty pageant, Miss USSR's impression of the USA is that it is full of "beautiful" men, Miss Netherlands' odd jobs included working at a gas station, and Miss Mexico confessed to growing up as a tomboy.

Dick Clark proved to be an extremely polite interviewer. Bob Barker would bring out the "sassy" in some girls, but Dick Clark was too diplomatic to prompt the contestants in that manner. Miss Jamaica talked about making her own toys as a child, Miss France recalled an episode in which she walked on hot coals in Tahiti, Miss Yugoslavia commended her grandmother for raising her children during the German occupation of World War II, Miss Paraguay admitted to being a painfully shy youngster, and Miss Curacao educates everyone about her island's Dutch cultural influence. The second half of the 'interviews' really spices up. Miss USSR reveals she was initially terrified of being interviewed, Miss Venezuela tries a little English, Miss Netherlands mentions Madonna's bra(!) as a prototype for her future fashion line, Miss USA is amazed by her fellow contestants who think all American cities are as 'glitzy' as Las Vegas, and Miss Mexico acknowledges all her brothers in the audience roaring themselves hoarse for her.

The evening gown segment was a 'dreamy' affair. Against a backdrop of "dancing" waters twirling under a twinkling star-studded midnight blue 'sky,' the Miss Universe Little Sisters present roses to the Top Ten as they descend two staircases draped by floating veils. The six finalists are announced and go through a round of judges' questions. The Top Three are then chosen for the final question. Miss USSR (the crowd favorite) remains with Dick Clark as Miss Netherlands and Miss Mexico are sequestered in the isolation booth. The final question is "What is your country's biggest problem and what do you think should be done about it?" Miss USSR's response is that problems in her country are now over since everything is "free" and she cites her presence at the Miss Universe pageant as an example of the changes in the Soviet Union. Miss Netherlands turns the question around and asserts that the Netherlands is a leader in protecting the environment (she used the term 'nature'), but that other countries are not cooperating in this effort. Miss Mexico's answer started to sound somewhat business-like as she posed NAFTA [North American Free Trade Agreement] as Mexico's biggest challenge, but she ended up "waxing poetic" as she expressed her pride in the perseverance of the Mexican people.

The judges cast their final vote and selected Miss USSR Yulia Lemigova and Miss Netherlands Pauline Huizinga as the second and first runners-up, respectively. Lupita Jones of Mexico is crowned her country's first (and to date, only) Miss Universe. In true Las Vegas style, the new Miss Universe ascends the purple velvet-cushioned throne without the benefit of the Miss Universe creed which is quietly dropped in this fortieth edition of the pageant.