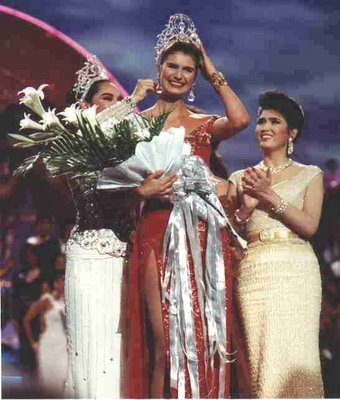 Beauties galore in the Elephant Kingdom
The magical kingdom of Thailand welcomed seventy-eight delegates to the capital city of Bangkok for the 1992 contest. The entry into the Queen Sirikit Convention Center was a magnificent display of pomp and splendor. All of the beauty queens attired in their national costumes file behind the reigning Miss Universe (Mexico's Lupita Jones) astride a mighty pachyderm [elephant] adorned in a gold and silver carapace. Lupita - bedecked with her banner and crown as well as calm, cool, and collected under her elegant parasol - winks at the world-wide television audience as the announcer blares out his signature call, "LIVE from Bangkok!"
The welcoming song was "Sawadee" which means hello in Thai. An ironic twist to this tune was that we learned to say "bongiorno in Italy" in spite of the fact that there was no Miss Italy in the pageant that year! But the Parade of Nations featured some of the most elegant ensembles. Miss France was a medieval queen in golden robes and her face was wrapped in a majestic wimple. Miss Poland braved the humidity in a synthetic (?) full-length fur cloak and a Russian-style fur cap! Miss Mexico represented a "china poblana" in a full-skirted black velvet dress embroidered with large, colorful flowers. Upon her introduction, Miss Panama extended the white folds of her traditional "pollera." Miss Korea wowed the world, though, by displaying an impressive mandarin-orange tiger with bold, black stripes clawing at her pink and baby-blue bell-shaped Korean costume.
Dick Clark announced the Top Ten who proceeded to participate in the Catalina swimsuit competition. It is no surprise that my favorite competition segments take place in Asian settings. In Taipei 1988, it was evening gowns but Bangkok 1992 showcased the most memorable swimsuits. By the early 1990s, the Catalina swimsuit giving birth to the Miss Universe pageant in 1952 had evolved to emphasize a contestant's tall, slim figure by riding high on the thighs accentuating the legs as slender columns and the hips as voluptuous curves. The bust for whatever reason was somehow neglected by the classic one-panel suit quietly replaced by the bust-enhancing standard tank-ini of today.
But the 1992 semi-finalists modeled the classy Catalina's in a candy-pink color and if you observed closely the seams were candy-striped in magenta and carnation pink. The suit's color seemed to be especially selected for the blondes (Australia, Sweden, New Zealand, USA, Belgium, and the Netherlands). Miss Colombia had to rely on her unassuming sweetness, Miss Namibia on her statuesque sophistication, Miss India on her determined athleticism, and Miss Venezuela on her smug confidence to do well against the flaxen, fair-haired girls. All ten semi-finalists strutted across a drum bridge and posed beside an over-sized parasol (with tassels) held steady by a hunky Thai beach - boy to receive their swimsuit scores.
The on-stage interviews this year with Dick Clark stood out for their serene pleasantness. Miss Australia related her previous travels to Thailand and spoke a little Thai, Miss Sweden advocated world travel to know the rich and the poor, Miss India (a runner) joked about the disciplinary excesses of her father-coach, Miss Netherlands reassured Dick that she was ready to ?hit the road? on her motorcycle, and Miss New Zealand amazed everyone with accounts of her risky, death-defying physical stunts. Miss USA announced her plan to become a child defense attorney, Miss Colombia upheld her pride in her family and her country, Miss Namibia presented a concise (yet enjoyable) lesson on Namibian geography, Miss Venezuela lectured on environmental architecture, and Miss Belgium aspired to become a lawyer-actress (there's one of these in every bunch).
After the evening gown competition in which the semi-finalists were serenaded by the Little Sisters of Bangkok sitting around a Buddhist temple, the six finalists were chosen to field a round of judges' questions. The severe cut to the Top Three (for the suspenseful final question) was made to include a contestant from Africa, Asia, and the Americas and all three happened to be wearing red evening gowns. The final question was, "If you became leader of your country tomorrow, what would be the first thing you would do?"  Miss Namibia promised to champion the children of her new nation, Miss Colombia promoted a peace-making plan for her troubled country, and Miss India gave a purely whimsical response, "I would build the biggest track and field ground in India because I think we are lacking that!"
The judges submitted their final ranking while each Top Three contender stood on a pedestal listening to a gong and mysterious music playing in the background. Then all of the delegates gathered around Lupita Jones' throne as Dick Clark proclaimed Miss India Madhu Sapre the second runner-up, Miss Colombia Paola Turbay the first runner-up, and Miss Namibia Michelle McLean the new Miss Universe. Lupita crowned her successor and the two former Miss Universe winners from Thailand placed the banner and presented the winner's bouquet of native flowers.