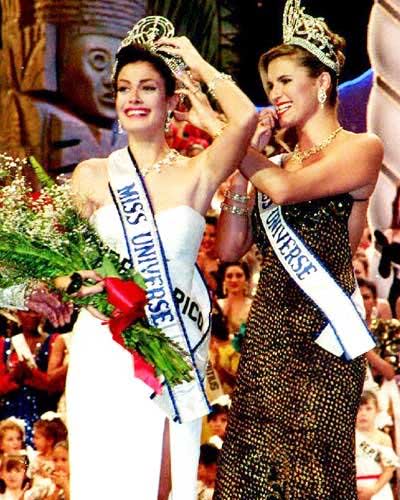 THE SCORING during the 1993 Miss Universe pageant in Mexico City has predominantly been fair. Despite the presence of four American judges, neither of them rooted for Miss USA (Kenya Moore).

Three of four American judges - Dennis, Daniels and Dorn - favored Miss Venezuela (Milka Chulinas) by giving her an average score of 9.83. On the other hand, Kitt favored Miss Brazil (Leila Schuster) with an average score of 9.76. Judge Van Blaricom afforded the highest scores to Miss Czech Republic even though she struggled with her responses in English and German. Nevertheless, fashion designer Dennis favored the tall and fashionably slender Czech beauty.

The presence of two Mexican judges (writer Cuevas and Miss Universe 1991 Lupita Jones) did not do much justice for Miss Mexico who failed to make the semi-finals, much to the dismay of the Mexican audience. Interestingly enough, Jones's least favorite contestant was Miss Finland (Tanya Smurna) who was the only one who received scores in the 8s. However, Miss Finland found great favor in jazz artist Matsui who gave her an average score of 9.86. Generally speaking, the Japanese love Nordic beauty; it is no surprise that the Japanese-sponsored Miss International pageant is replete with winners and finalists from Iceland or Finland.

Just to show the human side of unpredictability and subjectiveness, Alonso, who is Venezuelan and a former Miss World contender, gave a mediocre score (8.1) to Miss Spain (Eugenia Santana) in the interview category. Miss Spain, who had been elected earlier as Miss Photogenic by the press, gave an outstanding interview. If Alonso was not impressed by Miss Spain, judge Kitt certainly was! He gave the Spanish beauty a 9.7! Miss Brazil, Miss Finland, and Miss Puerto Rico (Dayanara Torres) were also victims of Alonso's harsh judgment, especially in the swimsuit category. Eventually, Alonso gave the highest marks (9.9) to Miss Colombia (Paula Bettancourt) in all three categories. Apparently, she found Miss Venezuela's response - that she wishes to be a diplomat so she could help unite the world amidst its diversity - a little too banal compared to Paula's seemingly simple yet sincere response.

When Miss Colombia was asked by host Dick Clark how she would describe her country, Paula responded with a certain bravura that one could detect a marvelous sigh in her speech. Her love for her country was even highlighted during the final question when she proudly proclaimed Colombia as the most beautiful country in the world. Paula was my best contender for the title simply because she had the true marks of a beauty queen: poise, personality and elegance. Her sultry looks remind me of a young Kim Novak. Paula knew how to attract attention. She easily won the evening gown competition by wearing a sexy, tight gown which revealed a narrow waist, and six-inch heels. I was terribly disappointed when she did not win; Colombia hadn't won the title since 1958, and I was looking forward for the Colombian government to make Paula tax-exempt for life and to build her a mansion on a hill!

How The Judges Scored


Uppers
- This is the third time that the pageant was held in Mexico (the first in Acapulco in 1978 and then in Cancun in 1989). This year's production was more lavished and far better than the previous ones.

- Dick Clark did a remarkable job as a host.

- The array of evening gowns that the semi-finalists wore was superb. I especially liked the gowns worn by Miss Colombia, Miss Puerto Rico and Miss Brazil.


Downers
- During the opening of the show when the contestants sashayed their way onto the stage, one would notice that Miss Brazil's hair was down; during the actual Parade of Nations, Miss Brazil's hair was up. It is very likely that the Parade of Nations segment had been taped earlier, because the taped segment gave the contestants enough time to change to identical outfits for the selection of the ten semi-finalists. This blooper would be replicated in the pageant of 1994, when one could see missing headresses during the initial segment when the contestants were approaching the stage.

- After responding to her finalist question, Miss Venezuela Milka Chulinas was dismissed too early by host Dick Clark who was supposed to ask each contestant to remain with him for a few seconds before returning to their spot.

Photo courtesy of the Miss Universe Organization
at 5:10 PM