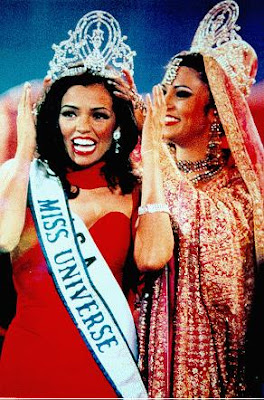 USA wins sixth crown
India places second
THIS YEAR'S pageant was particularly exciting because it was the first time that the pageant was held in Africa. Out of 10 judges, 6 were Americans - which might explain the fact that Miss USA won or at least made the top three! Judge Magnuson gave the highest scores to Miss South Africa (Augustine Masalela) with an average of 9.63; the lowest score she could give any candidate was Miss Colombia (Tatiana Castro) with a 9.26. Miss Colombia received the lowest scores in the interview category from most judges; this, of course, did not have anything to do with the way she responded to Bob Goen's questions (which she did in a very poise and almost sensual manner) as much as it had to do with the questions Goen asked (i.e. who wants to know about a candidate's dog in a beauty pageant???!!!).
The most predictable judge was Russian pop artist Natasha Alexandrovna who gave a 9.99 to every candidate in at least one category. Entertainment writer Gallo gave 9's to all candidates except to Miss Venezuela (Denyse Floreano) who did, however, become the top candidate of compatriot Irene Saez. South African judge Mokae only gave a 9.0 to Miss South Africa in the interview category; I found Augustine - who is a TV hostess in her country - quite articulate and intelligent in her responses. Miss Canada's interview scores were unfairly spoiled by Judge Taylor who gave the candidate a 7.0! Was this an intentional score, or did Taylor accidentally press 7 on his computer instead of a 9 something?

- It was very exciting to see women from developing nations dominating the semi-finals.


- The Namibian production was fabulous, from choreography to stage setting, from the intro just before the Parade of Nations to the little segment featuring a Namibian boy in search of the treasure (the Miss Universe crown).

- Miss India's "hypnotic" response to the question,"What would you do if you were a victim of discrimination? - to which she replied by quoting a wise proverb.

- Miss U.S.A. Chelsi Smith's victory is a victory for all people of biracial/bicultural background. Even though she was not my favorite to win, she proved herself to be intelligent, charming and dynamic.

- During the semi-finalists' interview, host Bob Goen had sometimes the tendency to rush questions, which was evident when he interviewed Miss India (Manpreet Brar). Manpreet, who was cool as a cucumber, barely finished her response when Goen interrupted her.

- During the second half of the show, co-host Daisy Fuentes wore a tight, low-cut gown exposing her cleavage. Compare her outfit with that of 1994 Miss Universe Sushmita Sen who looked so elegant in her simple white dress and sparkling jewelry. As much as Daisy is likeable to many people, she behaved in an almost "homegirl" manner by calling Sushmita "girlfriend" and dressing up in an unbecoming attire.

- Also, I was a bit upset that Miss Colombia (Tatiana Castro) and Miss Dominican Republic (Candida Laura) did not place in the finals. Both were equally striking beauties.


Photo courtesy of the Miss Universe Organization
at 6:48 PM