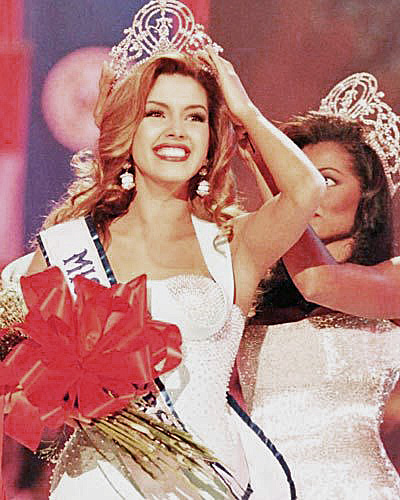 Venezuela wins fourth crown
Aruba places second
THERE WERE FIVE American judges in this year's pageant (one of which is of Hispanic descent - Emilio Estefan, husband of ex-Miami Sound Machine vocalist Gloria Estefan). Nantz, Lynn and Estefan, in addition to Bolocco (Miss Universe 1987 from Chile) , - all selected Alicia Machado, Miss Venezuela, as their top candidate. However, of these four judges, Estefan gave the lowest average score (9.26) to Miss Venezuela. As a matter of fact, Estefan proved to be the lowest scorer of all the judges (the highest score he could give any candidate was a 9.3 to Miss Venezuela in the evening gown category).
The predominance of American judges might have helped to give Miss USA (Ali Landry) the second highest average points (9.71) to Miss Venezuela's 9.83. Maud Adams, a Swedish actress and a former James Bond girl, gave the second highest scores to Miss Sweden (Annicka Duchmark), whereas African-American entertainer Starletta Dupois gave a 9.95 both to dark beauties Miss Aruba (Taryn Mansell) and Miss Finland (Lola Odusoga), despite the latter's mediocre performance during the interview. Again, a judge does not always favor a candidate of the same nationality/race as he or she is. Bolocco, for instance, was more impressed by Miss Venezuela than she was by Miss Chile who did not even make the semi-finals. And Elizabeth Sung, a Hong Kong-born actress now working in the U.S., gave the highest score to Miss USA than to Miss India (Sandya Chib) - the only Asian candidate among the semi-finalists.
Leave it to fashion designer Chappell to give a 9.9 to Miss Mexico (Vanessa Guzmán) in the evening gown competition; it was clear that Vanessa wore the most elegant gown, topped with a chic coiffe and a radiant look. Miss Finland (Lola Odusoga) looked equally stunning in her white and black silk gown, but she committed the error of relying on her mediocre English to respond to Nantz's interview question as well as the final question, unlike Miss Venezuela or most Latina contestants who wisely relied on a interpreter.

- The initiation of the selection of the first Miss Photogenic winner through the Internet, as this system allowed the public not only to participate interactively, but it also allowed the world to discover the Miss Universe website and its many wonderful links!!!

Downers
- The Spanish interpreter (from De La Vega Translation Services) who translated for Miss Venezuela (Alicia Machado) during the first interview did not quite accurately translate the contestant's response. When asked the question, "What do you think man can learn from women?", Alicia responded by saying, "Yo considero que much?simas cosas. Porque gracias a nosotras, est?n aqu?, y est?n en este momento en este teatro aplaudi?ndome a mi que soy una mujer, y me aplauden porque estoy en un concurso de belleza." (Literal translation: "I think many things. Because thanks to us women, these men are here, in this moment in this theater applauding me because I am a woman, and because I am in this beauty pageant.") The translator translated the last phrase by saying, "...the men are in this beautiful theater, seeing this beautiful contest, and applauding me because I'm a beautiful woman!" The translator's inaccuracy might have inspired the judges to favor Alicia even more.

Photo courtesy of the Miss Universe Organization
at 6:26 PM