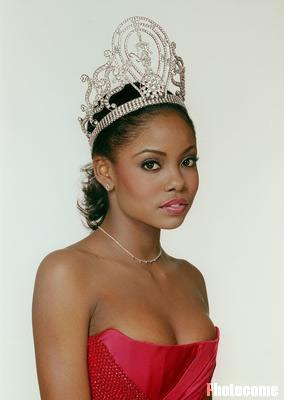 LACKLUSTER is the word that best describes this year's pageant in terms of production. Overall, the whole presentation lacked its most important quality - its international touch. The Miss Universe show has gone American, capitalistic, and plain dowdy. From the moronic comments coming from the two beautiful - but nevertheless historically challenged co-hostesses (Ali Landy and Julie Moran) who unsuccessfully attempted to enhance their job by injecting pseudo-cutesy comments on breasts and gowns (neither really should have been invited to host) - to the insipid lack of audio-visual esthetics (usually provided by the candidates wearing their colorful national costumes and introducing themselves). This year's candidates have been reduced to plain mute beauties who only gained their speech if they were selected as semi-finalists. The "Parade of Nations" was merely a copycat of the "Parade of States" in the Miss USA pageant in March; it goes without saying that the crew who organized and staged the Miss USA pageant was the same crew who had annoyingly imposed their too American, and alas, cheap vision, on the Miss Universe show.(See more of my negative criticisms below in the "Downers" section.
This year's jury was hardly international. Actor Richard Chamberlain, although British by birth, has been a long-time resident of Hawaii. Alonso, who was a judge during the 1993 pageant in Mexico City, has lived in the United States for many years as well. There was no true European judge. Despite its large Asian-Pacific population in Hawaii, none of the Asian candidates, except Miss India (Lymaraina D'Souza), was even placed among the semi-finalists.
Of the eight judges, three showed strong preference for their favorite candidate. Chamberlain gave elegant Miss Trinidad & Tobago (Wendy Fitzwilliam) an average score of 9.95, Adams gave the blonde - the only one for that matter - Miss Russia (Anna Malova) an average score of 9.99, and Tam gave Fitzwilliam an average score of 9.89. Alonso seemed to have favored strongly the Latin candidates by giving them scores in the 9.90s. The lowest score that Alonso could give was an 8.90 to Miss Ireland (Andrea Roche) in the interview competition. Since all the others were wearing off-white, white or pastel gowns, Miss Ireland dazzled the audience with an exquisite black gown with a lace design.
The biggest injustice in scoring of all time during a Miss Universe competition was committed by judge Farley who gave Miss South Africa (Kerishnie Naiker) a 2.00 in the interview! Why even bother voting? Had Farley abstained from voting, Kerishnie would have probably overpassed Miss India (Lymaraina D'Souza). When asked by host Jack Wagner about what she learned from her Maltese co-candidate, Kerishnie gave a very structured and eloquent response.
The Judges
How The Judges Voted

- I liked the idea of pairing together two candidates so they could ask each other about their respective cultures. This element should be included in future pageants since it involves full concentration, communication and interaction. Remember that the contestants represent their countries, and as such they serve as ambassadors of goodwill. Even if a candidate is not placed among the semi-finalists, at least her country is being promoted to millions of viewers by a semi-finalist!
- When asked the question, "If Portuguese is your native language, how did you communicate with Miss Cyprus?", Miss Brazil (Michella Marchia) wittily responded: "English is my second language." (applause from the audience) - Miss Venezuela (Veruska Ramirez), proved to be a far more likable candidate than last year's Marena Bencomo, who seemed less bubbly and lacked personality. Clearly, Veruska was the most radiant candidate from Latin America.


- As I had mentioned earlier, the whole production was too American, or should I say, pathetically homogenous.
- Unlike its predecessors, this year's show was too fast-paced and too modernized; the "Parade of Nations" consisted merely of zooming in on a candidate for less than three seconds, and while this was going on, a big screen on the background showed an magnified headshot of the candidate - which was extremely annoying and distracting.
- Equally distracting and visually tiring was the presentation of the candidates wearing their national costumes. The segment had been recorded earlier and was choreographed in a manner which allowed the contestants to do some voguing and even flirting with the viewer. Nothing wrong about flirtatious posing. What lacked was the harmony and dignity factor: the contestants should have been assembled on stage to be appreciated by the viewing public while displaying their full national regalia with pride.
- Future hosts and co-hosts should take a crash course on the history of the Miss Universe pageant. Julie Moran's gaffe - "Trinidad and Tobago has never won the Miss Universe pageant"- will now go down in pageant history as the most absurd statement ever made.
- Lack of mention of Hawaiian art, culture or diversity. Surely, everybody could see hula dancers and Hawaiian warriors on stage, but was there ever an instructional tour given at all about the host state? In the past pageants, the current winner would usually promote the host site by showing points of interest or by merely speaking a little about that site's history. Sadly, no culture or history was present this year; just picture perfect postcard settings of Hawaii.
- The pageant organizers, or whoever is responsible for selecting the jury, should make every attempt to invite a non-celebrity as a judge. As suggested by a pageant fan, too much money is spent paying off "famous" people if a big chunk of that money can be saved by hiring a professional pageant fan for less.
- Although the stage setting was quite attractive, stage direction left something less to be desired. Pandemonium broke when Miss Ghana lunged on Miss Trinidad & Tobago as soon as the latter was announced as the winner.