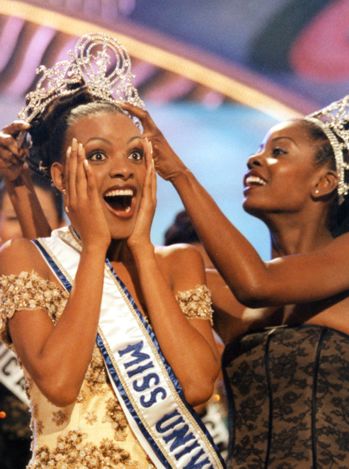 THIS YEAR'S production proved to be far superior to last year's. From the lush opening in which Wendy Fitzwilliam, dressed in her now famous costume with six-foot long plumes - coyly teases the audience ("Who will wear my crown?") to the simple coronation of a 19 year-old student from Botswana, the show's producers knew what it takes to give a good show. Last year's venue, Hawaii, with its high-rise hotels and sandy white beaches, proved less exciting than Trinidad and Tobago with its ferocious beating of steel drums and colorful carnivals. The Hawaiian production favored a fast-pace approach, which sometimes resulted in visual malaise. The Trini production, even though slightly fast-pace, at least offered wonderfully vivid images - thanks largely to the resurrection of the national costume presentation which was atrociously abolished last year. However, the candidates still remained mute and never had the chance to greet the world in their own voices - a flaw that added to the impersonality of the pageant.
This year's jury members may have come from different backgrounds, but the jury itself was hardly international. All of them either live in and work in the U.S. And just because two judges may come from the same background may not always necessarily mean that they share the same perception of beauty. Let's compare Knauss and Seymour, both of whom are models. Knauss gave an average score of 9.87 to Miss Venezuela (Carolina Indriago) whereas Seymour gave a score of 8.03. Likewise, Seymour gave Miss Puerto Rico (Brenda Liz Lopez) an average score of 8.36 compared to a 9.40 by Knauss. Do athletes think alike? Well, not quite. Bruce Smith liked Miss Mexico (Silvia Salgado) (9.36) better than Holyfield did (8.66). Even a bright Miss Ghana (Akuba Cudjoe) was more favorable to Holyfield (9.94) than to B. Smith (8.87).
Uppers
- I continue to like the idea of pairing together two candidates so they could ask each other about their respective cultures. This element, or a similar one, should remain in future pageants since it allows the candidates to reveal their personality and spontaneity.
- There were a few surprises, such as Miss Jamaica (Nicole Haughton) and Miss Ghana (Akuba Cudjoe) - both candidates proved themselves strong and fascinating. Miss Ghana redefined the notion of beauty - voluptuous exoticism and poised articulateness. Expect to see more of her type of beauty in future competitions.
- When asked by host Jack Wagner this question, "You're the first Miss Venezuela of color and you say that some people weren't happy about that. How did you get them to look past your color?" - Carolina Indriago responded - "I've always thought that beauty is internal and not external. So what I try to do is to be who I am, Carolina Indriago in the way that I speak to people, in being warm-hearted with them, and that's the way that I do it." Way to go, Carolina!
- The favorite of the evening was Miss Philippines (Miriam Quiambao). During the preliminary evening gown competition, Miriam fell on stage but quickly and graciously recovered, thus gaining the audience's admiration and making herself a symbol of feminine power. Also the recipient of the Best Style Award, Miriam nearly captured the third crown for her country.
Downers
- What's with the dropping of "Miss" in front of the name of the country? It seems so impersonal, tacky and irreverent. The candidates are beautiful living creatures, not mere geographical locations. We might as well call the pageant, "Universe Pageant".
- Julie Moran, who made the terrible gaffe last year by saying that Trinidad & Tobago has never won the crown, has been guilty again of historical inaccuracy when she remarked that "it is the first time in like 15 years that the U.S. has not been in the semi-finals", which is, of course, not true (Barbara Petersen failed to crack the semi-finals in 1976).
- The absence of Janelle Commissiong, Miss Universe 1977 from Trinidad and Tobago, and of former titleholders. How easily forgetful could the organizers be?
- The absence of the isolation booth during the final question segment. The very idea of replacing the booth with a stereophonic headset is absurd. Not only is the headset a detriment to the finalist's coiffure (thus makes her less elegant), but it diminishes every chance for the remaining finalists to relate with each other - something that can be done otherwise inside the booth.
- The musical guest, Julio Iglesias, Jr., is more attractive than his younger brother Enrique, but his singing voice lacks character and distinction.
- Judge Maccioni who gave the lowest interview score of 2.00 to Miss Philippines (Miriam Quiambao) and Judge Schenkenberg whose slow hand failed him to vote on time in five entries.
- The limbo dancers during the swimsuit competition, though very talented, were distracting and sometimes took the attention away from the candidates.
As I said last year, and I repeat it again: the pageant organizers, or whoever is responsible for selecting the jury, should make every attempt to invite a non-celebrity as a judge. As suggested by a pageant fan, too much money is spent paying off "famous" people if a big chunk of that money can be saved by hiring a professional pageant fan for less.
The Judges
Text by Rafa Delfin