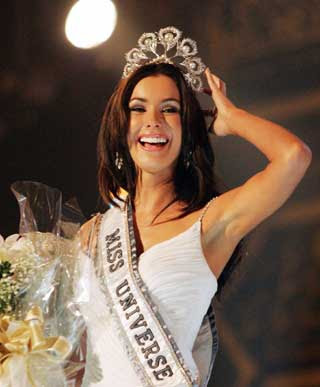 IT'S A HALO-HALO UNIVERSE
Sweet victory for Canada
NATALIE GLEBOVA, 23, a striking Russian-born model from Toronto, Canada, beat eighty other beautiful young women from around the world to win the coveted Miss Universe crown during a live telecast from Bangkok, Thailand last May 31st. Glebova's court include first runner-up press favorite Cynthia Olavarría of Puerto Rico, second runner-up Renata Soñé of the Dominican Republic, Laura Elizondo of Mexico, and Monica Spear of Venezuela. Glebova is the second Canadian to win the title (Karen Baldwin won in 1982). The other candidates who completed the semi-final list includes Misses Peru, Switzerland, Latvia, USA, Israel, Trinidad & Tobago, Greece, South Africa, Norway and Indonesia.
One of my favorite Philippine desserts is called halo-halo [pronounced HAH-loh HAH-loh] which in Filipino literally means "mixed." A typical halo-halo consists of the following ingredients: cooked red beans, cooked white beans, bananas, jackfruit, jello, sweet purple yam, sweet palm, macapuno, nata de coco, sugar, milk and shaved iced. Other fruits such as kiwi, papaya, avocado or cherries may also be added. And if you truly want to be decadent, you can also add leche flan (milk custard) and ice cream for topping. Dee-li-cious! Of course, as a vegan, I use non-dairy alternatives and the taste could be just as good as a regular one, but healthier! 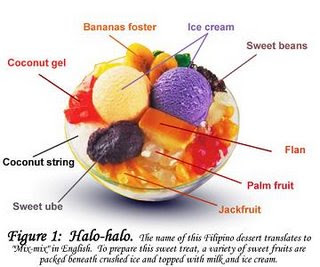