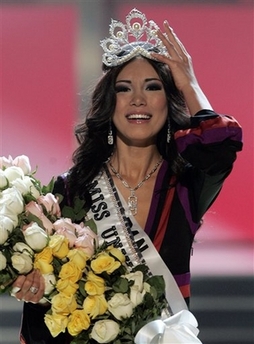 RIYO MORI, a 20-year-old jazz dance instructor from Shizuoka, Japan, was crowned as the 58th Miss Universe in Mexico City's Auditorio Nacional on May 28th. She is the second woman from her country to win the coveted title, after a 48-year-long drought. Akiko Kojima won in 1959. Mori's court includes first runner-up Nat?lia Guimar?es of Brazil, second runner-up Ly Jonaitis of Venezuela, third runner-up Honey Lee of Korea and fourth runner-up Rachel Smith of USA. The top ten finalists consisted of the delegates from Angola, Tanzania, Nicaragua, Mexico and India. The remaining top fifteen included the representatives from Thailand, Denmark, Slovenia, Czech Republic and the Ukraine. Special awards were given to Anna Theresa Licaros of the Philippines for bringing her country's seventh Miss Photogenic award, and to Ningning Zhang of China for Miss Congeniality. There was no Best National Costume award given this year.

Mori's victory is indeed very sweet. First, to her mother who herself had entered a beauty pageant in her twenties. Second, to her grandmother who had predicted that she would become Miss Japan before turning twenty. Third, to the group of students to whom she teaches dancing and who cheered for her in the audience along with her mother and grandmother. Fourth, to her national director Inés Ligron whose hard work and refreshing vision has restored prestige and recognition to the Miss Universe Japan Organization. Fifth, to the Asian pageant fans who had been praying for an Asian winner since India's Lara Dutta won in 2000. Mori's victory is also bittersweet for her country that has been plagued with high suicide rates (two high-ranking Japanese officials killed themselves early this week).

Okay, I'm happy that Japan won. But I'm not happy with most things.

THAT UGLY SCAFFOLD: This year's stage featured a four-level monstrosity of a gigantic scaffold divided into cubicles where most of the contestants (presumably those who did not make the cut) were placed and instructed to pose like Victoria's Secret supermodels for the duration of the show. From afar, the stage looked phenomenal, but this kind of set-up would be more appropriate with a large-scale Broadway musical. The scaffold was so large that the cubicles on the uppermost tier remained vacant, which gave the impression of incompleteness - or perhaps that MUO was expecting ten or more countries to fill up those vacancies. Subconsciously, the scaffold is the incomplete wall that separates the U.S. and Mexico. No matter how determined the U.S. is in finishing the wall, unwelcomed guests still manage to penetrate U.S. soil. Maybe I am overanalyzing, but those open cubicles symbolize the painful uncertainties in life: one never knows whether you get out alive or get stuck inside dead. I hate cubicles.

THAT UGLY FALL : Poor Miss USA Rachel Smith. During the evening gown segment, she slipped and fell and landed on her Tennessee derri?re. During the prelims, Smith wore a beautiful, soft and flowing green Carlos Alberto gown and six-inch high heels. Then she changed into a more sensual, sparkly dark number that contrasted beautifully with her skin tone. Several conspiracy theories have been raised by observers as to why she fell. Some are just ludicrous to even mention and some are just too funny to ignore. But the most likely is that she simply lost her balance. Flashback 1993: Colombia's Paula Andrea Betancur wore a pair of six-inch stilettos and her hemline got caught in some object on stage. But she did not slip or fumble. Flashback 1999: the Philippines' Miriam Quiambao lost her balance during the prelims and tripped, but she quickly recovered and dazzled the audience and judges with impromptu graceful poses. Though lacking Quiambao's gracefulness, Smith nevertheless persevered and showed utmost determination to stay in the game.

THOSE UGLY BOOS : If there was ever a candidate that faced the most odds, it was none of the hyped ones (Tanzania, Greece, or Spain) and certainly none of the Latin or Asian candidates who were adored by the press and the public. It was Miss USA. From her arrival in Mexico City, up to the live telecast of the finals, Smith had been repeatedly booed, constantly taunted, viciously insulted by some uneducated, unappreciative, uncultured and uncouth Mexicans. It has been commonly suggested that the boos and the jeers were not directed at her as much as they were to George W. Bush's illegal immigration policies. That's a load of piñata crap. Now it has become an undeniable fact that the Mexicans hate Miss USAs - which began in 1993 in Mexico City with Kenya Summer Moore, resurged in 2006 in Los Angeles with Tara Conner, and again in 2007 with Smith. Imagine one full month as Miss USA and having had to worry every minute about your personal safety.

Which brings me back to the Ugly Fall. Some observers are protesting Smith's advancement to the top five spots. Her evening gown average score of 8.754 was good enough to eliminate Miss Tanzania from the competition. But it was actually the boos that secured Smith a finalist spot. All of a sudden, the judges felt sympathy towards her, and legitimately so. If there's someone in the jury that knows about falling, it was Michelle Kwan whose infamous fall in the Salt Lake City 2000 Olympics cost her what could have been her first gold medal. Kwan was awarded the bronze medal. You can talk about the usual requirements that the judges are looking for in an evening gown competition - such as poise, grace, beauty, elegance and the way you "work" the gown; Smith might have lost her poise, but she managed to keep the other traits. The skating judges knew that Kwan possessed all the traits of winning the gold medal; although she lost her poise by falling, she got back on her feet and finished her program. Similarly, the pageant judges knew that Smith had all the right stuff to win the Mikimoto crown; despite falling - it was her fighting spirit that kept her in the game - and this is a trait of hers that impressed the judges the most. After all, a true competitor never gives up.

THOSE UGLY IMPRESSIONS : No matter what her detractors say about her weight gain, the outgoing queen Zuleyka Rivera looked radiant and beautiful on stage, even when she reacted nonchalantly to Riyo Mori's victory. A picture is worth a thousand words, but how would you intepret the images below? Is this Zuleyka's normal reaction to seeing someone winning, or was her mind preoccupied with more serious thoughts, like perhaps unsettled issues with MUO?

Nevertheless, Zuleyka's facial expression in these images may very well reflect the unhappiness of her reign, or its ugly side, or the booing crowd. During her final speech, she thanked her friends and loved ones and only three from the Miss Universe staff - "Nelson, Johnny, and Lark." No thanks to her travel manager Roston Ogata and no thanks to MUO President Paula Shugart (whom Tara Conner thanked incessantly after getting out of rehab). No thanks to her national director Magali Febles. But wait a minute. Zuleyka did not even bother giving Riyo a congratulatory kiss, or even a hug. What does this imply? That she was disgusted by Japan's victory? Or that she couldn't wait for the show to finish so she could pack her suitcases and travel with her family to Chiapas?

SO WHOSE RESPONSE WAS THE BEST? This year's pageant saw no clear stand-outs. Tanzania's Flaviana Matata may have introduced chic baldness, but she is hardly a beauty queen. Venezuela's Ly Jonaitis may resemble a classic Hollywood movie star, but she was easily eclipsed by the plastic-shoe-wearing Brazilian pageant patty Natália Guimaraes whose ineffable charisma and incandescent smile proved the antithesis to Zuleyka's unglamorous glumness. But like Zuleyka, Guimaraes did not show any congratulatory gesture to the Japanese Gucci princess. Korea's Honey Lee, the most beautiful face in the pageant, failed to deliver a coherent response to the question, "If you could have a type of superpower, what would it be and why?" Korean speakers panned the interpreter for having slightly mistranslated Lee's answer, but part of the challenge was the ability to be quick-witted, which Lee did lack. A translator's interpretation can surely affect a contestant's performance, like in the case of Venezuela whose Spanish-speaking interpreter abruptly cut her off, thus interrupting the fluidity of her thoughts - unlike Brazil's Portuguese-speaking interpreter who patiently finished Miss Brazil's response and did an excellent job in translating. Miss USA Rachel Smith, still recuperating from the fall, gave a somewhat safe response to an otherwise silly hypothetical question, "If you could return to one moment in your life, what would it be and why?" Subconsciously plugging in Oprah Winfrey's cause, Smith replied that she would go back to January 2000 when she went to South Africa so she could continue working with underprivileged children. When it came to Miss Japan's turn to respond to the question, "What is one lesson that you learned as a child that still affects you today?", Mori - in her rapid-fire Nippongo and hands on hips - quoted from her dancing experience as a child and mentioned "to be always happy, patient and positive" as traits that she wants to teach to the next generation. And this is why Japan won: her reply referred to the past, the present, and the future - much like how Dayanara Torres responded in Mexico City in 1993.

SO WHO REALLY LOST? By virtue of her quick recovery and sportsmanship (anyone who lacked confidence could have walked away the stage and cried of embarrassment), Miss USA Rachel Smith won the people's hearts as their sentimental Miss Universe. Now let's talk about the real losers: the booing Mexicans for shelving their dignity, Gloria Limpias because none of her girls made the cut (Paraguay, Uruguay and Bolivia - especially Bolivia who flunked once in Miss Earth 2006 and now in Miss Universe 2007), and Magali Febles (for the first time since she took over the national franchises, neither Puerto Rico nor Dominican Republic placed).

REDEEMING QUALITIES : Now it's time to talk about some of the good things about the telecast. I liked the introduction of the contestants wearing their national costumes. I have said it many times and I will say it again: international beauty pageants do not become fully exciting unless you put tons of colors on stage. This is what pageantry is all about: theatricality, metamorphoses, movement. The simple display of the huge golden Aztec sun - and two or three more Aztec icons - was a brilliant idea: they spoke volumes of Mexican culture from an abstract perspective without overwhelming the viewers. Abundant time was devoted to showing several points of interest in the host country, and recognition was kindly given to the Mexican officials who made sure the pageant would be a success. It was great to see Nicaragua entering the semifinals for the first time in 30 years. It was great to see diversity in the semifinals, which suggests that beauty comes in all shapes, colors and sizes. It was great to see Christiane Martel, the only Miss Universe from France, who looked better than most of the contestants. But most significantly, it was great to see a Japanese beauty avenging Kurara Chibana's undeserving defeat last year.

Photos courtesy of The Miss Universe Organization
at 6:48 PM