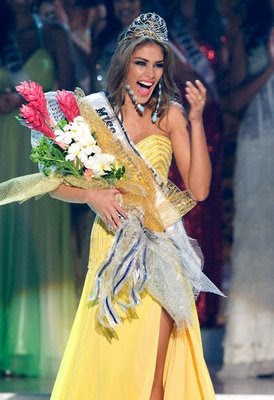 Venezuela wins fifth crown
But Colombia should have won!

DAYANA MENDOZA, a 22-year-old model from Caracas, Venezuela, was crowned as the new Miss Universe in Nha Trang Vietnam on June 14th. The show was broadcast live at 8 AM (Vietnam time) to benefit viewers in the U.S. East Coast who were watching at 9 P.M. Sunday night of June 13th. Mendoza's victory marks Venezuela's fifth Miss Universe crown since Alicia Machado won in 1996; it also reaffirms Venezuela's reputation as the most prolific beauty queen producer in the world. Mendoza's victory is also significant in the sense that she is the first contestant, Venezuelan or not, to have won the Miss Universe crown wearing a yellow gown. Mendoza's court includes first runner-up Taliana Vargas of Colombia, second runner-up Marianne Cruz of the Dominican Republic, third runner-up Vera Krasova of Russia and fourth runner-up Elisa Najera of Mexico. The top ten finalists consisted of the delegates from Kosovo, Australia, Spain, USA and Italy. The remaining top fifteen included the representatives from Japan, South Africa, Vietnam, Hungary and Czech Republic. Special awards were given to Gavintra Photijak of Thailand and to Rebeca Moreno of El Salvador for Miss Congeniality Universe. There was no Miss Photogenic award given this year.
Mendoza's victory was expected from the moment she arrived in Vietnam. Most pageant experts, missosologists, and even betting agencies had placed Mendoza as the eventual winner. Apart from what is mentioned about her in the official Miss Universe site, we do not know much about the new queen. A Wikipedia article states that she was a teenage model with Elite Model Management and that she has modeled for big designers like Versace and Roberto Cavalli who, by the way, was one of the judges. We also know that she was express-kidnapped for one day and then released. But we don't know anything about her family, her educational background, or anything else. They just crowned a mystery woman. I'd like to know the details about her kidnapping.
I watched the live telecast in the comfort of my living room along with a few friends, most of whom, including myself, were cheering for Miss Colombia. Read on.
WHY I PREFERRED MISS COLOMBIA : Mainly for sentimental reasons, and more. The last time Colombia won Miss Universe was in 1958 when a beautiful, doe-eyed brunette Luz Marina Zuluaga was crowned. Due to her victory, the Colombian government declared her tax-exempt for life. This year, Zuluaga celebrates her fiftieth coronation anniversary, and Colombians were hoping that a victory by Taliana Vargas would be the icing on Zuluaga's anniversary cake. Colombia almost won Miss Universe in 1992, 1993 and 1994, and if Colombia had won in those years and if Vargas had won this year, Colombia would have tied with Puerto Rico for the second most number of Miss Universe crowns. But it seems that the stars have not been in Colombia's favor, or that it has not been as lucky as Venezuela or even Mexico.
While selecting CB's choice for Miss Universe 2008, my associate Hector Joaquin and I were debating which contestant deserved our critical vote. Hector originally opted for Miss Puerto Rico Ingrid Marie Rivera, but I vehemently disagreed. I told him that Ingrid is overhyped and that she hadn't been her best since she won her national title last November, thanks to unnecessary surgeries and atrocious eye make-up with metallic shades during the preliminaries. Hector even admitted that Ingrid "has had it" with all the pressure that was being imposed on her. We needed to select someone fresh and free from controversy. Here comes Taliana (photo right). 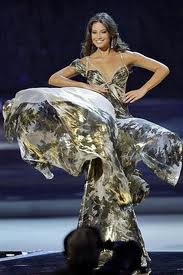 If Taliana had any detractors, it would be from any of the following sub-humans (LOL!): those who think that her response was not convincing, even though she spoke with a lot of sincerity and that her answer is similar to that of Denise Quiñones when she won in 2001; those who prefer Miss Venezuela's raccoon eye make-up and not-so fashion-forward sequined banana dress to a Beatriz Camacho original that Taliana worked to perfection; those who think her face is chubby even though there have been ex-titleholders whose faces are chubbier than hers (Rina Messinger - 1976, Irene Saez - 1981, Karen Baldwin - 1982, Barbara Palacios - 1986, and Alicia Machado - 1996); those who say that she lacks sex appeal, even though she made the top five of the swimsuit competition and she could pass up as the younger sister of sexy Mexican pop star Thalia; and lastly, those who just hate Colombian beauty queens for whatever reason.
UNITED STATES OF ASS : Last year's Miss USA Rachel Smith slipped and fell on her Tennessee butt while competing in the evening gown competition. It seems that history repeats itself. This time during the evening gown competition, Miss USA Crystle Stewart tripped on her gown's train and landed on her Texas  derri?re. Stewart wore a glistening, aristocratic and heavily-beaded gown by world-renowned Puerto Rican designer Carlos Alberto. Some posters in several message boards claim that the few changes in the gown (such as the addition of more beads on the hemline) added weight to the train and thus making it less manageable. Maybe. But a true beauty queen should be able to handle an accident as graceful as possible, and Stewart failed to do so. Beauty queens focus too much time on standing erect and working their gown, but they never learn how to recover with grace and dignity after they fall. Let this be a requirement for future beauty queens.
THE SADDEST GAL : Without doubt, Miss Puerto Rico Ingrid Marie Rivera. This young woman, who placed third in Miss World 2005 and was named the Queen of the Caribbean, left Vietnam empty-handed. I can imagine Miss World chairwoman Julia Morley gloating over Ingrid's misfortune: "That's what you get for thinking that Miss Universe is better than Miss World! Hah!" Ingrid will now be known as the Miss Puerto Rico Universe that has the saddest reign. She truly deserves a certain degree of sympathy: a victim of the Pepper Spray incident, a victim of badly calculated makeover, and recently, a receiver of tragic news (Miguel Curbelo, her mentor and trainer of four years, died while she was still in Vietnam). Despite all these incidents, Ingrid managed to persevere. Now, an article by Primera Hora claims that one of the reasons that Ingrid did  not place was due to the fact that her national director Magali Febles had failed to pay the full franchise fee of US$100,000 to MUO. Rabid Puerto Rican fans are now demanding that Febles, a Dominican, should step down and be replaced by a Puerto Rican director. Ingrid reacts [my translation]: "I am very satisfied with my work. I know that I did my best and that my biggest consolation is that my friends and MUO staff and even the judges said that I should have been in top five. That proves that my hard work did not remain unnoticed."(El Nuevo Dia, 7/14/2008)
GOOD STUFF : The production. Bravo for an excellent show! From the colorful stage to the dynamic hosts Jerry Springer and Mel B. From the unique act Lady Gaga and her flip-flop-wearing back-up dancers to the generous airtime afforded to promote Vietnam to the world. If you did not see the show, you would continue to think that Vietnam is still a country that has not fully recovered from the Vietnam War. But you would have been surprised to see dazzling images of Nha Trang and Ha Long Bay, well-preserved ancient Buddhist temples, majestic rice terraces, cosmopolitan Ho Chi Minh City, and busy streets filled with scooter riders and merchants. It's a country that I would love to visit some day. And it just so happens that Vietnamese spring rolls are one of my favorites! And lastly, outgoing queen Riyo Mori doing her final walk wearing an ultra-chic woman's tuxedo. She will certainly go down in history as the most fashionable Miss Universe ever.
The Judges