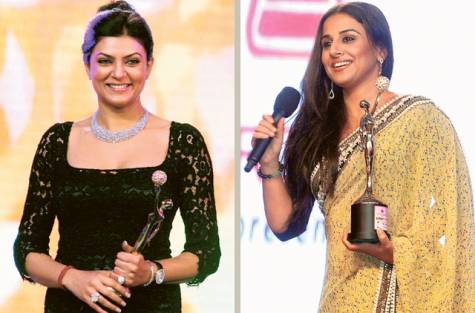 On the eve of International Women's Day, girl power was celebrated in all its colour and vigour in Dubai at the Gr8! Women Awards.
While Vidya Balan (photo, right), who was honoured with an award for her contribution to cinema, spoke at length about accepting ourself with all our flaws, former Miss Universe Sushmita Sen (photo, left) was all about being true to one's identity.
"While every award is special, what makes this special is that I am receiving it on the eve of Women's Day," said a breathless Balan. In town for the premiere of her film Kahaani, she wasn't sporting a fake belly at the glittering awards function that saw Bollywood-themed performances from Neha Dhupia (Femina Miss India 2002) and Yana Gupta.
"Now I feel miniscule and small … I think when you accept yourself, the world accepts you — with your mood swings, curves, your bad hair days. Let us celebrate what we call stree shakti [women power] — the unique power and strength that we possess." It was Balan's second award of the day after receiving the prestigious National Award for Best Actor for her drama The Dirty Picture on Wednesday morning.
Meanwhile, Sen won the guests over with her charming acceptance speech. As always, she relayed her message with wit and grace.
"Nothing in my life has been an act of charity. I say this with a hand on my heart. I don't believe in it. But I do believe, there's a responsibility that you are born with — to connect to another human being. I am very privileged that I got the platform to have such an abundant life so early in my life — I feel the more I do is less. Congratulations, ladies — the ones who have won tonight and the ones who had the courage to stand up and be who they are," said Sen, the mother to two adopted girls. She got the nod for supporting the girl child movement. "I want to thank my beautiful daughters and I wanted to add ‘my husband' — but I guess we will have to wait for that one. It is powerful to be a woman and even greater to be a human being," said Sen smiling at her mother, who was down with fever but did not want to miss out on the winning moment.
The awards, instituted by Anu and Shashi Ranjan of Indian Television Academy, honoured women from the UAE, India, Egypt and Bahrain — for their remarkable contribution to various fields including entertainment, medicine, charity and human rights. Legendary actress Asha Parekh was also celebrated for her charity work.
SOURCE: Gulfnews.com, 3/11/2012