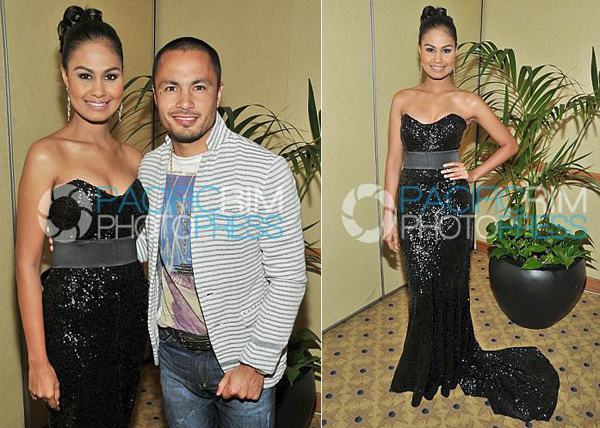 Filipino model/actor and heartthrob Derek Ramsay along with former Miss Philippines 2010, Venus Raj joined forces as they made a celebrity appearance at the 2012 Miss Galaxy Empress pageant held last Saturday, March 10, 2012 at the Crowne Plaza Hotel LAX in Los Angeles.
The pageant celebrates queer male cross dressers and transgenders to promote awareness, equality, and advocacy for the LGBTQ community.
The event was packed with fans hoping to get a glimpse of Derek and Venus. The twosome didn't disappoint as they took photos with fans before the beginning of the pageant.
Venus mentioned to this reporter's affiliate, Chris Trondsen of Pacific Rim Video / Front Row Features that it was an honor to be part of this event as her gay friends were the ones who helped her in her steps in becoming Miss Philippines 2010 which led her to being in the top five of that same year's Miss Universe pageant. Venus emceed the event with Balitang America's Steve Angeles and Irish actor/model Gavin O'Fearraigh.
SOURCE: Examiner.com, 3/12/2012
Photos by Sthanlee B. Mirador of PRPP