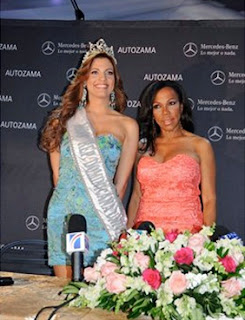 Dulcita Lieggi Francisco, a 22-year-old model, has been crowned as the new Miss Dominican Republic Universe 2012. She replaces the original winner, Carlina Durán Baldera, who was dethroned a few days after her coronation when it was revealed that she had been married and divorced. Dulcita was crowned by her national director, Magali Febles (above) at 7:00 PM tonight (Wednesday, April 25).
The new queen, who represented Distrito Nacional, studied advertising at Universidad Iberoamericana (UNIBE) and speaks four languages.