I am woman, hear me roar. I'm Jenna and I cannot be ignored!

A reliable source informed Critical Beauty early this afternoon - through consultation with the Miss Universe Organization (MUO) Public Relations Director Brenda Mendoza - that MUO had tried calling Jenna Talackova several times to discuss her complaint, but that Talackova never answered her phone once. Mendoza stated that MUO has always been an "open-minded" organization, but that they could not properly assess Talackova's situation without actually speaking with her. Finally, MUO found out the reason behind Talackova's silence: she had received instructions from her lawyer, the controversial, annoyingly loud anti-discrimination and feminazi lawyer Gloria Allred, not to speak to the media (even though MUO is not really a member of the media but a private organization that could be Talackova's potential employer).

Defending her client, Allred remarked: "“Jenna entered this competition and gave the pageant her time, her best efforts and her money. She did not think for one moment that what she might have looked like at birth would be relevant. She did not ask Mr. Trump to prove that he is a naturally-born man, or to see the photos of his birth, to view his anatomy, to prove that he was male. It made no difference to her. Why should it have made a difference to him?”

Why should it have made a difference to him? Uhhh.... helloooooo, Gloria!!! It's Trump's private company, it's his pageant, it's his rules. Who in his or her right mind would ask a potential employer strictly personal - and highly irrelevant - questions? How dare Allred advise Talackova to demand that Trump allow transgendered contestants? Granted, MUO does not mention any rules regarding sex-change or other type of surgery, but this does not mean that MUO cannot bend its rules to fulfill an agenda which could be good for the business. And yes, it eventually boils down to business. Trump thrives on publicity, and pageant fans are sophisticated enough to realize that Trump would concoct controversies revolving around his pageants to gain more publicity.  Trump likes to boast that the Miss Universe pageant is seen in 150 countries, but he's too soft to admit that the ratings for his pageant have been dismal in the last four or five years. But there's a solution: manipulate the media.

Lovely and beautiful as Talackova looks on the outside, one questions whether she is also lovely and beautiful inside. The website TheDirty.com published photos of Talackova's involvement in a bar brawl in Vancouver in 2010, where she and others are shown beating a woman: 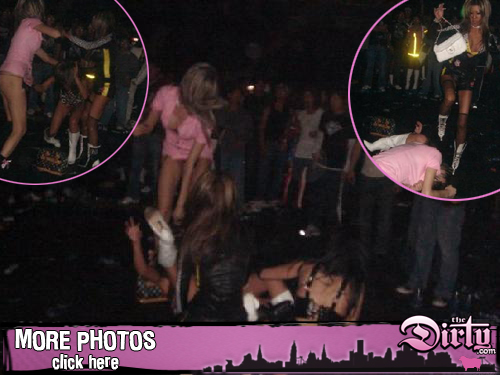 Based on the photo above, can you honestly say that Talackova would make a first-rate beauty queen, much less an ambassador of goodwill? I don't think so. Not only is she a failed diplomat, but she's also a bona fide liar. On her application form for Miss Universe Canada (MUC), she wrote that she was a natural-born female but she changed her story when pageant officials confronted her after suspecting that she might have been born male. Where is her sense of integrity?


One wonders if the whole Talackova controversy was orchestrated by Trump himself. Even if this were true, there wouldn't be losers, except maybe for some natural-born contestants who have dropped out of the Miss Universe Canada competition or several state and regional directors who were displeased by Talackova. Overall, everyone would be a winner. The Miss Universe Canada pageant, which is essentially ignored by the Canadian media, is all of a sudden enjoying tons of exposure and publicity that it never had before. Expect more potential candidates from marginalized segments of society to sign up next year (and surely enough, more candidates mean more income for the pageant organizers). Talackova is now a global transgender icon, and even if she decides not to compete anymore in any pageant, she will certainly make money doing interviews, appearing on talk shows and GLBT circuits, appearing on music videos, or from selling her story to a prominent TV or movie producer.

The transgender community is ecstatic because Talackova has raised the public's awareness about the complexity of human sexuality and the heart-breaking struggle and pain that all transgenders have to go through. And for every heart-breaking story related to the GLBT community, you will always find sympathizers who are willing to provide volunteer service or to write a check payable to that community. Oscar Dimant, the guy who started the petition to reverse the disqualification of Talackova from Miss Universe Canada pageant, is happy that his petition may have worked wonders.

Trump, of course, is having a ball because the Talackova story has attracted worldwide media attention - which indirectly promotes his business empire - which in turn perpetuates beauty pageants - which in turn make us pageant fans happy and craving for more.


I am woman, hear me roar
In numbers too big to ignore
And I know too much to go back an' pretend
'cause I've heard it all before
And I've been down there on the floor
No one's ever gonna keep me down again
- "I Am Woman," by Helen Reddy