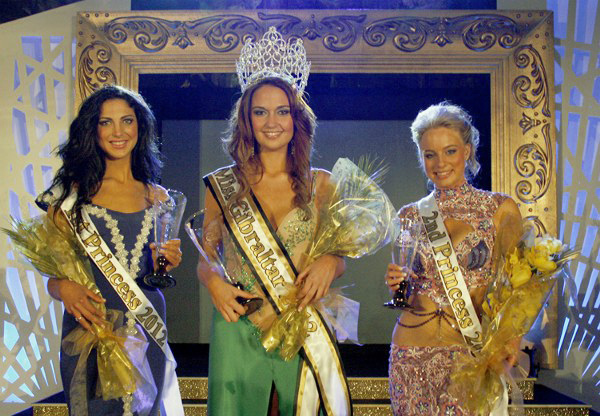 Jessica Baldachino (center) is the new Miss Gibraltar. She will reign in the fiftieth anniversary year of the Miss Gibraltar pageant.  First Princess was Kerriane Massetti (left) and Second Princess was Christina Ainsworth (right).
In its 50th year Miss Gibraltar 2012 will be remembered not just for its historical significance but for having overcome a two and a half hour delay following a major electrical power failure to St Michael’s Cave and Upper Rock. Promptly starting at 9pm, just 25 minutes into an energy driven production which promised a night of top class entertainment, the show came to an abrupt stop. It was undoubtedly its elegant, dynamic and overall strong production values which saved the night.
SOURCE: The Gibraltar Chronicle, 4/16/2012