April 30, 2012
Contestants at an annual Taiwan beauty pageant will be required not to partake in extra-marital affairs, the contest's organisers have told the BBC. The unusual move by Miss Globalcity Pageant, the largest home-grown beauty contest, comes amid public concern over revelations of celebrity love affairs.
To join, women must sign an agreement to abide by contest rules - this now includes not becoming a mistress. Any woman found to be involved in such an affair will be disqualified. 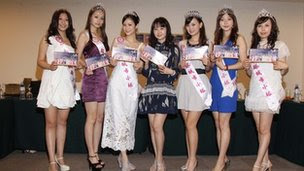 Seven women (photo), including two past winners, have already made a public pledge representing this year's contestants, organisers said. Standing in front of news photographers and reporters, they shouted: "Happy City - say no to being a mistress!"
Contest organiser Fifi Chang says the agreement will stay in place for a year, adding that the new rule is aimed at "preserving families". "In the past, we've never done this, but we decided to do it this year because it seems being a mistress has become a trend," Ms. Chang said. "We hope to teach the women to have a correct attitude. It's not a very good road to go down. So you first must refuse the man."
Celebrity revelation
Although the agreement only stays in effect for one year, Ms Chang said she hopes the women will stay away from married men even after the year they are involved in pageant activities. It introduced the rule because of the recent admission by one of Taiwan's biggest baseball heroes, Chien-ming Wang, that he had an eight-month affair.
The revelation shocked the public. Mr. Wang, a pitcher for the Washington Nationals, is beloved by many Taiwanese not only for his pitching skills before he suffered injuries, but also for helping to raise Taiwan's international profile, at least in the world of baseball.
The topic of "home wrecking" has also received a lot of attention. Many Taiwanese were engrossed in a popular soap opera last year that portrayed a mistress tearing apart a family. "Many girls think it's OK to be a mistress, because young people nowadays want whatever they desire. They don't think about the consequences," said Ms. Chang.
Signing the agreement to abide by the contest's rules and not hurt the image of the pageant, inevitably meant not taking part in an extra-marital affair, Ms. Chang said, adding that she was confident the media and "netizens" would help expose women who lied. Dozens of women have signed up for the contest so far and up to 200 are expected to join by the end of registration deadline in late May. The contest will kick off in June, with the winner to be chosen in August.
SOURCE: BBC News, Taipei, 4/30/2012