Transsexual will be allowed to compete in Miss Universe Canada provided that... 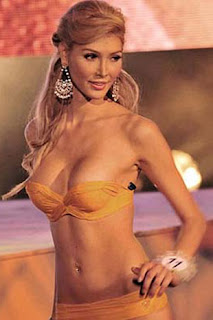 Jenna Talackova, the Canadian beauty queen, won’t have to fight Donald Trump for a chance to compete for the Miss Universe Canada title after all, even though she was born a he.
Talackova is everything you think of when you hear the words “beauty queen.” With her bright smile, flowing blonde hair and viciously long legs, you can’t deny she’s stunning.
But Talackova, 23, was first disqualified from the Miss Universe Canada competition because she was born a male, according to CTV. Talackova was originally selected as one of 65 finalists for the Donald Trump-owned competition and her profile and photos were pulled from the Miss Universe Canada website.
But the Trump organization has reversed its decision, announcing today that it won’t attempt to keep Talackova out of the contest.
“The Miss Universe Organization will allow Jenna Talackova to compete in the 2012 Miss Universe Canada pageant provided she meets the legal gender recognition requirements of Canada, and the standards established by other international competitions,” Michael D. Cohen, executive vice president and special counsel to Donald Trump, said in an email.
The Miss Universe Canada website states that to enter, women must be a Canadian citizen and between the ages of 18 and 27. If basic requirements are met, they are asked to fill out a longer application form. The form does not mention any rules against sexual reassignment surgery.
Talackova and her attorney, Gloria Allred, had scheduled a news conference for Tuesday in Los Angeles to discuss “why Jenna should be permitted to compete and what action [Allred] plans to take in the United States on behalf of Ms. Talackova if the Miss Universe Pageant refuses to change its discriminatory rule.”
The blonde beauty has not tried to hide her past. In a 2010 YouTube video for Miss International Queen, a transgender/transsexual competition in which Talackova was a contestant, she states that she began hormone therapy at age 14. At 19, she had sexual reassignment surgery.
A petition was started on Change.org asking Miss Universe Canada to “reverse the unfair disqualification of Jenna Talackova.” The petition was signed by tens of thousands of people.
Other fans have flocked to Facebook and Twitter to express their feelings over Talackova’s disqualification.
“Disgraceful. This is flat-out discrimination,” one fan commented on the Miss Universe Canada Facebook page.
“@JennaTalackova should NOT have been disqualified from @MissUniverse! Beautiful is beautiful. Down with discrimination,” one fan tweeted.
But reactions to Talackova’s story have been mixed.
“If she never stated on her application such detail, I support this decision,” one Facebook user posted to the Miss Universe Canada page.
This isn’t the first time a transgender woman has been disqualified from a competition. In 1976, Renèe Richards, a professional American tennis player who had sexual reassignment surgery to make her a woman, was denied entry into the U.S. Open by the United States Tennis Association unless she agreed to chromosomal testing. The USTA cited an unprecedented, women-born-women policy. Richards took her case to the New York Supreme Court, which ruled in her favor in 1977, allowing her to play as a woman.
The crown for Miss Universe Canada will be awarded May 19 in Toronto.
SOURCE: ABC News, 4/2/2012