May 09, 2012
An Open Letter to BPCI and ABS-CBN
by Jonathan Santos for Critical Beauty
Dear ABS-CBN,

First, congratulations for a job well done in handling Binibining Pilipinas for the past two years. You have showed what you are capable of doing and I am sure that you will do wonders in the next years to come. Speaking of which, let me review the show as it was shown on TV.

It was scheduled to start after Sarah G. Live – 9:15 PM to be exact, but it was shown 9:20 PM The pageant started live at 7 PM. Social media was already being flooded with updates about the pageant – from the stage design, to the list of winners. I will deal with that later, but let me review the pageant 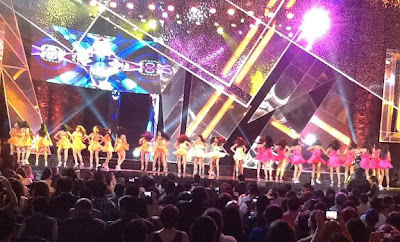 One word to describe this part - festive.
It was really nice to see the girls dance. And they were really good at it. The song used was really festive. The opening dress was better than last year. Live introduction was a welcome change and should be kept in the future editions.
This is also where we get to see the stage for the first time.
I should say that this year’s stage design was way better than last year’s. But it was smaller. It looked cramped and crowded on TV. Oh, I missed the revolving ramp/stairs from last year. They could have used that again.
I also would have loved if you had maximized the venue’s space. People entering from the audience area, props all over, audience participation.  Take a look at the opening of Miss Universe 1998 and 1999.  Now that’s the Caribbean festivity you were aiming to accomplish.
Swimsuit 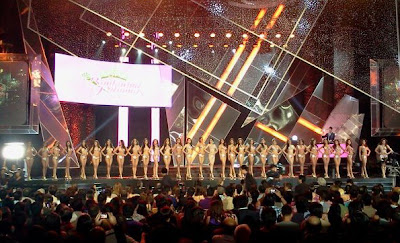 The feel of this segment was very reminiscent of Miss Philippines-Earth 2009 pageant. But, kudos on bringing an innovation to the local pageantry! Having a DJ spin during the swimsuit segment is a welcome change. He set the tone; sadly, some of the girls were not able to match it. Some of them walked slower, some so-so, some tried doing a Shamcey walk. The one-liner description of the delegates just did not work, and having a commentator would have solved this problem.
Oh, the set-designer for this round should be fired. There’s absolutely no point and no use of that detached mini-stage/stairs in front of DJ Callum David. The DJ’s booth can be put in the middle of the stage, or make a ramp that will connect his location if the director wanted exposure for him.
Evening Gown

Let me start by saying that we associate this segment with elegance, slow songs, and dim lights. These were the things that the show’s director had in mind in regard to this segment. 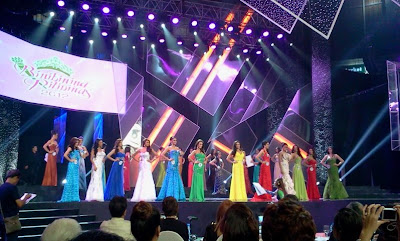 Arnel Pineda - I know he is a great singer, but his choices of songs for the pageant were not right. He made this portion very boring, and made it look like his practice venue for a videoke match, or for his next tour. And his performance was cut short on TV. In fact, it was poorly edited that you’ll notice the cut. The first set of gowns was not good. Some were tacky and heavy. Others were okay, but nothing outstanding.
The second part was lively, thanks to Bamboo and his song choices. Gown choices were more tacky and heavy compared to the first. Good thing? The girls knew how to walk in their gowns. Only a few stood out.
Special Awards
I believe this is one of the reasons why we should be having a pre-pageant show. Our national pageant has to give away a lot of special awards – nine - from best in swimsuit to Miss Avon. And when you give out awards, you do not send a barrage of people to hand the award to the winner. Maybe what you can do is to announce the winners, ask them to go in front, and then give the prizes/awards/sashes backstage. If you want the sponsors’ people to have airtime, do it during a televised preliminaries.

Announcement of Semi-finalists
Good job on doing this the right way – in random order. Plus the background music added up to the suspense. And it’s also good that the announcement was done in random order as opposed to last year’s.

Interview
Judges who would be asking the questions were randomly selected via computer, and his/her name was displayed on the huge LED display. Same like last year, but it’s fun and adds to the element of surprise.
The girls answered the questions from the judges without doing a Janina San Miguel or even a Jeanie Anderson. All of them were able to express themselves in just one attempt.
At least that’s what we thought.
Apparently, some of the delegates were given another shot to answer the question given to them by the judges. I will not judge them, but I will say that everyone should be given that same chance to redo their interview.
I wish that the final question will be put back again. 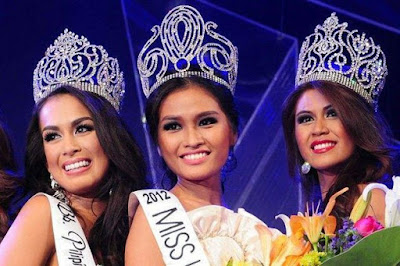 The winners were picked out of the 12 semifinalists. They started with the 2nd Runner Up (Analie Forbes), then the 1st Runner Up (Elaine Moll), then the crowns – Bb.Pilipinas International (Nicole Schmitz), Bb.Pilipinas Tourism, (Katrina Dimaranan) and Miss Universe – Philippines 2012 (Janine Mari Tugonon).


The announcement was exciting and suspenseful, but then again, there were too many people on stage to crown the winners. I understand that there are 3 crowns, but to dedicate airtime for the crowning of each one is just not right. It eats up precious time. Second, you can announce all the winners then crown them altogether.
Overall impressions 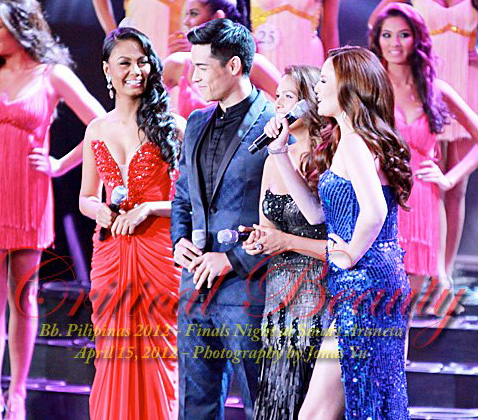 The hosts were average. Venus Raj did well, but her regionalist accent was very evident. Georgina Wilson was also good, except for mispronounced Tagalog words, which is understandable because Filipino is not her native language, although she could have practiced proper pronunciation.  Xian Lim – this man has potential, but should be trained more. Let him know what H.E. means ("His Excellency"). Teach him how to control the tone of his voice.

Audience reactions are okay, as long as it they're properly edited. You do not insert them while the contestants are dancing, or doing their walk, or while they are answering a question. It's preferable to insert them during the announcement of semifinalists, or during segments where there is audience participation. Unnecessary inserts take away the momentum of the segments.
Lighting is definitely an improvement, but it was still dark especially during the evening gown portion. Dimness does not mean elegance. It just made the segment less interesting to watch. Camera work was not good and needed a lot of improvement
Telecast was delayed for an hour or two. This is where I want to focus on, and would like to raise a few points:

I hope you consider my suggestions for future productions. Thank you for your attention.