Contributing writer Jenn Hoffman wrote a rather scathing article in Reality Nation entitled, "Sexy and Stupid: Are All Pageant Winners as Delusional as Dayana Mendoza?" - about the former Miss Universe's appearance on "The Celebrity Apprentice." Dayana was "fired" by Trump during last Sunday night's show. You can read Hoffman's entire article here.

If you think co-star Lisa Lampanelli came across as a total psycho bitch to Dayana, then Hoffman  may very well be the lovechild of Lampanelli and raucous radio personality Howard Stern! Here's Hoffman's article (with my rebuttals in bold and in parentheses):

1. They have to get rid of Dayana without destroying the image of the Miss America/Miss Universe brand, which incidentally Donald Trump owns.  (You can tell right away that Hoffman is not a pageant fan, because if she were, she'd know that Trump does not own Miss America. And she's supposed to be a "one woman media juggernaut.")

2. Every single person she worked with described her as “annoying, useless, disastrous and stupid.”   (False. Dayana was much praised by her colleagues for winning Task 3 that she managed.)

3. Dayana was fired and it wasn’t nearly fast enough, but I’m sure her demise came without lots of private discussion about how to make her look partially intelligent or sane. (Clearly she had enough intelligence to win Task 3, not to mention the fact that she maintained her poise, coolness, and excellent organizational skills. Dayana was not even supposed to be the project manager; Teresa Giudice had volunteered, but Dayana stepped up by convincing her team that she would be more suited for the task. That's a sign of brilliance!)

4. Unfortunately for her, she still came off as batshit stupid. (This coming from a former competitor of "The Apprentice  - Season 6" who never won a task and got fired during the 7th week, and years later would be banned from a posh hotel for tweeting about another guest.  Now that's stupid!)

5.On the upside, now Dayana can go back to being the beautiful, yet vacant face of an organization that showcases bombshell bodies that play host to empty seashell-esque brains. I’m pretty sure if you hold Dayana up to your ear and listen carefully, you can hear the sound of the ocean. (Epic failure in the use of alliteration: bombshell...seashell-esque brains. WTF!  The ocean sound reference is amusing, though. Gotta give Hoffman a little credit for that!)

6. Obviously Donald Trump values beauty, but from personal experience on The Apprentice I know he also respects brains, so I’m surprised so many vapid women end up associated with his pageants. (Listen, Hoffman. Trump's pageants are primarily about looks, and just so you know, he owns a modeling agency always looking for fresh faces. It's not a pageant for rocket scientists or Nobel laureates, but for superficially beautiful women, which you're obviously not.)

7. Maybe some pageant winners will be offended by my comments, but that would make them completely fucking delusional.  I’m sure some pageant winners are smart, but rather than speculate about the barometer used for gauging contestants’ intelligence, I offer you this video: (Hoffman posts the video of Miss South Carolina Teen Caitlin Upton delivering an embarrassing response during the Q & A segment of Miss Teen USA 2007. Posting the Caitlin video is irrelevant to Hoffman's Dayana-bashing because true pageant aficionados know that Trump's pageants have never claimed to test a contestant's intelligence, so it appears that Hoffman deluded herself into thinking that Caitlin represents all unintelligent pageant contestants. Caitlin might not have answered the question to most people's liking, but hey, she answered, and that's what counts!)

8. Caitlin Upton is the kind of woman who wins a title at the state level of the Miss America contest and Dayana Mendoza is the type of dolt who wins Miss Universe, so you have to wonder about the standards associated with these competitions. (When Hoffman competed in "The Apprentice," she described her job as a publicist; she must have been a mediocre one because a good publicist would certainly do extensive research about a subject that interests him/her. Dolt?  It's obvious that Hoffman has never seen Dayana's  witty response to her Q&A in Miss Universe 2008 which she won. When asked this question, "Do you believe men or women have it easier in life?" Instead of giving a canned answer, Dayana used metaphor - and in English, too: "Actually, God made us to share our difference. But big difference between women and men doesn't matter with what kind of life they live. Men think that the faster way to go to a point is straight. With women, the faster way is to go to the curve and fixing every curve." [thunderous applause]. That's hardly a response of a "vapid" woman.)

9. Think about it. Dayana is MISS UNIVERSE. She was chosen as a representation of the most ideal woman in our whole solar system. Soak that in. Does this mean we still only judge women by their physical attributes? If the most ideal woman in the universe is stunning on the outside, yet a total dud on the inside, that doesn’t fare well for the standards we use to choose who represents all of womankind.  (A total dud on the inside? Really, Hoffman? You can truly and absolutely evaluate a person's intelligence based on a mostly scripted reality show? Surely you wouldn't want us to call you an absolute piece of trash for tweeting a naked picture of you back in December 2010 (http://thedirty.com/2010/12/jenn-hoffman-of-the-apprentice-on-nbc-makes-a-huge-mistake-on-twitter/) 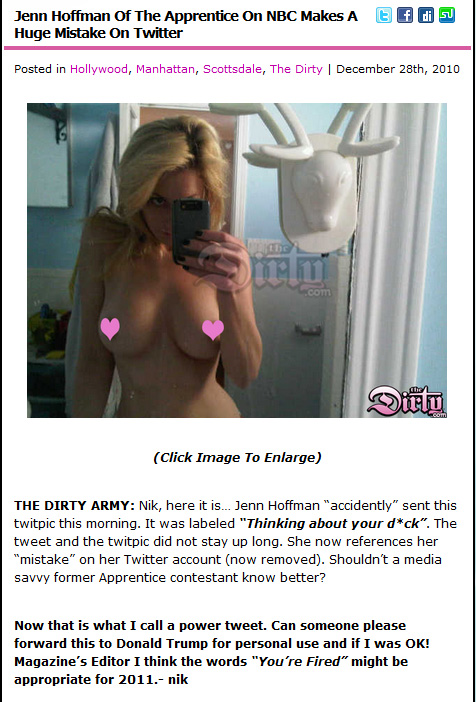 Couldn't get a lucrative work after "The Apprentice"  so she had to resort to this bimbo-esque banality to market herself? The rest of Hoffman's article is nothing more than an innocuous attempt to characterize all women competing in pageants as mindless creatures, and her assessment of pageants in general is utterly spurious.

10. Some people will say “Who cares? It’s just a beauty contest.” The problem is these women don’t see it simply as a beauty contest. They see it as validation and accomplishment beyond its original intended meaning. They think winning these titles means they are automatically rendered smart, as if the crown comes with a brilliant new brain attached to the bottom. (What a silly claim. In the almost twenty years I've been involved with pageants - from blogging about them to training and preparing contestants - I have never encountered anyone who thinks that winning a crown is equivalent to winning a Nobel Prize.  Girls join pageants for several reasons, and wanting to be validated for their intelligence is not one of them. Hogwash.)

11. Historically, beauty pageants have been perceived to be just about looks. Now they’re marketed to the public  – and the participants –  as much more. Miss America and Miss Universe winners are advertised to the world as the ultimate representation of a well rounded, complete woman. They try to sell us on the idea that the girl’s intelligence quotient is measured and scrutinized as much as her body. That’s why they have contestants answer bullshitty topical questions in the “interview” portion of the show.  Ironically this does more damage to their credibility, as so many of the contestants give shallow, rehearsed, inauthentic responses. (Hmmm... where have I heard these claims before? Ah, yes. From feminazis, from sour-graping contestants, and from women who feel insecure about themselves or feel threatened by beautiful women. What is lacking in Hoffman for her to let another woman affect her so negatively or better yet question her value?)

12. Instead they might want to consider running the contestants in circles around the floor of Madison Square Garden, along with a Westminster handler. At least we don’t have to lie about the standards for that competition. (So basically, Hoffman is trashing all pageant contestants by calling them figuratively as dogs. Feminazis, where's your outrage?!!! Animal rights activists, where's your wrath?)

13. Anyway, back to the Apprentice. (Actually, if Dayana had gotten fired on the first show, Hoffman wouldn't be writing her article. But the fact that Dayana lasted on the show for 12 weeks was more than enough for Hoffman to compose her asinine diatribe against the former beauty queen-turned-successful model.)

14. Clearly misinformation about what it means to win a crown got to one of these chick’s heads, because now we have Dayana running around Manhattan, complaining that 17 other accomplished, intelligent people are somehow marginalizing her and totally underutilizing her skills, when it’s clear to everyone watching that she doesn’t have any of these imagined skills. Is this the result of an overinflated ego, or is she just plain out of her mind?  (Winning a crown - the Miss Universe crown - carries enormous responsibility, one of which includes promoting the Miss Universe Organization's charitable alliances. The job requires extensive traveling and being constantly on your feet, and you're lucky if you get 3 hours of sleep. Don't judge a Miss Universe unless you've actually walked a mile in her 6-inch stilettos!)

15. Women like Dayana need to know that there’s nothing wrong with simply being beautiful. What’s wrong with just being pretty? Why does she also need to be regarded as intelligent? Not everyone is meant to be taken seriously as an intellectual, the same way not everyone is meant to be awarded for being attractive. There are many people who are both smart and sexy, but not every person on planet earth has to pretend to be both if they are not both. (Hmm... let's see. In Hoffman's official website, she is described by Forbes magazine as a "one woman media juggernaut." You can view samples of her work on her media section, and she does comes across as abrasive. She may talk the talk and walk the walk, but a fashion expert and stylist? Nah.)