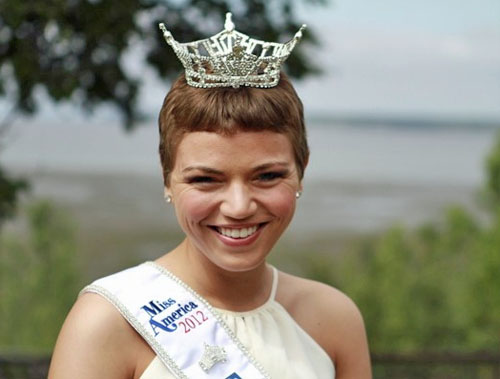 ANCHORAGE, Alaska — Just three months ago, Debbe Ebben had no hair. On Saturday night, she was crowned Miss Alaska.
Ebben shaved her head in March to raise more than $4,000 for the St. Baldrick’s Foundation, which donates money for childhood cancer research. She said she did it to let children who lost their hair because of cancer treatments know that it was OK to be bald.
Choosing her words carefully, she said losing one’s hair should be special — whether it’s voluntary or not.
“I wanted to put meaning and emotion behind it, and let them know why I’m doing it — for the kids,” she said. “I’m not shaving it to get attention. I’m not shaving it for publicity. I’m not shaving it because it’s a really easy hairstyle to go with. I’m shaving it for them.”
Ebben’s brown hair had grown back to a pixie cut by the time she became the state’s top beauty queen over the weekend, but she says she will likely keep her hair short when she represents Alaska at the Miss America pageant in January 2013.
“I’ll let it do its thing for a while,” she said, laughing. “I’ll consult the hair stylist before I go down.”
Ebben was the reigning Miss Chugiak-Eagle River when she picked St. Baldrick’s for the public service project that is required of all Miss Alaska pageant contestants. Baldrick’s gets its name from a combination of the words “bald” and “St. Patrick.” The organization was founded by three insurance executives who turned a St. Patrick’s Day party into a head-shaving event to help children with cancer.
Ebben said she got a feel of what the children go through.
“Like children who are fighting cancer, losing my hair was a really emotional experience, and something I hope they only have to go through once in their life,” she said.
As she approached the Miss Alaska pageant, she had to decide whether to keep the look. Her drastic haircut had been done in honor of a child, and she decided to let grow back her hair, so that the haircut wouldn’t be mistaken for a gimmick.
“I don’t want to be branded as the ‘bald beauty queen,’” she said.
She’s had two haircuts since March, and her hair is two inches at its longest.
In the upcoming year, she said, she plans to work with St. Baldrick’s and Headbands of Hope, which donates a spandex headband to a sick child and $1 to St. Baldrick’s for every headband it sells.
Bonnie Faulk, director of the Miss Alaska Scholarship Foundation, calls Ebben the epitome of the standards and values of the program.
“We are elated to have this young woman serve us,” Faulk said. “She has worked harder than many, many, many contestants in many years.”
Ebben said her road to Miss Alaska has “been a long journey.”
“This was my 16th pageant and it was more of, ‘The moment had finally come.’ And I was really happy it had come,” she said.
In lieu of entry fees, contestants raise money for the Children’s Miracle Network, the charity of the Miss America Pageant. Ebben was the pageant’s top fundraiser this year, raising nearly $1,500 through a community yard sale in north Anchorage.
Scholarships from the pageant, in turn, paid for Ebben’s college education.
“She’s out there. She’s the real deal,” Faulk said, who added that Ebben loves children and charitable events. “She’s what our program is about.”
SOURCE: Associated Press, 6/21/2012