GLAAD Responds to Miss USA Controversy: Miss Pennsylvania is 'Out of Touch' 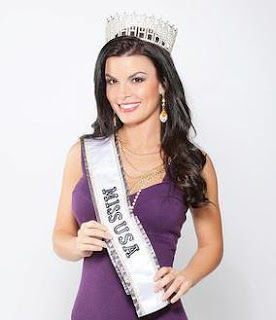 The Miss USA Pageant has recently come under fire after this year’s Miss Pennsylvania USA (real name: Sheena Monnin) decided to resign from her royal post, claiming the contest is rigged. According to Monnin's Facebook post (which has now been taken down), the pageant contestant had allegedly seen the Top 5 list before the results were ever announced on the show, implying that the show chooses its victors beforehand.

That allegation alone is scandalous. But the Miss Universe Organization has released a statement to Hollywood.com insisting that Monnin's reasons for quitting are entirely false. In fact, the group says Monnin resigned because she disapproved of the show's decision to allow transgender participants, and even had email documentation to prove it.

The statement reads as follows:

"The Miss Universe Organization can confirm the resignation of the Pennsylvania titleholder after she did not place in the Top 16 at the Miss USA pageant. In an email to state pageant organizers (below), she cited the Miss Universe Organizations’ policy regarding transgendered contestants, implemented two months ago, as the reason for her resignation. Today she has changed her story by publicly making false accusations claiming that the pageant was fixed, however the contestant she privately sourced as her reference has vehemently refuted her most recent claim. We are disappointed that she would attempt to steal the spotlight from Olivia Culpo of Rhode Island on her well-deserved Miss USA win."

The organization also provided a copy of an email, in which Monnin states the true intentions behind her departure. "I refuse to be part of a pageant system that has so far and so completely removed itself from its foundational principles as to allow and support natural born males to compete in it," the email read. "This goes against ever moral fiber of my being. I believe in integrity, high moral character, and fair play, none of which are part of this system any longer."

Not surprisingly, following news of Monnin's possible rejection of Miss USA's transgender-friendly principles, GLAAD has expressed its disappointment. “Sheena Monnin apparently decided to quit, rather than be aligned with an organization that treats all women as women,” GLAAD President Herndon Graddick said in a statement to Hollywood.com. "As more and more Americans get to know transgender people in their communities, in the workplace, and through the media, they are discovering the humanity that society has refused to acknowledge for so long. Monnin is out of touch with fair-minded Americans who believe that trans men and women are worthy of the same dignity, respect, and opportunity as all other men and women."

President of the National Center for Transgender Equality, Mara Keisling, also took Monnin's words as a personal offense. "As a trans person and a Pennsylvanian, I'm disappointed that the now former Miss Pennsylvania feels such bigotry toward trans people," Keisling said in a statement. "She says she is upset about a lack of honesty and fair play in the contest, but the real lack of honesty may be her unwillingness to publicly express her apparent transphobia. There is also a real need for allowing honestly by trans women who are being their true selves.”

But they aren't the only enemies Monnin has made since her allegations were released. Donald Trump — who runs the Miss Universe Organization — also said in a live interview on ABC’s Good Morning America that the pageant organization plans to sue Monnin for making such a “false charge” against the contest. “We’re going to be suing her now," Trump said. "She made a very false charge and she knows it’s a false charge."

Sounds like there won't be anymore crowns for Monnin anytime soon.
SOURCE: Hollywood.com, 6/6/2012