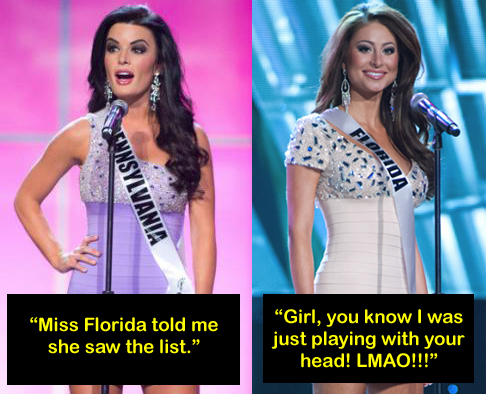 This beauty-pageant scandal is getting uglier.

The one-time Miss Pennsylvania who resigned from her post
after claiming that the Miss USA pageant was rigged is holding her ground on her story.

Sheena Monnin appeared on the Today show this morning and - despite legal threats from pageant honcho Donald Trump -  said she's prepared to defend what she believes she heard.

But the contestant who reportedly told her about the pageant-rigging, Miss Florida Karina Brez, has a different take on the situation...

Monnin alleges that Brez copped to seeing a list of the top five finalists before the 16 semifinalists were even announced.

"I know what I heard," Monnin stressed. "There's no doubt in my mind that the contestant was serious when she laid out what she said she saw, and I believe her to be true."

She also swatted down speculation that Brez's disclosure might have been a joke, saying, "I have many years of psychological training. I know when someone's telling a joke, I know when someone's scared and when someone's serious, and in my opinion her body language was very serious. She looked a little bit scared because she had just seen something that would potentially, drastically change the reputation of the Miss Universe Organization. This is a big deal."

Monnin also noted that the order in which the five finalists were announced synced up with what Brez claimed to have spied.

"When the names were called out in the order that she said she saw them on the list, that's just too coincidental to not be true," Monnin explained.

Brez, on the other hand, wholly denies Monnin's claims.

"I want to make a statement, very firm and very clearly, that I did not at any time tell Miss Pennsylvania USA or other Miss USA contestants that I knew the final five contestants in the pageant," she says in a statement to E! News. "For reasons I don't understand, my name is now being brought forward as the person who released the names and implied that the final five contestants were preselected. This is absolutely not true."

She admits that backstage during the pageant, she did see "a piece of paper with names on it, and like most people in such frenetic circumstances, joked that they must be the names of the final contestants. It was a throwaway comment, in the stress of the pageant, and was never meant as a fact. The list I saw didn't even have the eventual winner on it."

Brez adds that she has since conferred with pageant organizers about the allegations: "I have told them what happened, and that there was never any malicious implication made in my jocular statements. Miss Pennsylvania USA is using this situation for her own ends…I would never do anything to undermine the pageant in any way."

Trump has threatened to sue Monnin over her allegations, but said Wednesday he'd rescind that if she apologizes. But after her interview today, chances of a mea culpa from the brunette beauty are looking dim.

Pageant organizers are girding for a legal face-off. "The Miss Universe Organization continues to vehemently refute the false accusations made by the former Pennsylvania title holder and will pursue this matter to the fullest extent of the law," the organization said today in a statement to E! News.

Monnin resigned earlier this week, calling the pageant "fraudulent, lacking in morals, inconsistent and in many ways trashy" and sticking to her guns that the pageant was rigged.

Pageant organizers, however, have a different take, claiming that Monnin sent them an email allegedly stating that she took issue with the organization's decision to allow transgender contestants to compete, in the wake of controversy surrounding transgender Miss Canada Universe hopeful Jenna Talackova.

"As previously stated, Sheena Monnin resigned because of a policy change related to transgendered contestants, only to change her story by publicly making false accusations claiming the pageant was fixed," the Miss Universe Organization said. "Further, the contestant she cites as the source of her information adamantly denies these claims. It certainly appears Ms. Monnin is doing whatever she can to take the spotlight away from the rightful winner, Olivia Culpo, Miss USA 2012."