MISS UNIVERSE JUDGE: 'The Pageant Is Not Fixed, But Trump Made It Clear Who He Would Vote For'

June 14, 2012
The Daily's Richard Johnson, a former editor at Page Six and a three-time Miss Universe judge, says the beauty pageant is not fixed, but Donald Trump did make it clear to the judges who he would pick
Johnson writes:
"Just in case a judge was indecisive, Trump was sitting right behind us in the front row, close enough to chat with us during commercial breaks, letting us know his preferences. Was he just making small talk, or trying to influence our votes? Did his voice carry more weight than any other fan who was applauding and shouting for their favorite? Probably. But the pageant wasn’t rigged. I voted for the contestant I thought was the most beautiful. Most of the time, Trump and I agreed. But not every time."
Last week, the owner of the Miss USA, Miss Teen USA and Miss Universe pageants, told ABC's "Good Morning America" that he's going to be suing (now former) Miss Pennsylvania USA, Sheena Monnin (photo), for calling the Miss Universe Organization "fraudulent" and "trashy" and accusing the competition of being fixed. 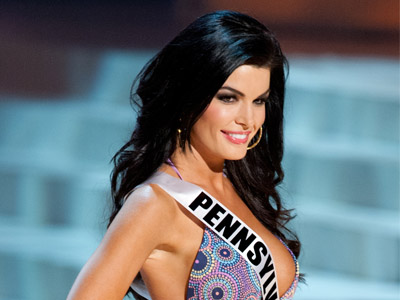 Monnin posted on Facebook after the pageant that she thought it must be rigged because she said another contestant (Miss Florida Karina Brez) had seen the top 5 list the morning of the competition before the top 16 finalists were even announced that evening, according to FoxNews.com.


"She made a very false charge and she knows it was a false charge," Trump said on GMA.  "She suffers from a thing called 'loser's remorse.'"
He called her allegations "totally ridiculous" and said that she should apologize.
"If you looked at her compared to people who were in the top fifteen you would understand why she was not in the top fifteen," Trump said on GMA.
Monnin resigned from her title right after the Miss USA 2012 pageant.
Just this week, another Miss USA contestant, who spoke to FoxNews.com on the condition of anonymity,  backed up Monnin's claims saying she also heard Miss Florida reveal the top five finalists before the top 15 were even announced.
SOURCE: Business Insider, 6/14/2012