(RTTNews) - In the wake of the annual Miss USA pageant broadcast on live television Sunday evening on NBC, Olivia Culpo, 20, emerged as the new victor wearing the highly coveted crown.
However, a now former Miss Pennsylvania USA has accused the pageant of rigging the competition and has followed up her claim by resigning her current crown as Miss Pennsylvania USA. After numerous requests, Sheena Monnin (photo), 26, revealed the reasoning behind her decision to step down on her Facebook page: 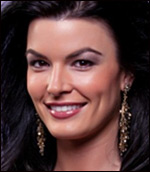 "I witnessed another contestant who said she saw the list of the Top 5 BEFORE THE SHOW EVER STARTED proceed to call out in order who the Top 5 were before they were announced on stage. Apparently the morning of June 3rd she saw a folder lying open to a page that said 'FINAL SHOW Telecast, June 3, 2012' and she saw the places for Top 5 already filled in."
Monnin did not make the final 16 during the pageant on Sunday night. She went on to say in her Facebook post:
"After the Top 16 were called and we were standing backstage she hesitantly said to me and another contestant that she knew who the Top 5 were. I said 'who do you think they will be?' She said that she didn't 'think' she 'knew' because she saw the list that morning. She relayed whose names were on the list. Then we agreed to wait and see if that was indeed the Top 5 called that night.
After it was indeed the Top 5 I knew the show must be rigged; I decided at that moment to distance myself from an organization who did not allow fair play and whose morals did not match my own. That is all I know about this. If this contestant would like to step forward as an eye witness and as being the one who saw the sheet with the Top 5 already selected before the judges ever saw the Top 16, then perhaps action can be taken. As for me, I believe her words and I will not encourage anyone to compete in a system that in my opinion and from what I witnessed is dishonest."

The damaging words have not only been backed by Monnin's personal resignation, but have been spreading rapidly over the airwaves even reaching UOL media in Brazil. Former Miss USA winners have answered in backlash at Monnin's actions.

Fakih herself is on six months of probation after being arrested for driving under the influence - twice her alcohol limit according to police reports - in Michigan.

The Miss Universe Organization has declined to make any comments regarding Monnin's accusations, and a receptionist has only said, "I can't answer that."

Phone calls to the Miss Pennsylvania USA state director, Randy Sanders, were not returned at time of print.


'It is a fraudulent and trashy organization': Miss Pennsylvania resigns claiming Miss USA 2012 was rigged