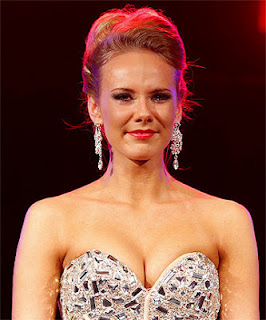 The newly crowned Miss Universe New Zealand is confident her application for citizenship will be fast-tracked so she can represent New Zealand in the Miss Universe pageant.
South African born Avianca Bohm (photo) is less than 36 hours into her reign, but she could be stripped of her tiara over questions about her nationality.
Bohm was given the title at a ceremony in Wellington during the weekend, but she will not be able to attend the Miss Universe pageant in December unless she gains New Zealand citizenship.
Competition organisers have admitted the 22-year-old should never have won because she is not a citizen, and they have blamed the judges for the controversial decision after they were told Bohm was not eligible to take the title.
The judging panel included Wellingtonians Lucire publisher Jack Yan (chairman), stylist and fashion editor Samantha Hannah, Salute Hair & Day Spa director Carl Manderson and Aucklanders May Davis and Danijela Unkovich.
Bohm told TV ONE's Breakfast today that she was not told she could not win the crown.
"I knew that there would be some sort of discussion [about citizenship] but I didn't think it would be blown out of proportion like this.
"I was told don't worry about it when it comes to that situation, we will just deal with it at the time, but don't worry about it beforehand."
Bohm told Breakfast that all the judges were aware she that she was not a citizen, and she does not think she will have to give up her crown at this point.
Bohm has been a permanent resident in New Zealand for four years and is expected to gain citizenship in March, which is four months after the pageant.
She now hopes her application for citizenship can be fast-tracked.
"I have heard of past situations where people are not citizens and they have represented New Zealand overseas, more sport based things like rugby or the Olympics, and I have heard they people have fast-tracked citizenship for them so I am staying positive and I am sure that it can be done for me as well because at the end of day I am trying to represent New Zealand not for my own benefits."
Bohm said she considers herself to be a Kiwi.
"My teenage years were in New Zealand so I'm more New Zealand cultured than South African cultured. However, South Africa is my birth country.
"I plan to make my future in New Zealand and will never move back to South Africa."
She said contact has been made with the Miss Universe organisers to see what they have to say about the situation.
She said she does not regret entering the competition and is aware of one other contender in the competition who is not a New Zealand citizen.
Miss Universe NZ admitted that it is odd that people can compete when they are not eligible to win.
The region Bohm represented, Howick, had to pay $3000 for her entry in the competition.
Bohm recently graduated with a fashion degree. She works as a brand ambassador and is a part-time model. Her interests include fashion design, sports, and reading. Her ambition is to become a qualified chartered accountant.
Bohm was crowned by Wellington's Priyani Puketapu who took out the title last year.
Runners-up
Miss North Harbour, Talia Bennett, came second in the contest and Miss Wellington, Lauren Mann, was third.
Judges Davis and Unkovich were respectively former runners-up in Miss South Africa and Miss New Zealand competitions.
- With Fairfax
SOURCE: TVNZ.co.nz, 6/5/2012