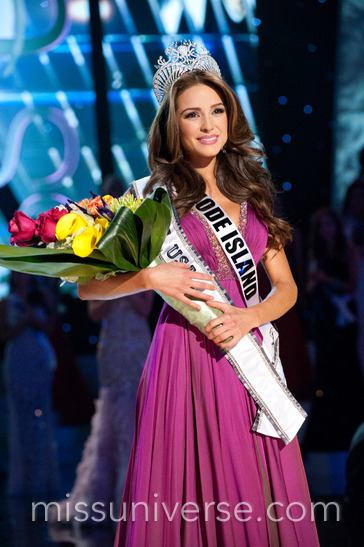 LAS VEGAS (AP) — The newest Miss USA winner is a Rhode Island cellist who describes herself as a nerd and aspires to be more like Hollywood icon Audrey Hepburn.
Olivia Culpo shares Hepburn's European heritage and dark brown hair and soon they will share something else. Culpo said after winning her crown Sunday night that she plans to go to Tiffany & Co. in New York and recreate Hepburn's iconic opening scene from "Breakfast at Tiffany's."
Culpo, a Boston University sophomore, will take a year off from her studies to tackle her duties as Miss USA and represent the nation in the 61st Miss Universe contest in December. The 20-year-old said she wished she could have shared her crown with her 50 competitors during the pageant at the Planet Hollywood Resort & Casino on the Las Vegas Strip.
Culpo strutted across the stage in a lilac bikini, then donned a flowing fuchsia gown with sparkly trim around her waist and décolletage. After making it to the final five, Culpo voiced her support for transgender beauty queens during the make-or-break interview round.
"Would you feel it would be fair that a transgender woman wins the Miss USA title over a natural-born woman?" asked celebrity judge Rob Kardashian. The question came from a pageant follower on Twitter, a first for the competition.
Culpo didn't hesitate before embracing the Miss Universe Organization's recent decision to admit transgender contestants.
"I do think that that would be fair, but I can understand that people would be a little apprehensive to take that road because there is a tradition of natural-born women, but today where there are so many surgeries and so many people out there who have a need to change for a happier life, I do accept that because I believe it's a free country," Culpo said.
Culpo said after the pageant that she wasn't put off by the question when she heard it. "This is a free country and to each their own," she said.
Culpo said she was short and chubby as a girl, but blossomed after a growth spurt. She spent her summers at band camp after learning to play the cello in second grade. Her parents are also musicians, and her love for music saw her perform at Symphony Hall in Boston and Carnegie Hall in New York City.
Culpo is a 2010 graduate of St. Mary Academy Bay View, an all-girls Catholic school in Riverside, where she was a member of the National Honor Society. She said she comes from a big, Italian family and speaks some Italian. On her Twitter account, she describes herself as a nerd and model.
"I was just so surprised, so shocked, so honored to be there," she said of her win. 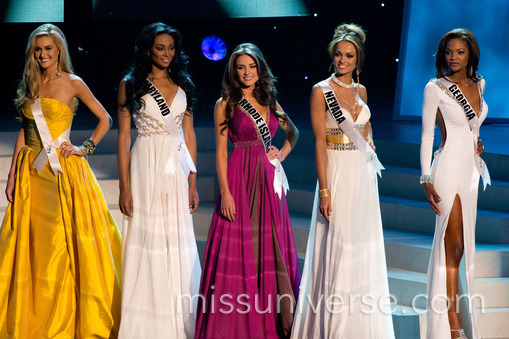 Rounding out the top five contestants were first runner-up Nana Meriwether of Maryland, second runner-up Audrey Bolte of Ohio, third runner-up Jade Kelsall of Nevada and fourth runner-up Jasmyn Wilkins of Georgia. As Meriwether and Culpo held hands waiting for the winner to be announced, Culpo bit her lip and cringed with anticipation.
Culpo demonstrated an outgoing personality throughout the competition, blowing a kiss and shimmying across the stage during the opening number. She cited Hepburn as her source of inspiration, noting her many years of volunteer work.
"She was beautiful on the outside, but also beautiful on the inside," said Culpo, who sang the chorus of "Funny Face" from her favorite movie of the same name after her win.
Miss Iowa USA Rebecca Hodge was named Miss Congeniality, and Miss Oregon USA Alaina Bergsma was named the most photogenic. They both won $1,000, but didn't make the top 16.
The pageant had three competitions: swimsuit, evening gowns and interview question. The contestants were whittled to 16 after the show's opening fashion show number. The contestants were later narrowed down to a field of 10 and then five.
Pop band Cobra Starship performed as the beauty queens modeled their string bikinis. Singer Akon danced with the top five during the evening gown competition.
Culpo had one of the more modest dresses of the contest, with many of the beauty queens wearing revealing gowns with bare backs, high slits and sheer fabric. In contrast, Culpo's flowing gown covered her legs and lower back while revealing some cleavage.
The judge's panel included Chef Cat Cora, TV personality Arsenio Hall and singer Joe Jonas. Andy Cohen and Giuliana Rancic stepped in to host. Miss USA 2011 Alyssa Campanella of California crowned Culpo her successor at the end of the night.
The first-ever transgender contestant to compete in the Miss Universe Canada pageant made it to the penultimate round before losing her bid to win the title last month. She was initially denied entry to Canada's pageant because she was not born female. Donald Trump, who runs the Miss Universe Organization, subsequently overruled that decision.
Miss Universe publicity director Brenda Mendoza has said transgender competitors are now welcome at all of its pageants around the world.
The competition is not affiliated with the Miss America pageant.
(Article by Cristina Silva for Associated Press, 6/4/2012) 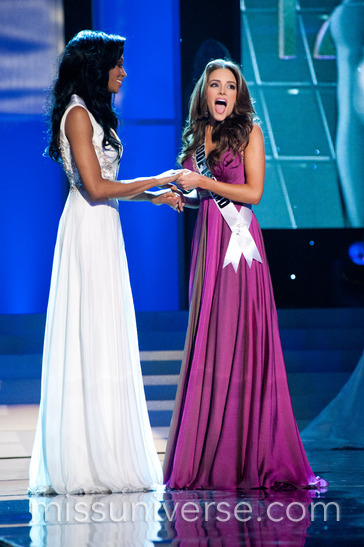 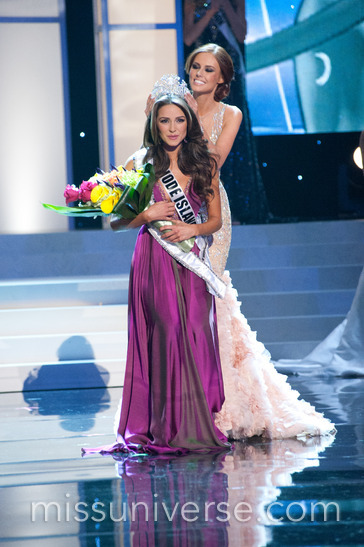