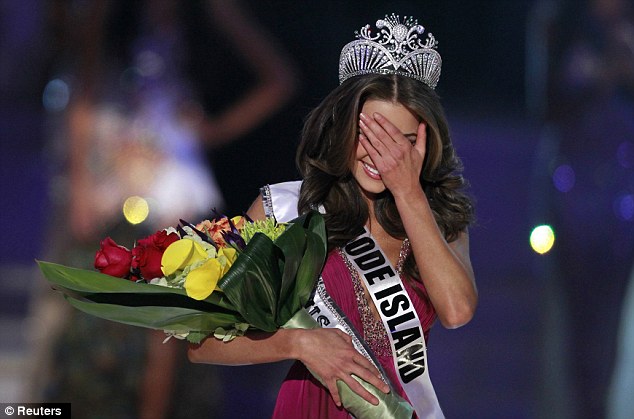 I saw the live telecast in the comfort of my living room while enjoying a snack of blue chips and salsa and blueberry soy yogurt, while at the same time posting updates and comments on the CB Facebook page. The introduction, which consisted of a fashion show featuring different styles from the Sherri Hill collection, was reminiscent of the opening of the 1997 Miss USA show. The difference is that in the 1997 show, the candidates wore clothes by different designers - thus, you could tell that the clothes were not made or cut from the same mold, which made it more interesting. In the 2012 version, if you're unfamiliar with Sherri Hill's designs, you'd probably gasp in awe of the seemingly diverse collection, but if you're an avid and loyal Miss USA fan like I am, you'd be less enthused by the Sherri Hill collection because you've seen it so many times - in photo shoots by MUO photographer Fadil Berisha, in videos, in programme books, on the MUO website, and everywhere else where Trump's beauty queens appear. Why's that? Because Sherri Hill is the pageant's wardrobe sponsor. That's great. But we're tired of seeing the same designs over and over again, and this habit mocks the real concept of being fashion-forward.
Anyway, as for the results, I am ecstatic that Rhode Island's Olivia Culpo won the coveted title. I was actually rooting for Nevada, Jade Kelsall, because she had Miss Universe (yes, Miss Universe, and not Miss USA) written all over her! So if the goal was to select the U.S. representative to compete with the fiercest competitors especially from Latin America, then Jade would have been ideal. Her regal stature, her smoldering exotic looks, and her hypnotic stage projection were hard to ignore. But she had the misfortune of having picked a daunting question from judge Arsenio Hall: "Why do you think some Miss USA contestants could not name the vice-president of the United States?" I mean, really, how would you even respond to this question? Kelsall could have gone the derisive route by implying that some of her colleagues were merely ignorant, but instead she chalked it up by responding that they just had a long and tiring day (although my instinct tells me that they are all Republicans and could care less about Joe Biden). Apparently, Jade's delivery received a rather lukewarm reaction from the audience.
It seems that it was Olivia's fate to win, and she can thank her lucky stars for having picked the inevitable question - referring to transgender participation in traditional female pageants - submitted via Twitter and asked by judge Rob Kardashian: "Would it be fair if a transgender woman won the Miss USA title?" Olivia's response: "I do think it would be fair ..." she said, recognizing that some people "might be apprehensive" because of tradition. But, she added she would be in favor of it because "there are so many people who have a need to change for a happier life. I do accept that because I believe it's a free country." The crowd gave her thunderous applause. Her response was neither patronizing nor polarizing, unlike Carrie Prejean's infamous statement in Miss USA 2009 in which she proclaimed her disapproval of same-sex marriage.
What's not to like about Olivia? She's naturally gorgeous, articulate, smart, and oh! - that luscious olive skin and those big, beaudacious brown eyes! She idolizes Audrey Hepburn (like I do!), she loves "Funny Face" (my favorite Audrey Hepburn movie), and she can sing! Watch this video by the Pageant Guy where MUO President Paula Shugart introduces her officially as Miss USA 2012 and sings a few verses of "Funny Face":
Winning Miss USA wearing a purple gown is unheard of, but Olivia pulled it off. Color commentator Jeanne Mai said it best: "She looks like a princess." Critics deride her short stature (she's barely 5'4") and argue that it will be her biggest impediment when she competes with glamazons in Miss Universe 2012. But who cares? As long as her height is proportionate to her weight and she oozes perfect symmetry (which she does), that's all that matters. Besides, I'd rather spend a whole year looking at a beautiful face (of a short girl) than a mediocre face (of a tall girl). A girl could have the total package (looks, height, personality, etc.) but she will never please everyone, thus she will always fall short in something. Olivia might be physically short, but she is amazingly tall in everything else. And I just hope the Miss Universe judges don't get too obsessed with height and fail to see the big picture when selecting the new Miss Universe in December. 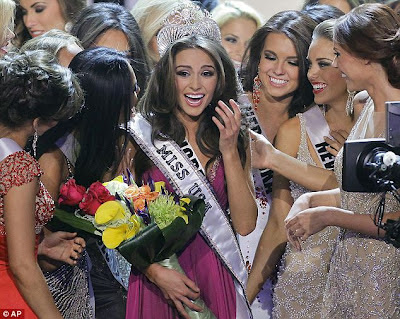