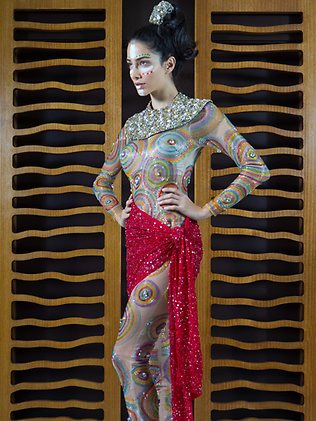 IT was labelled boring last year, but our national costume for the Miss World pageant is now being branded "Avatar".
The Aboriginal culture-inspired bodysuit for Miss World Australia Jessica Kahawaty has copped the thumbs-down from fashion experts.
Project Runway mentor Alex Perry said it looked more circus than serious fashion.
"I never knew Egyptian sea urchins were Australian? The creators of Avatar called, they want their catsuit back," he said.
"I can't see the connection to Australiana in this - it has a little too much Cirque du Soleil for my liking."
Project Runway runner-up and Melbourne bridalwear designer Craig Braybrook described it as: "Avatar going to the beach in a red sarong."
Kahawaty, 23, unveiled the outfit at a charity high tea in Melbourne as she continues preparations before the 62nd Miss World pageant in Mongolia next month.
Designer Julie Sufi, of Belluccio, said the outfit was inspired by Aboriginal art.
"It was a bit hard determining what a national costume is because we don't have one," Ms Sufi said.