China: a pageant has to be repeated after ugly winners had been chosen 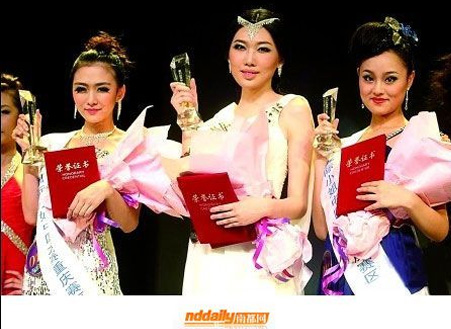 CHINA - The organizers of a beauty contest were involved in a national controversy because of the differences between the taste of the judges and  that of the public.
After choosing the three most beautiful women of the city of Chongqing, people went crazy and went on to criticize the choice of the jury on the Internet. The commotion was such that the organizers had to choose three new winners to try to calm things down.
"Since the three winners have generated so much criticism among bloggers and media in Chongqing, the committee decided to add a direct election and pick three winners," organizers told he newspaper South China Morning Post.
After that, six women - three original winners and three others yet to be named - will represent Chongqing in a national beauty pageant that will select China's representatiive to the 53rd edition of Miss International pageant.
Controversy erupted around the country after pictures were published of the three original winners.  Chinese social networks exploded with anger and harsh criticisms towards the results.
"The right one [in the photo] should be the mother of the winner, who has gone to collect the prize in her place," said a a netizen in his microblog Weibo, while another disgusted netizen who lives in Chongqing, threatened to leave town "If that was the level of beauty of local women."
After the controversy, one of the judges dmitted to "external pressures" in deciding the winners and acknowledged that judges had the final say in the decision.
"As a judge, I am very disappointed by the selection of three winners, and I don't think they represent the image of women in Chongqing," said the man, who asked that his name be kept anonymous.
Chongqing along the Yangtze River has a reputation for being the birthplace of beautiful women for the simple reason that it is a town with very few days of sunshine a year, and so the skin of its inhabitants is particularly white, which Chinese consider as a sign of beauty.
Such is the fame of the Chonqjing residents. A few years ago the municipal government launched a survey among its citizens to determine what the main attraction of the town was, and the majority response was "its beautiful women."
Translated into English from the original Spanish.
SOURCE: El Intransigente,  Argentina, 7/20/2012