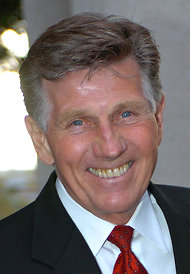 Gary Collins, a prolific actor who became a successful host of daytime talk shows and — for almost a decade — master of ceremonies for the Miss America pageant, died on Saturday in Biloxi, Miss. He was 74.


In a performing career that spanned more than four decades, Mr. Collins made guest appearances on dozens of television shows, including “The Virginian,” “Love, American Style,” “Charlie’s Angels” and “JAG.”
Mr. Collins became a familiar face in American living rooms in the 1980s as the congenial host of the syndicated afternoon talk show “Hour Magazine,” for which he won a daytime Emmy in 1983, and later, as the host of the Miss America Pageant from 1982 to 1990.
From 1989 to 1994, he was the host of another daytime talk show, “The Home Show,” on ABC.
Born in Venice, Calif., on April 30, 1938, Mr. Collins became interested in acting while in the Army, where he performed on the Armed Forces Network.
He had his first break in 1965 with a supporting role on the NBC series “The Wackiest Ship in the Army,” with Jack Warden. He appeared with Dale Robertson in the 1966-68 series “Iron Horse,” and in 1972 he starred in “The Sixth Sense,” a series in which he played a parapsychologist.
In 1974, he starred in a short-lived TV version of “Born Free.”
In 1967, he married Mary Ann Mobley, Miss America of 1959. The couple separated last year.
Besides his wife, survivors include their daughter, Marcy Clancy Collins; and two children from his first marriage, to Susan Peterson, Guy and Melissa Collins.
In recent years, Mr. Collins, a resident of Biloxi, had legal troubles, including convictions for drunken driving and leaving the scene of a traffic accident.
With a cheerful smile and good looks, Mr. Collins was known for his warm, welcoming style.
In an interview with The Los Angeles Times in 1989, he said he was unsuited for the tabloid talk-show format that was emerging: “That’s basically not a part of my character.”
SOURCE: New York Times, 10/13/2012