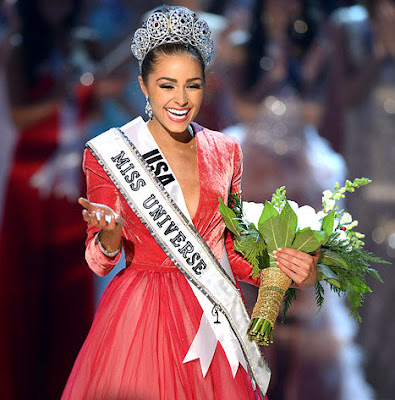 It's all about the gown!
Glamor, glitz, and glitches in cold December

The rest of the Top Ten included Elizabeth Golonova of Russia; Marie Payet of France; Agnes Konkoly of Hungary; Melinda Bam of South Africa; and Karina Gonzalez of Mexico. 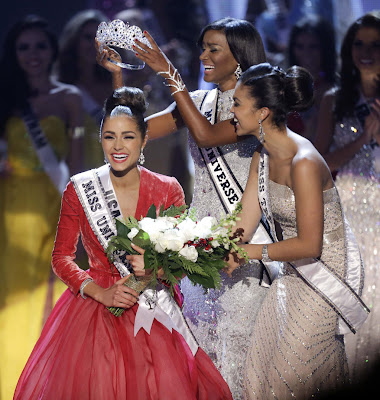 I had every intention of attending the pageant this year until MUO decided to push the dates further late in December. And since I had used all of my vacation weeks for this year doing other things (yes, I do have a life besides pageantry), I watched the live telecast in the comfort of my living room while tweeting about it. However, CB was able to cover the pageant thanks to Hector Joaquin who had attended the prelims, the national costume show, the Red Carpet event and the actual show at the theater. CB would like to thank MUO and its outstanding Public Relations team for granting CB access to all events leading up to the coronation night.

I must say that I really enjoyed the show, especially with the Christmas... err... Holiday theme! Who would have thought that pageant owner Donald Trump would open the show in a Santa Claus outfit? If memory serves me right, this was the first time that Trump had ever opened the pageant live on stage. Hours before the show, Trump had tweeted his favorite contestants under the guise of "pageant people":

And lo and behold - all six countries made the top 16! Trump made sure that his presence was felt during the entire telecast by doing the voice-overs. And even more so during the post-telecast press conference when he congratulated Olivia - this time - wearing a suit and his Trump-labeled tie. He made sure that the public acknowledged him as Olivia's boss.

Many pageant fans - especially Filipinos - were highly disappointed when Miss Philippines Janine Tugonon was not crowned the winner, considering that her answer to a Twitter question asked by judge Nigel Barker was the best and received thunderous applause from the audience. Her question was: "As an international ambassador, do you believe that speaking English should be a prerequisite to being Miss Universe? Why or why not?" And with confidence and conviction, Tugonon replied, "For me, being Miss Universe is not just about knowing how to speak a specific language. It's being able to influence and inspire other people, so whatever language you have as long as your heart is to serve and you have a strong mind to, to show to people, then you can be Miss Universe."

Compare Tugonon's response with Miss USA Olivia Culpo's response to a question asked by former Miss Universe Ximena Navarrete: "What is something that you have done that you would never do again?"  Her response, "First I'd like to start off by saying that every experience, no matter what it is, good or bad, you'll learn from it. That's just life, but something I've done that I've probably regretted would be picking on my siblings growing up because you appreciate them so much more when you're older, you get closer with your family. But everybody fights with their siblings, right? So... but I don't regret it."

And while Miss Brazil Gabriela Markus and Miss Australia Renae Ayris's responses to their respective questions seemed adequate, many fans are wondering how Miss Venezuela Irene Esser's confusing answer and poor delivery still managed to carry her to the 2nd runner-up spot. Esser had picked a question asked by singer/actor Diego Boneta: "If you could make a new law, what would it be? And explain why."  Watch her response:

And if you still didn't understand her, here's the transcript of what she said: "I think that any leys [Spanish for "laws"] there are in Constitution or in life, are already made. I think that we should have, uh, a straight way to go in our similar, or, eh, in our lives as is this. For example, I'm a surfer, and I think that the best wave that I can take is the wave that I wait for it. So please do our only, eh, law that we can do. Thank you Vegas!"

Say what? So let me get this straight. In 2010, Miss Philippines Venus Raj was bashed for her pedestrian "major, major problem" riposte that fairly justified her 4th runner-up position. An unwritten pageant code would claim that the Q & A segment would either break you or make you, but some of us in the business of training beauty queens do not always yield to this code. Any avid longtime pageant follower would know that there have been numerous cases when the candidate who gave the worst answer somehow managed to win, or that the one who gave the best answer ended up not winning at all. Eventually, it boils down to preference - which is entirely subjective. This may explain why Miss Venezuela placed higher than Miss Australia because the judges probably appreciated her bubbly personality more than her ditzy answer.

Two days after the pageant, a U.S.-based Spanish-language early morning show Un Nuevo Dia interviewed Esser and was asked about her dismal response, she claimed that there were too many things going on in her head which made it difficult for her to formulate a good answer and that her emotions stunted her linguistic best (although she could have answered in her native Spanish). She also said that Miss Universe owner Donald Trump had told her "It's the best answer I've heard in my life!" . When she asked him, "Did you understand what I said?" And Trump replied, "No, but you answered with so much confidence!"  (which, of course, was more patronizing than sincerely genuine). And when the other Venezuelan host of the same program asked her two questions: "Why didn't you answer in Spanish? And are you ready to be the most popular YouTube sensation?" - she answered: "I don't have any problem with that. The best thing is that people talk about you. I think some people will understand you, others will not." 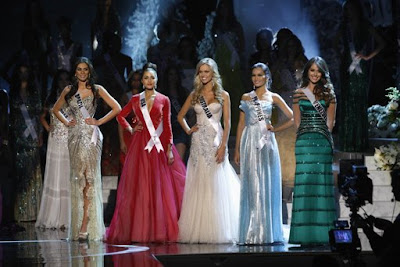 And speaking of gowns, did anyone notice that the top 5 finalists all wore colors that reflect the Holiday season? Gold, Red, White, Icy Blue and Green? I love Miss Brazil's form-fitting, strapless gold gown with a thigh-high slit which truly complemented her hour-glass bronze figure. Miss Australia's dress evoked a sparkly wedding gown fit for a beautiful bride. Although Miss Venezuela's tiered hunter green gown with mesh sleeves was the most distinct,  the "Christmassy" quality felt a little costumey for my taste. And although Miss Philippines looked radiant and executed the best stage projection, her gown could be taken as recycled version of Venus Raj's ribboned, metallic, strapless chiffon dress in 2010. Which leaves us with Miss USA's red (raspberry) velvet gown. 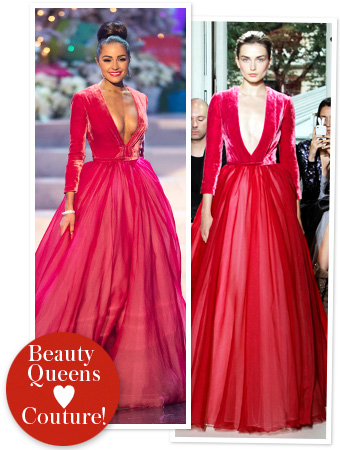 Culpo's gown came off the runway from Georges Hobeika's Fall 2012 couture collection. “When Miss Culpo and the fashion director of the Miss Universe Organization approached me about selecting this gown, I knew they wanted to do something drastically different and to break the mold of the typical pageant evening gown,” the Lebanese designer exclusively told InStyle.com. “I loved that Miss Culpo was so confident about wanting to make a statement, because that is very essence of why and how I design.”

Now you wonder why Miss USA - in spite of her mediocre response - won instead of Miss Philippines. It's because of the gown! Compared to the bedazzled and bejeweled gowns of the other four finalists, Culpo's gown was a royal standout in its sheer simplicity. It was different. But most of all, it had never been seen before, at least not in raspberry color on a world stage. With some adjustment - such as removing the white band that covered the cleavage and tailoring for a perfect fit - the gown certainly caught the eye of celebrity stylist Brad Goreski. When you have stylists or designers on the judging panel, you should always expect to be judged on your choice of gown, apart from how you wear it. Miss Universe has been flirting with designers since 2002 when Oxana Fedorova was crowned in an eye-stopping, strapless, high-waisted, white Gucci sheet gown.

Ever noticed that MUO has never invited so-called pageant experts/coaches to judge? Because these people care very little about fashion, much less about the business connection between beauty and fashion. Designers/stylists on the other hand are obsessed with perfection: girl gotta have the perfect hairdo, the perfect makeup, the perfect (fashion forward) dress, the perfect look. Olivia's idol is Audrey Hepburn, and like Hepburn, Olivia oozes with star quality - a trait lacking in the other contestants. That face. That beautiful face. It's commercial, it's fashionable, it's stylish. Photographer Nigel Barker would die to shoot her. And she's not a pageant patty either. Minutes after the coronation, Olivia said: “I never, ever thought that I would ever be here today. One year ago, in October, I entered the Miss Rhode Island Pageant, and I was in a $20 rental gown that was too short and had a hole in the back of it. I did not know how to walk onstage, I had never been in pageants or anything like that, and I just wanted to test my abilities and practice my interview skills."


Overall, I'd rate the telecast 3 1/2 stars out of 5. A few irritants: the sound glitch in the beginning of the show prevented the mention of the contestants from Angola, Argentina, Aruba and Australia. It was supposed to be a two-hour live telecast, but the preponderance of compressed narrative (pre-taped montages) felt rather overwhelming. The national costume competition - which took place a day after the prelims - was reduced to a 40-second montage that featured the ten best costumes, with China's strikingly unusual porcelain vase-inspired costume topping the list. It would have been nicer - just to keep up with the Holiday festive spirit - if all 89 contestants had introduced themselves in their costumes - like they would in the olden days - instead of theatrically challenged Sherri Hill cocktail dresses.

No offense to Michael Schwandt, but choreography was far less exceptional than last year's.

Bring back Andy Cohen and Giuliana Rancic next year. And the next. And the next. Great chemistry between good friends always makes for great hosting. 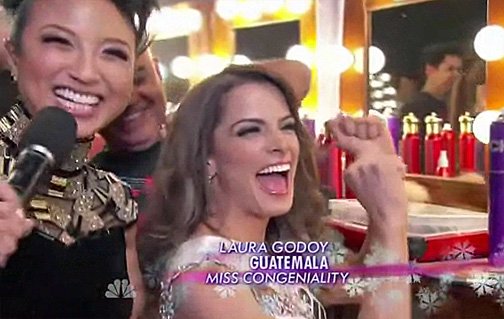 Good night, Las Vegas! Til next year!
The Judges