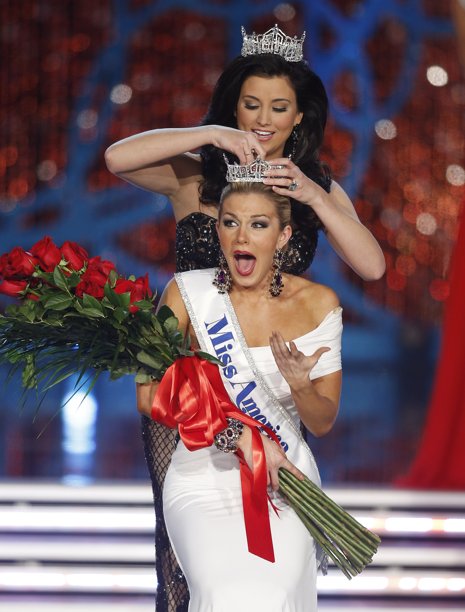 Mallory Hagan, 23, from Brooklyn, New York was crowned Miss America 2013 last night at the Planet Hollywood Resort and Casino in  Las Vegas. She won the pageant after tap dancing to James Brown's "Get Up Off Of That Thing" and answering a question about whether armed guards belong in grade schools by saying "we should not fight violence with violence." She wins a $50,000 scholarship and platform is fighting child sexual abuse. Hagan is the first New Yorker to win the title after Vanessa Williams who won in 1983. Williams was later dethroned. 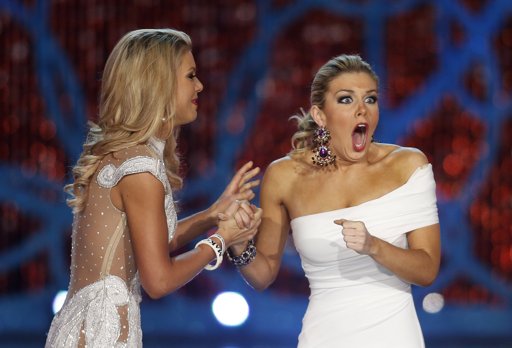 I watched the live telecast from home while giving Real Time updates via Facebook. In the talent competition, I was blown away by Miss Texas Danae Couch's  baton twirling to the tune of Donna Summer's "Last Dance." It's been a while since I've seen a Miss America contestant do a baton twirling and Miss Texas's performance confirms that baton twirling is the most exciting talent performance to watch! Three of the top five performed tap dancing (New York, Oklahoma and Iowa) but New York clearly outperformed the other two. The most pitiful talent performance was by Miss Tennessee Chandler Lawson who did a rendition of Adele's "Turning Tables." She was off key and she was just painful to hear. Another mediocre singer was Miss Maryland Joanna Guy who sang "I Dreamed a Dream" from "Les Misérables." Her voice was pitchy and not powerful enough for the song. One wonders how these two contestants advanced to the talent competition with such under average performance. Uggh.

I really thought that the crown would be between the two most facially attractive contestants: Miss South Carolina (who should cross over to Miss USA) and Miss Wyoming (who looked stunning playing the piano in a royal blue gown and a black lacy see-through dress in the evening gown competition). But Miss New York - perhaps with her more homely countenance that typifies a Miss America -  pulled a surprise and eventually won the judges' votes.