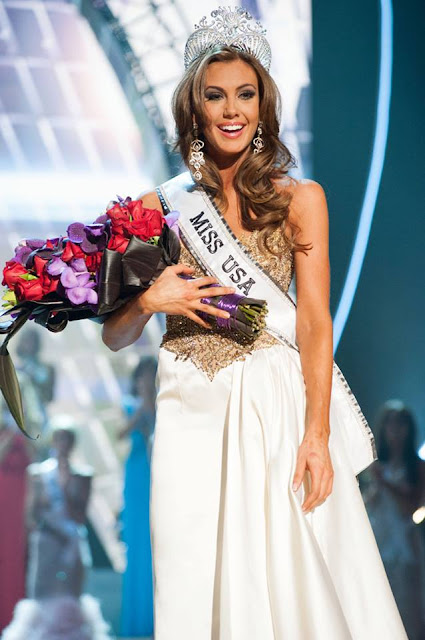 
Miss Photogenic USA Award was given to Miss Utah USA, Marissa Powell. A blue ribbon panel selected the delegate who exemplifies beauty through the lens of a camera. She was awarded a $1,000 cash prize. The Miss Congeniality USA Award was given to Miss Oregon USA, Gabrielle Neilan. The award reflects the respect and admiration of the contestant’s peers, who voted for her as the most congenial, charismatic and inspirational participant. She was awarded a $1,000 cash prize. Neilan learned about the award when color commentator Jeannie Mai approached her backstage to surprise her with the announcement.

I had originally planned on attending the Miss USA 2013 pageant in Las Vegas. I had already booked my hotel reservation and my JetBlue flight, but I ended up canceling my trip so I could continue my recovery from gall bladder surgery that I underwent on June 5th. I wanted badly to attend so I could cheer for my pupil, Sarah Kidd, Miss Massachusetts USA 2013, but as fate would have it, my recovery is taking longer than I had expected. Nevertheless, just because I have taken a medical leave of absence from work does not mean I have become totally useless; on the contrary, there was not a day that I didn't vote online at least ten times a day for Sarah, using all 5 of my various e-mail addresses! Ha! I'd like to think that my tireless voting - as well as the voting of many of Sarah's fans and supporters - earned her a spot in the Top 15. If not, then Sarah certainly earned a spot on her own merit!

So again, like last year, I watched the live telecast of the pageant in the comfort of my living room. I treated myself with a dish of sliced-up plantain sweetened by melted brown sugar, a large bowl of rice chips, and a small bowl of mixed nuts. I know, I know - bad carbs (the kind I wouldn't feed my pageant girls) - but I didn't care. I had lost 5 lbs. due to surgery and regaining a pound or two wouldn't be that traumatic, so I munched away! I had three gadgets ready to document the show - my laptop, my iPad, and my iPhone. In the olden days, I would jot down everything on a notepad, but I have gotten so used to documenting everything digitally that I have virtually lost all capacity to write in cursive fashion - except when I have to sign legal documents (which has even become quite a struggle! lol)

Anyway, as far as the telecast is concerned, I thought that it's nothing more than a slight downgrade from last year's, and I'll tell you why. First, the infamous fan vote. Could someone please tell me what exactly happened to it? The Miss USA website had been aggressively advertising for a 16th spot for the contestant who would receive the most number of online votes, but the actual telecast only named top 15 contestants. Did MUO (Miss Universe Organization) use the Top 16 gimmick only to draw netizens to the voting page which was sponsored by OPTX Rhode Island hoping that it would trigger massive purchase of fashionable sunglasses? Why, of course! It's business, you silly goose! Even if it entails false advertisement. So fans are left to wonder if the fan vote was integrated in the official scores or was eliminated at the last minute to give way to a new twist - selecting the 6th finalist via Twitter!

And guess who won the Twitter vote? Why none other than Miss Texas USA Ali Nugent! Never mind that the Pacific, Mountain and Central states had a delayed broadcast and therefore had not been informed of the Twitter Twist, which prevented fans from those regions to Twittervote for their favorite candidate from the rest of the Top 10! Gross injustice? Yes! I was already happy with the Top 5 (Alabama, Connecticut, South Carolina, Illinois, Utah), but the Twitter Twist just messed up my usually good projections! Adding Texas as the 6th finalist automatically ruined the other finalists' chance of getting a better placement or even winning, and this is what exactly happened to the adorable Miss South Carolina USA Megan Pinckney - whom I was expecting to place at least as 2nd runner-up, but ended up as a horrific 5th runner-up! Yeah, 5th runner-up! Since when has Miss USA been awarding a 5th runner-up? Never! Until last night! Blechhh! Overall, I don't think Twitter Heads should determine the outcome of the pageant, specially if they have zilch knowledge of how pageants work and how hard contestants prepare themselves for the competition.

A few days before the telecast, I had posted on my Facebook the following: "Pageant girls, please do not make a YouTube sensation of yourself!" I guess Miss Utah USA Marisa Powell didn't read my status. She was virtually on everyone's list as the favorite to win, and rightly so. Who couldn't resist those big, mesmerizing dark eyes? Those pouty lips? That hot bod? That gloriously CHI-iefied hairdo? No one. The judges were essentially giving her the crown, until she opened her luscious bouche. She was asked this question by judge NeNe Leakes: "A recent report shows that in 40 percent of American families with children, women are the primary earners, yet they continue to earn less than men. What does this say about society?" And here's her stumbling response:  "I think we can relate this back to education and how we are continuing to try to strive to … figure out how to create jobs right now and that is the biggest problem. Especially the men are um, seen as the leaders of this and so we need to figure out how to create education better so that we can solve this problem." Watch the video clip of her response on YouTube which has so far received over 1.6 million hits in less than 24 hours:


Powell's response immediately drew comparisons to Caitlin Upton, Miss South Carolina Teen USA in the Miss Teen USA 2007 pageant. When Upton was asked why a fifth of Americans cannot locate the United States on a world map, she gave a similarly convoluted answer - though much worse, including an explanation that “some people out there in our nation don’t have maps.” Upton became an international Internet sensation and sadly the butt of joke of practically every comedian or late night talk show host. Parodies of her answer soon became dime a dozen. It was reported that Upton increasingly became so despondent over the embarrassing incident that she struggled hard in the following years to shed her "bimbo" image. She made a guest appearance on the "Today" show in August 2007 where she was given a chance to properly respond to the question which she claims to have not understood completely. Upton's notoriety proved to be a double-edged sword: not only did she become a high-demand model with the Trump Modeling Agency, but she also received lucrative offers to appear in commercials and parodies exploiting her pageant mishap, as well as appearing on "The Amazing Race 16" in 2010. Despite her many attempts to shed her "bimbo" image, she will always be remembered as that "dumb" and "stupid" blond teen beauty queen. Will the same fate behold Powell? Yes, but nefariously less. Why? Because Powell is not blond.

To those of us who are involved in training beauty queens in the art of interview, we are well aware of the fact that no matter how well prepared a girl is, we always dread the possibility that she could have a brain freeze during the actual Q & A segment. Things could be worse: she could choke completely and walk away. Or things could be forgiving: she could fumble the first portion of her answer, but deliver with a good punch the last portion of her answer. Either way, there is no good or bad answer. It's all about sincerity and great delivery. Unfortunately, society tends to focus more on a person's failures and bad choices than on his/her successes and good choices. Yes, we've seen Miss Utah USA fumble her answer, but have we bothered to check her profile on the Miss USA website? It's rather outstanding: "Marissa Powell is a singer who has performed with her group ‘Geniveve’ in numerous venues across the state of Utah, singing the National Anthem for over 10,000 people at the Rocky Mountain Cup for ReAL Salt Lake, as well as writing and performing original songs for the past six years."

And much more: "As a model and an actress she has been involved in runway, print and film; featured in Fitness Magazine, television commercials and recently appearing on ABC’s What Would you Do? TV episode as a lead actress. She played volleyball throughout High school and was awarded All-Region two years in a row and Deseret News First Team All-State 5A Defensive Specialist of the Year 2009.  She played volleyball for Westminster College in 2010. Marissa’s community involvement includes volunteering for Primary Children’s Hospital for the last five years as a member of the Kids Crew in the Forever Young Zone. She plans on helping to promote programs at Primary Children’s Hospital this year during her reign as Miss Utah USA and serve as an ambassador for Healing Hands for Haiti International Foundation."

Heck, why didn't MUO make up questions based on the contestants' life experience instead? It would have been so much easier, right? Yes. But it would betray the essence of live TV that craves drama, spontaneity and surprises. You know how Trump loves publicity and sensationalism! And to Powell's unforgiving, harsh critics: I dare you to put yourself in her shoes, er, six-inch heels and face unknown questions under pressure, amidst all those blinding lights on stage and in front of thousands of people - and millions of televiewers around the world. Can you do it, huh? Can you do it? I'll give you one of my kidneys if you can.


UPDATE: June 18, 2013. Miss Utah USA Marissa Powell appeared on "Today" show this morning to try to redeem herself. Also on the same segment, Erin Brady appeared for the first time since she was crowned Miss USA 2013 two days ago.