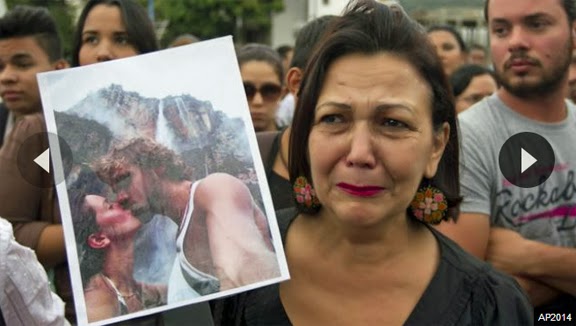 Venezuelan prosecutors on Wednesday evening announced the arrest of seven suspects in the killing of a popular soap opera actress and former Miss Venezuela, as hundreds took to the streets of Caracas demanding the government protect its citizens.
Robbers killed actress Monica Spear, 29, and her former husband, Thomas Henry Berry, 39, around 10:30 p.m. Monday on an isolated stretch of highway while the couple was returning to the capital by car with their 5-year-old daughter from a vacation.
Prosecutors also said in a statement that "various belongings of the victims were seized." The statement provided few other details aside from giving the names of five of the suspects — the remaining two are a 15-year-old and a 17-year-old.
President Nicolás Maduro hastily gathered state governors and mayors Wednesday to discuss the country's violent crime amid public outrage over the killings.
In a rare conciliatory moment during the meeting, Maduro reached out and shook hands with the main opposition leader, Miranda state Gov. Henrique Capriles, whom he defeated by a razor-thin margin in the April presidential election.
Capriles claims the election was stolen and the two have frequently exchanged insults. But Capriles said Tuesday that he was willing to put aside differences and unite against crime.
Along with everyday citizens, hundreds of actors and writers took to Caracas' streets Wednesday to demand protection from the callous killers that are giving Venezuela one of the world's highest murder rates.
More than nine in 10 homicides go unsolved in this troubled oil-rich nation, according to the independent Venezuelan Violence Observatory.
The slaying of the beauty queen followed a pattern of late-night attacks carried out by disabling cars with obstacles placed on roadways.
The director of the Violence Observatory, Roberto Briceño, said the killings "bring into relief a common reality of daily life in Venezuela," where his nonprofit group counted nearly 45,000 people slain last year — 79 for every 100,000 Venezuelans.
"One need not necessarily be flashing around signs of wealth to be a victim," Briceño said. The slain couple was driving a 2002 Toyota Corolla.
In his swiftly convened security meeting Wednesday, Maduro promised "better coordination" in the fight against crime. He called the killing of Spear "a slap in the face" but he did not propose any structural or personnel changes to law enforcement.
Opposition leaders including Leopoldo Lopez have blamed Spear's death squarely on the government, which Lopez called "an accomplice of armed groups, judicial corruption, arms trafficking" on Twitter.
Police said Spear and Berry tried to foil the assault by locking themselves inside their car, which had been disabled by tire punctures. But the attackers fired into the car.
A single bullet that entered through Spear's right rib cage killed her, said Katty Pulido, Spear's longtime manager, who said she spoke directly with police investigators.
Berry was killed by three bullets to his chest, while their daughter, Maya, was wounded in the right leg by a bullet that did not strike bone, Pulido added in a phone interview.
It was Maya who told police how the criminals killed her parents "out of vengeance," Pulido said.
"This is something that happens a lot in Venezuela," she said of fatal shootings during armed robberies. "They (the police) cover it up in a lot of cases but they can't when the victims are well-known."
Spear's parents arrived in Caracas late Tuesday from their home in Orlando, Florida, said Pulido, while Berry's parents had been with the girl at a private clinic in Caracas.
She said it was too early to say who the child would live with.
Spear was crowned Miss Venezuela in 2004 and was fifth runner-up in the Miss Universe pageant the following year. She had acted in numerous soap operas, most recently in "Pasion Prohibida" for the U.S.-based Telemundo network.
Based on reporting by The Associated Press.
Source: Latino Fox News, 1/9/2014