I WATCHED the live telecast from the comfort of my living room, like I did last year and the year before. I had originally planned to go to Baton Rouge to cover the pageant for Critical Beauty, but I opted to stay home instead for personal reasons. Besides, I am always guaranteed a good seat and the best view from my seat!

I must say that this year's production impressed me in more ways than one. First, the stage looked absolutely fabulous, and I am not using the adjective loosely. Oh, no. Fabulous as in "having no basis in reality; mythical." If I had gone to the theater, the stage would have looked too real, and eventually ordinary. But seeing the stage remotely from my living room, on television, generated a sense of awe: all of a sudden, the stage seemed majestic and grandiose, like fairy tales. The dazzling, huge lit chandeliers only enhanced the contestants' glamorous getups. And speaking of getups, notice the diverse styles of gown worn by each of the top 10 semifinalists below: 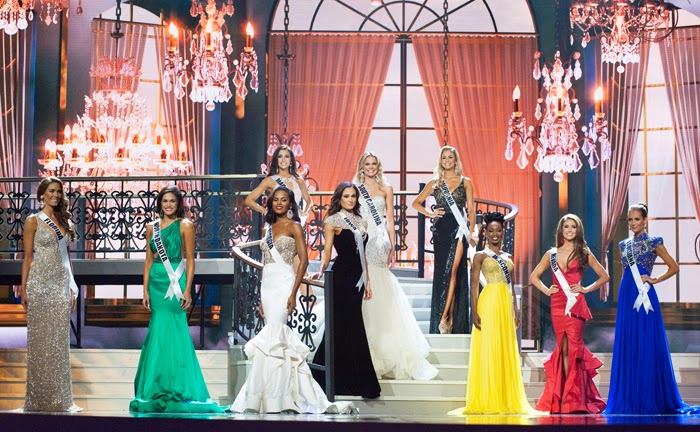 My eyes were immediately drawn to Miss Louisiana USA Brittany Guidry's empire-waist royal blue gown. To me, she had the most impeccable look - from head to toe (well, at least to the bottom of the dress). That gown was made for her. On Critical Beauty Twitter, I tweeted "LA Queen" (short for "Louisiana Queen"). Her detractors might say that her gown was old-fashioned and hideous, but these are the same people who are perhaps culturally and historically illiterate. If they had done some research, they would have at least speculated that Brittany's gown was probably inspired by Empress Josephine de Beauharnais (Napoleon I's first wife), and thus she was emoting the Empire look - much like this Josephine Barbie doll: 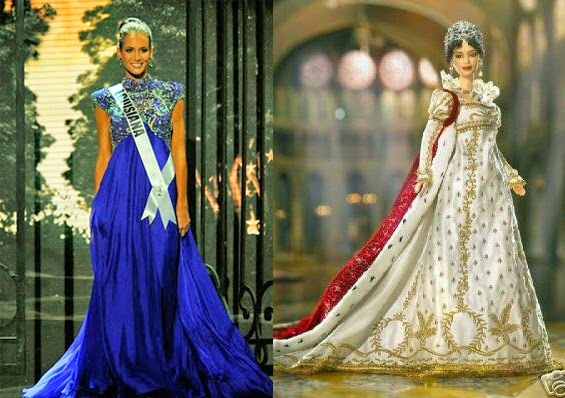 The pageant, after all, took place in an area which was part of a much bigger area that used to be controlled by the French, until the United States paid the French $50 million dollars in 1803 to acquire this huge territory stretching from Montana to what is now modern-day Louisiana. Does the Louisiana Purchase ring a bell? So yeah, as a Francophile, I could not ignore the French Empire subtext in Brittany's gown. The Mardi Gras theme was immediately evident when all 51 contestants "rode" on stage in quasi-floats, each waving a mask. Bright lights, prominent carnival colors, cascading confetti, boisterous Bayou sound and the vibrant energy emanating from every corner transformed the show into a veritable audio-visual feast. 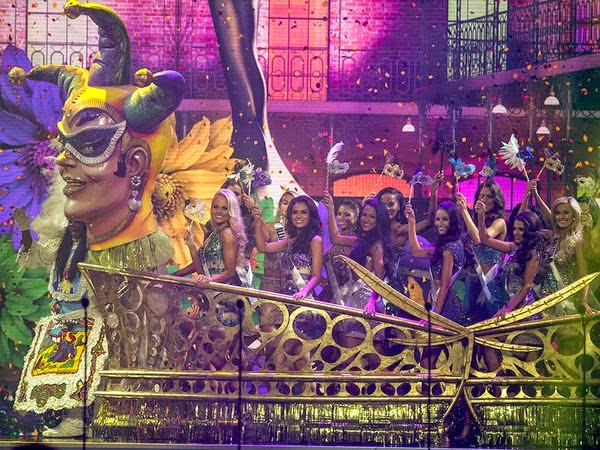 Perhaps the most significant aspect of all was the change in the format. For decades, viewers have been accustomed to a two-hour show where all 51 contestants were whittled down to 15 semifinalists, and then to 10, and then to the final 5. This time, there was a top 20 - which was cut in half after the swimsuit competition. Nothing wrong with that. In fact, it was great! Adding five more girls to the usual Top 15 actually increases the excitement and tension in the theater as the girls' supporters continue to cheer for her. Now we understand why a third hour was added. Since time immemorial, many fans had been badgering the Miss Universe Organization (MUO) for not giving the girls substantial airtime, protesting that most of it is spent on promoting sponsors (like CHI executive Farouk Shami and his glossy red shoes). Another new element that I find innovative was the introduction of the judges on stage. We're so accustomed to see the judges being introduced while they are already seated, thus it is a breath of fresh air to see them come out, to see what they wear, to strike a pose, and to share the limelight with all 51 contestants on the same stage.

At last, MUO yielded to the fans' demand. They got exactly what they wanted. However, some fans did not appreciate the seemingly interminable revelation of the top 20, as it took away the thrill and the excitement. The announcement of a semifinalist was immediately followed by a quasi-biographical hometown video which lasted an average of 1 minute, but which probably felt like an eternity. Imagine the remaining 31 contestants who had to endure standing on their heels - and anguishing over their elimination - during this lengthy revelation. Well, they certainly got plenty of air time. However, their lengthy standing on stage is not as painful compared to the one of contestants in the 1970s and 1980s when everyone of them had to remain on stage until after all 10, 12, or 15 semifinalists had been interviewed for two or three minutes long. Perhaps the most telling aspect of the top 20 format - the first ever in the 62-year history of the pageant - is that this year proved to be extremely competitive that MUO was compelled to add five more girls to the usual roster of top 15.

I find it odd that despite the highly entertaining quality of the show, there was hardly any humor in it. The co-hosts Thomas Roberts and Giuliana Rancic made a cute couple, but I doubt if they could even bring a smile to any of the Nigerian girls kidnapped and enslaved by the Islamic terrorist group, Boko Haram. Color commentator Jeannie Mai's comments absolutely brought nothing new or fresh that we avid pageant fans did not already know or expected. She's got to go, and should be replaced by someone who had actually competed in Miss USA and whose opinion truly matters to pageant followers. If you have to look for unintentional humor, it is in Miss Maryland USA's gaffe for not removing her mask as she introduced herself. It is also in Farouk Shami's playful comportment and footwear while judge Rumer Willis was reading her question to Miss Nevada USA. And lastly, in the shy guy in the background whose face didn't want to be shown on TV while judge Ian Ziering was reading his question to Miss Louisiana USA. Why even bother sitting in the front row if you didn't want to be seen on TV? Heck, if it had been me, I would have been making faces and brandishing a Critical Beauty banner!

Karma gotcha? Months before the new Miss USA was crowned, I had solicited all 51 contestants to do an interview with Critical Beauty. Twenty-six of them graciously took the challenge; some of the remaining twenty-five did not respond or acknowledge my request - either on social network or e-mails with their respective state directors. The titleholders from Ohio, Connecticut, Oregon, Vermont, Wyoming, Virginia, and Oklahoma all replied that they would submit their interview answers "as soon as possible,"  but they never did (which makes you wonder if they understand the concept of commitment or that they were too lazy to answer the questions). California's state director, Top10 Productions, had the audacity to inquire about the authenticity and reputation of CB and ended up declining my request. Tennessee has "seen" my Facebook PMs but never had the courtesy to reply. So I felt nothing but contempt towards the delegates from these states for being rude and disrespectful, and I swore that I would not promote them on this site, on Twitter and on Facebook. So imagine my relief when none of these girls advanced any further. Haha. MUO, please take note of state directors who shun the media and turn down interviews, because clearly these directors have no interest in promoting their titleholder and your company. And take note, too, of state titleholders who think they're too good to be interviewed by the world's most fabulous pageant website!

As for the results, I was disappointed that my personal favorite, Charisse Haislop, Miss West Virginia USA, was not called to the top 20. Of all the delegates with whom I have corresponded regarding the interviews, Charisse never failed to acknowledge my e-mails. She was always so gracious, warm and kind - traits of a true beauty queen. On the other hand, I did not expect for Carlyn Bradarich, Miss Iowa USA, to even make the top 10; did she hire a public relations firm that sent those "#savethequeen Iowa" tweets that saved her? Whatever she did, it certainly worked in her favor; although I would have replaced her with the bubbly Haley O'Brien, Miss Minnesota USA, or with the charming Amanda Soltero, Miss Nebraska USA. Nevertheless, Carlyn's fifth runner-up position was the best placement for Iowa since Carol Morris won the Miss USA 1956 crown representing the Hawkeye State.

I didn't have Nia Sanchez on my top 5 at all, and when she and Audra Mari were the last two standing, I was rooting for Audra to win because she was Miss Universe-ready. Audra was first runner-up in Miss Teen USA 2011, and it is heart-breaking to see her place second again this time. It is too bad that a state titleholder can only compete in Miss USA once, because if this rule were broken, then exceptional girls who almost won in the past could return and try again - which is the case in several pageant-crazy countries. Let's hope after Audra's reign as Miss North Dakota USA, or until she has fulfilled her commitment with MUO, that she will consider competing in another worthy pageant like Miss Earth United States, or get handpicked by the American franchise holder to represent the U.S. in Miss World 2015 or 2016.

The best and the worst: The real stunner of the evening was none other than my favorite Miss Universe from Venezuela, Barbara Palacios, who was one of the 9 celebrities invited to judge the pageant. There is a certain truth that beautiful women start looking even more beautiful with age, but only if they possess Barbara's natural elegance, poise and passion for life. To think that she was crowned Miss Universe almost 30 years ago (1986), looking even more stunning than some title holders fifteen or twenty years her junior. I was looking forward to her being interviewed by Jeanne Mai during the live telecast, or at least her name being picked by a Top 6 finalist during the Q & A portion, but alas, neither moment materialized. And that was the worst - not hearing Barbara speak.

And lastly, outgoing queen Erin Brady never looked beautiful when she reappeared on the stage to do her final walk and farewell speech.